Is there any device which allows the flow of electricity after certain wattage? [closed]

Is there any device which allows the electricity to flow only after a certain wattage and not below it ? Something reverse of circuit breaker

What you ask for can't work. You have a fundamental chicken/egg problem.

You only want to switch on a load if it would take a certain minimum power. However, you don't know how much power the load would take without switching it on first.

This simply doesn't work in the general case without having special knowledge about the load.

Is there any device which allows the electricity to flow only after a certain wattage and not below it?

Strictly speaking, no. Because say you had this:

So the idea is to close SW1 when the power (wattage as you put it) reaches some value.

More possible is something that allows current to flow when voltage reaches some point. You asked for something "reverse of a circuit breaker", and this thing is called an antifuse. It is a device that is open (allowing no current to flow) until the voltage across it reaches some value. Then it becomes closed.

Antifuses are what make your Christmas lights keep working when one burns out.

Since power being dissipated by a resistor will cause the resistor's temperature to rise, using a thermistor to detect that temperature rise and, through the use of proper circuitry, to send current (the flow of charge/electricity) through a relay coil once a particular temperature/power level has been detected, will meet the criterion described in your subject line.

The closest thing I can come up with is a triac or SCR, with logic on the gate that looks at the voltage drop across a fake load. You'd have current going through the fake load, but it wouldn't be going through your real load.

I suppose you could rig a load to operate via spark-gap, but they are not exactly consistent devices, as a rule. And that's not really sensing "potential wattage use of the load," just voltage across the spark gap.

If the load is purely resistive, a smart device (e.g. microcontroller plus surrounding power supply control and sensing circuitry) could be built which periodically probes its resistance by generating a small voltage pulse and sensing the current. If the resistance is too great for the load to dissipate the minimum wattage, then this gentle probing process simply continues. If the resistance is in the right ballpark, then the power supply is operated "full throttle": the full voltage is applied to the load. While the voltage is applied to the load, the device continues to measure the current; if that drops below the required value, it shuts off again. (This could happen, for instance, with filament which has a low resistance which rises when it gets hot). The software running the device could contain some algorithmic safeguards to prevent oscillating on/off behavior, like exponential backoff in situations when the device doesn't stay on long enough, and the application of a hysteresis (a higher value of estimated wattage is required to turn on, a lower one to turn off). With a reasonable sample rate, device could also detect that the load is disconnected and reconnected, by noting the brief moment during which the current in response to the sensing pulse is zero. When a "misbehaving" load is detected, whose wattage drops below the threshold as soon after power is applied, the device could go into a mode in which it probes for the load to be removed. Only when it detects that a load is disconnected and reconnected does it then try the procedure again with the new load.

Obviously, we are not meeting the letter of the requirement ("no electricity flows"). Rather, we have a trickle of electricity to try to estimate how the load will behave when full power is applied.

There is no telling what the load will do (and consequently, whether it should be powered or not) without passing some electricity through it.

You can try a motor starting (current sensing) relay. These are used for switching in the starting circuit when a single phase motor starts up, and switching it back out once the motor is up to speed. You spec them based on the current you want them to switch at. These come as both solid state, and electromechanical devices. you will have to do some math, and maybe add another relay to get the type of contacts you want (NO/NC).

Klixon is one manufacturer. 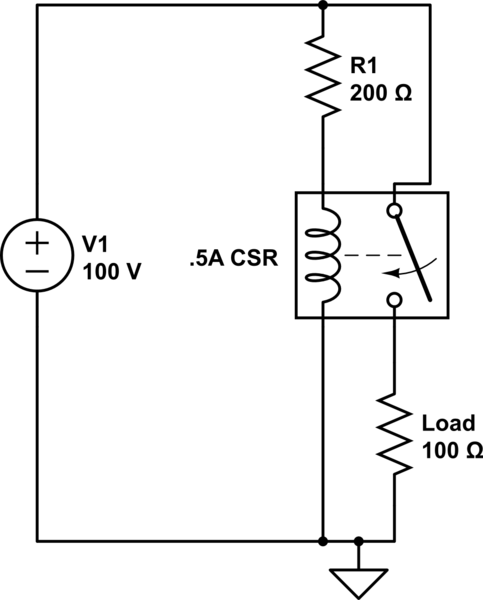 (Assume the pickup and drop out current is the same, you wont find one but this simplifies the example)

The wattage of the load is proportional to voltage squared time resistance. in my example above the load will draw 100W at 100 volts. I sized R1 and the current sensing relay so that the relay would energize when circuit voltage is >= 100V.

Obviously if you are working with AC the nature of you load will change (R->Z) but the idea is similar.

yes this will always have parasitic losses, and there is a better way via a transistor, but this is close to what you want and not too difficult to understand.

Not the answer you're looking for? Browse other questions tagged relay power-electronics solid-state-relay circuit-design or ask your own question.

21
Burned out filament but the light bulb has small resistance

1
SSR with low-flow switch to control heater
2
How to be sure a SSR has not been damaged when its circuit breaker has tripped?
0
What relay for high power circuit, low power controller?
0
Input Protection Diodes Functioning with Circuit Breaker?
0
High side power consumption measure reversible circuit
4
Why does electricity flow into a capacitor (charged the other way round) but not into into a diode in this circuit?
4
Is there any meaning attached to the Zener diode symbol?