I wish to power my circuit with a Lithium-ion battery LIR2032 (around 40 mAh capacity). These batteries have a voltage that goes from 4.2V to 3V typically during their discharge cycle.

My circuit (running at 3.3V) has a maximum current requirement of around 20mA -- although I should state that this is only the peak draw occurring in less than 0.1% of the time; the circuit draws below 1uA the remaining 99.9% of the time. It will be a sensor node which every 30s wakes up and emits data using nRF24.

What would be the best way to efficiently convert the (changing) output voltage of a Lithium-ion battery to less than 3.6V which is required for the MCU?

Efficiency is very important here, because of very limited capacity of the battery. Also I have no problem with varying voltage because the circuit can work with 3.0 or less, so it does not have to be precise 3.3V or similar, just need to be below 3.6 at all times.

EDIT: I come to an idea, I can find MCU which is capable up to 5.5V (so it can work directly from battery). So only for nRF24 module lower voltage is required. Please look at schematic. What do you think? The idea here is to turn on transistor only when required (transmitting). And even base current is used so only losses are in transistor (for voltage dividing).

Under most circumstances, efficiency might imply a switchmode regulator, but the lowest quiescent current available is about 3µA or so, as with this regulator.

As that is quite a deal more than your circuit uses for most of its life, an ultralow Iq linear LDO regulator may be better suited to this application as current from the battery is the key here for long life.

The lowest Iq regulator I have found (I have some products in an energy harvesting application) is the TPS783, with a headline 500nA quiescent current.

There are other options, such as the NCP4681 with 1µA quiescent current.

I am sure there are others out there, but 500nA for a regulator is extremely impressive.

If you set V(reg) to 3V (the nominal minimum for most 3.3V devices), then you should have a battery useable to <3.2V

As you intend to use some solar energy, an Energy harvesting solution might be the way to go.

You might be able to get away without any voltage regulation at all.

I'm successfully running an Atmel ATmega328 with a nRF24L01+ transceiver straight of a 2032 cell. The mega328 and nRF24 don't really seem to care about the voltage.

What was really important in my setup were the decoupling caps directly on the nRF24L01+ module. As soon as I soldered 100n ceramic caps onto the VCC and GND pins of my RF transceivers, everything worked fine.

Also: with many MCUs this setup allows you to measure your own battery voltage which (for a remote sensor node) might be very nice to have.

Just recently read an app note that targets your same circumstances. Using power solutions to extend battery life in MSP430 applications By TI's Michael Day. While it uses the MSP430 as its target, the same applies to any MCU.

Depending on the MCU's Current vs Voltage, and Voltage vs Clock Speed, using a low Iq LDO will be much better than powering the MCU directly off the battery. The example uses 2x AA, and a TPS780xx regulator with 0.5µA IQ, at 90% efficiency. The active mode current difference is ~175µA. 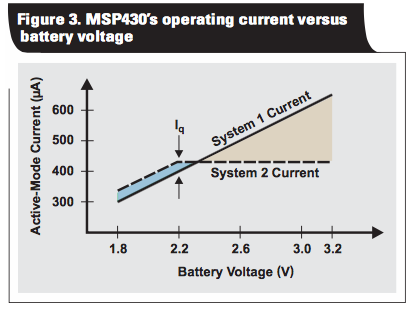 In this second example, System 1, with the MSP430 powered directly from the batteries, operated for 223 hours before shutting down. System 2, which used a TPS780xx to drop the MSP430 operating voltage to 2.2 V, operated for 298 hours before shutting down. The addition of the TPS780xx LDO, which operates at 90% efficiency with these operating conditions, extended battery life by 30%.

Later on, it even compares the Low Power Mode/Sleep currents:

While specifics are important, using a low Iq LDO, and targeting the lowest voltage your MCU and the radio can use, you'll cut down on the current required compared to straight off the battery.

You want to use LIR2032 because you want to charge it from a solar cell. The easiest solution would be just not to charge it over 3.6V. Place a zener diode across the battery. Internal resistance of a small solar cell should be enough to limit the current flowing through the zener diode.

46
Regulated 3.3V from a Lithium-ion (or LiPo) battery