Difference between latch and flip-flop?

What is the difference between a latch and a flip-flop?

What I am thinking is that a latch is equivalent to a flip-flop since it is used to store bits and is also equivalent to a register which is also used to store data. But after reading some articles on the internet I found differences between latches and flip-flops based on edge triggered and level sensitive functionality?

What does that mean? Is a flip-flop the same as a latch or not?

The basic difference is a gating or clocking mechanism. For example, let us talk about SR latch and SR flip-flops. 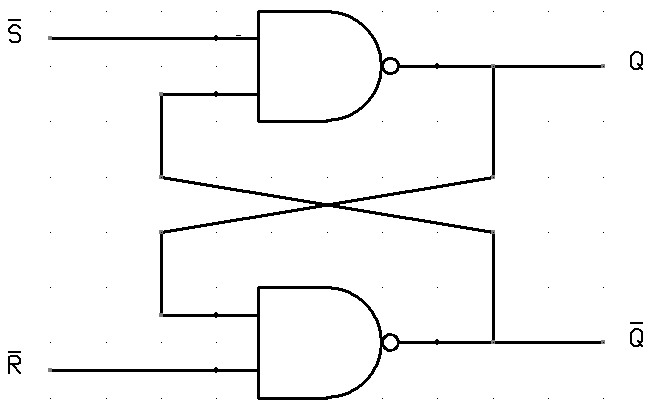 In this circuit when you Set S as active the output Q would be high and Q' will be low. This is irrespective of anything else. (This is an active low circuit so active here means low, but for an active high circuit active would mean high)

An SR Flip-Flop (also called gated or clocked SR latch) looks like this.

In this circuit the output is changed (i.e. the stored data is changed) only when you give a active clock signal. Otherwise, even if the S or R is active the data will not change. This mechanism is used to synchronize circuits and registers so that the data does not change unnecessarily.

A flip flop is built from two back to back latches with opposite polarity clocks, which form a master slave topology.

The type of latch is irrelevant (JK, SR, D, T) to this constraint, but it is important that the transparency is controlled by some pin (call it clock or enable or whatever you like).

SR latches throw everyone for a loop because the most basic design is transparent all the time. So, once the clock enable is added people start calling it a flip flop. Well, it isn't; it is a gated latch. You can build a SR flip flop out of two gated SR latches however:

Flip flops are edge triggered and the setup and hold times are both relative to this active edge. A traditional flip flop will not allow any time borrowing through cycle borders, since the master-slave topology acts like a lock-and-dam system to create a hard edge at the active clock.

A very common design trick when you need to squeeze every picosecond out of a path is to spread the flip flop apart (into two seperate latches) and do logic in between.

Basically the setup and hold times are completely different between a latch and a flip flop; in terms of how the cycle boundaries are handled. The distinction is important if you do any latch based design. A lot of people (even on this site) will mix the two up. But once you start timing through them the difference becomes crystal clear.

Just showing a t-gate based D-flip flop (notice it is built from two back to back t-gate based D latches with opposite phase clocks). 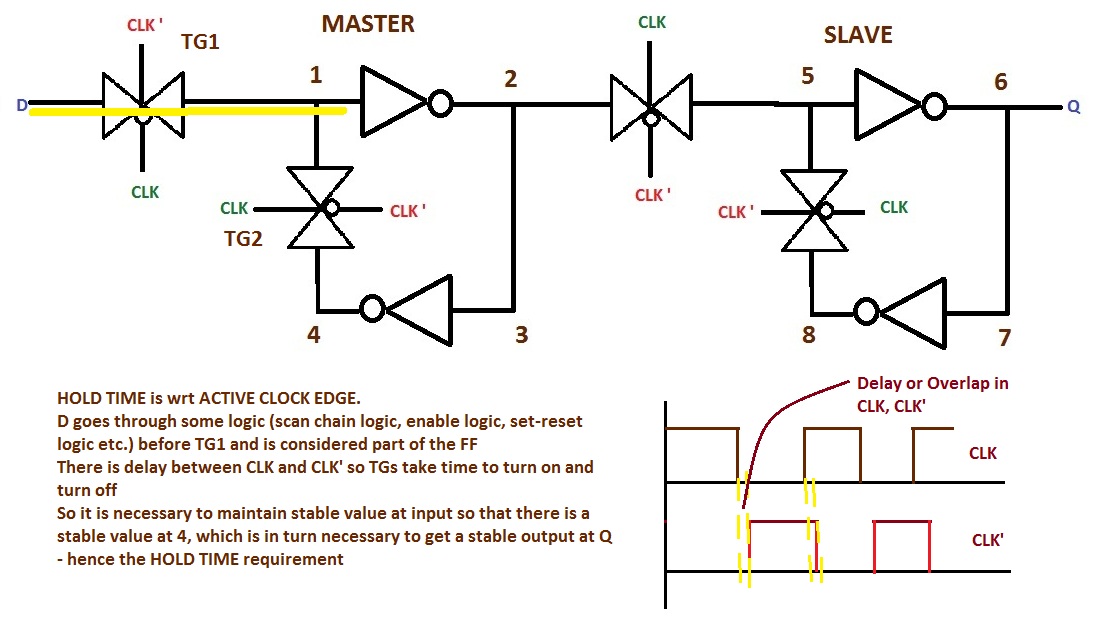 A latch passes the input data thru directly in the open state, and freezes the output in the latched state. The latch responds to the level of the control signal.

There are various types of flip-flops, but basically these change state on the edge of the control signal, and in some cases the data input(s). A classic D flip-flip is most like a latch, except it only looks at the input on a particular edge of the clock and freezes the output all the remaining time.

A latch is an example of a bistable multivibrator, that is, a device with exactly two stable states.
These states are high-output and low-output.
A latch has a feedback path, so information can be retained by the device.
Therefore latches can be memory devices, and can store one bit of data for as long as the device is powered.
As the name suggests, latches are used to "latch onto" information and hold in place.
Latches are very similar to flip-flops, but are not synchronous devices, and do not operate on clock edges as flip-flops do. 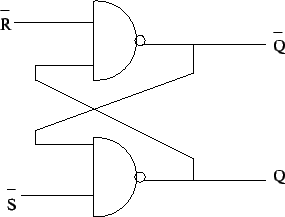 A flip-flop is a device very like a latch in that it is a bistable mutivibrator, having two states and a feedback path that allows it to store a bit of information.
The difference between a latch and a flip-flop is that a latch is asynchronous, and the outputs can change as soon as the inputs do (or at least after a small propagation delay).
A flip-flop, on the other hand, is edge-triggered and only changes state when a control signal goes from high to low or low to high.
This distinction is relatively recent and is not formal, with many authorities still referring to flip-flops as latches and vice versa, but it is a helpful distinction to make for the sake of clarity.

The difference between latches and flip-flops is, their outputs are constantly affected by their inputs as long as the enable signal is present. When they are enabled, their content changes immediately when their inputs change. Flip-flops have their content change only either at the rising or trailing edge of the enable signal. This enable signal controls the clock signal. After the rising or trailing edge of the clock, the flip-flop content remains constant even if the input changes.

The difference is in the intended use, mostly. A flip-flop is a general idea and has variations - how it is triggered, JK inputs or D, and all that. Flips can be used for counters, shift registers and all the other uses found in texts and online articles about flip-flops.

A latch is one particular use, where a set of flip flops (could be as few as one, I suppose) is given boolean levels, clocked, and thereafter hold those values constantly on their outputs. A snapshot, so to speak, of a binary value. No altering of the outputs values occur, except when new inputs are clocked in, or the latch is cleared which means setting all outputs to zero.

D-type flip flops are the obvious choice, but exactly what you use or how it is triggered isn't vital to the idea of what a latch is, even if important in the particular circuit or chip you're designing or using.

While transparent latches may be used in many ways, it's important to understand at least two usage scenarios. In one scenario, the latch is used to turn a signal that will sometimes hold valid data and sometimes hold invalid data, into a signal which will always hold valid data. This is done by keeping the latch in the "hold" state any time the data input might not match the desired output data. To change the latched data, one would put the desired data on the input, then set the latch briefly to "track" state and back to "hold" state, being careful that the data input does not change to an unwanted value while the "hold" signal is active. This arrangement could be used to e.g. control 64 outputs using eight control signals and eight data signals. Each control signal operates eight latches, one of which is wired to each of the eight data signals. One could use edge-triggered flip flops just as easily as latches, but the circuitry for a latch is somewhat simpler. Note that an edge-triggered flip flop in this scenario would ideally trigger on the transition from "hold" to "track".

In the second usage scenario, the input may not be meaningful at the time the latch switches to "transparent", but will become meaningful prior to the latch switching to "hold". If the devices that use its output won't care about its state until some time after the latch has switched to "hold", then it will be the state of the data input at that time which will be fed to the output. One may be able to use an edge-triggered flip flop in this scenario, but it must trigger on the transition from "track" to "hold". Note that if the data input to the latch becomes valid a significant time before the transition from "hold" to "track", the output will do likewise. By contrast, the output of a flip flop would only become valid when the clock changed.

The main difference between latches and flip-flops is that for latches, their outputs are constantly affected by their inputs as long as the enable signal is asserted. In other words, when they are enabled, their content changes immediately when their inputs change. Flip-flops, on the other hand, have their content change only either at the rising or falling edge of the enable signal. This enable signal is usually the controlling clock signal. After the rising or falling edge of the clock, the flip-flop content remains constant even if the input changes

antonioantonio
11
\$\endgroup\$
2
Add a comment  |
Highly active question. Earn 10 reputation (not counting the association bonus) in order to answer this question. The reputation requirement helps protect this question from spam and non-answer activity.

27
What is a flip flop?
9
What is race condition in flip-flops?
2
Differences between flip-flops and gates
2
master slave flipflop and edge triggered flip flop
0
*how* are things triggered on clock rise, fall, high or low,
0
SR latch and SR flip flop difference
0
Apparently correct D-flipflop implementation breaking my circuit. When using built-in D-flipflop, the circuit operates correctly
0
What's wrong with my interpretation of what should happen in the circuit and what's happening?
0
How to simulate a d-flip flop counter/divider?
0
RS Flipflop Truthtable for Q=1 and Q* = 0
See more linked questions