What happens when a BJT doesn't draw enough \$I_c\$ to be properly biased?

I have a basic circuit, that looks like it's an except from the Electronics 101 textbook if you smudged out some of the numbers on the diagram out: 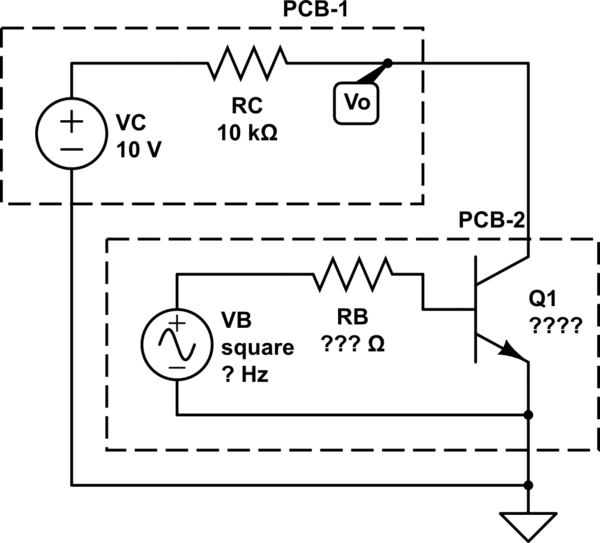 I have a large number of these circuits installed in hard to reach places, and I'm having a problem where sometimes they miss pulses, at different rates for each of the installations (some of them work all the time, some work some of the time, some always miss pulses).

My broad-strokes understanding of the practical behaviors of BJTs--the ones I care about at least--is that they can be:

Given this understanding of BJTs, my gut theory is telling me that \$R_C\$ is on the edge of being too high--thus limiting \$I_C\$--and the random variability in the properties of the BJTs explains why some of my installations work and some don't.

Since I have no idea what the amplitude is for \$V_B\$ or what the magnitude is for \$R_B\$ are, I went googling around for a graphical diagram that would show me the relationship between \$I_C\$ and \$V_{CE}\$ for a given \$I_B\$. Wikipedia yielded this: 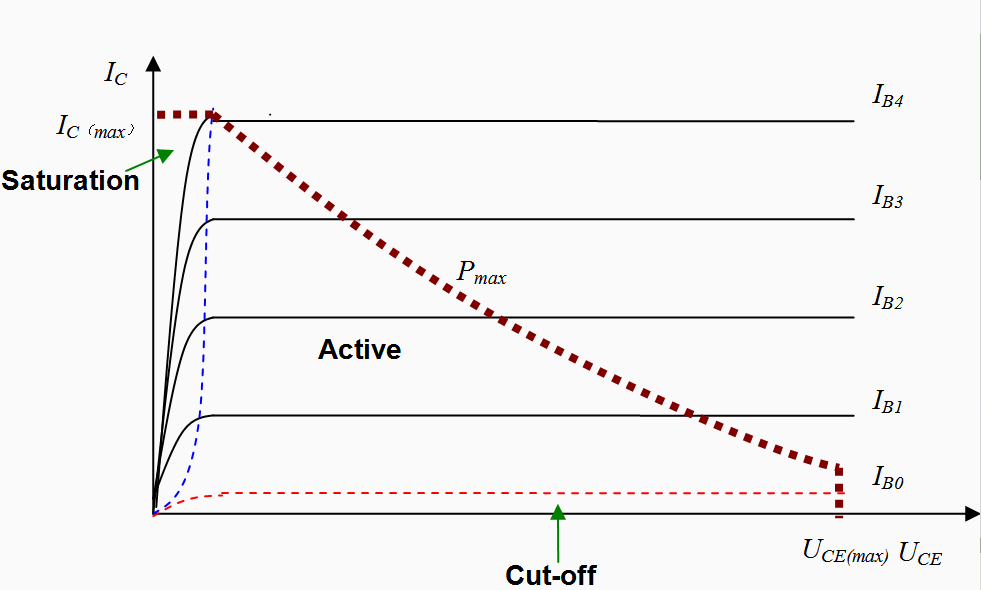 This graph confuses me, because it seems to suggest that, for a given \$I_B\$, reducing \$I_C\$ will reduce \$V_{CE}\$ (which is the same as \$V_o\$ in my circuit). Furthermore, while I can find several other versions of this graph online, I have yet to see on that labels the \$I_C\$ axis with units--is a typical order of magnitude for \$I_{C(max)}\$ in the \${\mu}A\$ range or \$mA\$ range or some other fractional amperage? Finally, my gut was telling me that I might be able to put in a resistor in parallel with \$R_C\$ to increase current to the collector in order to better bias the \$CB\$ junction, but the graph seems to suggest the opposite--I should put a resistor in series to decrease the current if I want a \$V_o\$ which is more consistently closer to \$0\$ when \$V_B\$ is high.

None of the components in this circuit are components I actually supplied myself. I have two devices--one a custom-programmable controller with digital inputs designed to detect dry contact closures (PCB-1), the other a monitoring device that uses a solid-state component to out a pulse whenever an event occurs (PCB-2). The components I am showing are what I have been able to determine are internal to these two printed circuit boards from previous experience with devices of this type and measuring the terminals I can get to. The connections between these two devices is all 18-ish gauge wires and screw terminals

The pulse widths from PCB-2 have been reduced to very slow (150ms) but pulses are still missed. On/Off detection thresholds for PCB-1 have also been adjusted to no avail. The only thing that has been found effective in avoiding missing pulses is to replace PCB-2 with a device from a different manufacturer that is the same in all relevant respects, except it uses a dry contact output instead of a solid-state output. That is why I suspect the BJT, but my theory of "maybe \$R_C\$ is too big?" doesn't seem to line up with how BJTs actually work.

This is the expected behavior. Although we usually express it the other way around: Increasing \$V_{ce}\$ increases \$I_c\$, although this effect is small in the active region.

I have yet to see on that labels the \$I_C\$ axis with units--is a typical order of magnitude for IC(max) in the μA range or mA range or some other fractional amperage?

Typical range is from 10's of mA to a few amps. A transistor only able to carry microamps would have limited applications, although such a thing might exist, for example within an integrated circuit. In the power industry there might be BJT's capable of carrying 10's of amps, however nowadays such things are more likely done with power FETs or insulated-gate bipolar transitors (IGBTs)

Finally, my gut was telling me that I might be able to put in a resistor in parallel with RC to increase current to the collector in order to better bias the CB junction, but the graph seems to suggest the opposite--I should put a resistor in series to decrease the current if I want a Vo which is more consistently closer to 0 when VB is high.

Correct, you should increase the value of RC in your diagram to obtain a lower output voltage when the input is high. However, you will have a difficult time achieving an output voltage less than about 0.2 V. This should not present a problem for your application since a microcontroller digital input will almost surely consider 0.2 V to be a logical 0.

This could be due to the nature of the pulses (are they strong enough to drive the base of the BTJ?), or due to how you are reading them at the microcontroller: are you using an interrupt-enabled input to capture them or polling? Are you polling frequently enough? Is your interrupt handler returning quickly enough to capture repeated pulses? etc.

Lets step back a moment and simplify this, before going this deep into graphs. First of all, the peaks of the VB square wave must exceed 0.6V for the circuit to even possibly work, because the BE junction will not conduct below that point. By the same token, if the low point in the square wave generator is above 0.6V, you could have the opposite problem.... where the the transistor BE junction is always conducting. Either condition on the "edge" of being true could be the root of the problem.

Next, assuming the low and high of the waveform are safely below and above 0.6V, respectively, whatever the peak voltage of VB is, minus that minimum 0.6V can be divided by RB to find out how much current is likely going into the transistor BE junction. I say "likely" because we also don't know what the effective internal resistance of the VB source is. But assuming it is negligible compared to RB, the next step is to multiply that current by the forward current gain of the transistor, commonly referred to as "hfe". If you don't know, you can assume at least 50 for a starting point. You can then take that number and use ohms law to see what the current through the 10K collector resistor should be at the peak of the pulse. In turn, that current can be multiplied by the 10K (E=IR) to approximate the voltage across the 10K resistor during those peaks. If the circuit is properly designed, that voltage will be close to 10V, because the transistor is simply being used as a switch, and should be in "saturation".

Now again lets back up even more, because it should be obvious that even the above simplification is meaningless with this many unknowns. I'd be curious how you ended up with a "large number of these circuits installed in hard to reach places", without first nailing down some of these unknowns, but that's beside the point. The point is, the only way to troubleshoot the problem in your situation is to take measurements, starting with the high and low voltage at the VBE junction. And since you don't know the width of the pulses from the square wave generator, this measurement will have to be taken with a scope. The fact that the circuit works sometimes is a good thing. In addition to nailing down the voltages at the output of the generator and at the transistor BE junction, a scope will also reveal any slow (less than square) wave forms. That could, for example, indicate the need for an additional resistor across the BE junction, not so much to alter the current dynamics, but to speed recovery time if fast closely spaced pulses are being missed.

Hope some of this helps. It is indeed very troublesome when you inherit an installed base of equipment that is failing, with so little information on the basic internals. Reverse engineering is challenging, to be sure.

3
bjt transistor circuit - finding the resistances
0
current amplification of a circuit containing a transistor
0
Can you find an analytic expression for the (beta)hfe of a BJT?
0
Maximum voltage gain
3
Relationship between base-emitter voltage, base current and collector current
5
BJT Voltage Divider Bias Circuit problem
5
How to derive the precise gain of an NPN common emitter amplifier without emitter degeneration?
0
Transistor circuit driving me insane
0
Finding current through an LED in an amplifier using a BJT