I'm working on a project that involves about 200 LEDs and about 120 Switches. I'd like to use several MCP23S18 DIP chips across 2-3 buses to control everything. I'm a CS guy and just want to make sure I've got a decent idea of how this is supposed to come together.

Some general fact checking and advice on better ways to do this are all appreciated, I'm very new at this (for the record, this is not for class, just fun).

2) According to the MCP23S18 datasheet (pg 33) the max Vin current draw is 125ma, and the max Vout is 400ma. This means I can safely power 6 pairs of LEDs with an approximate 4.4v chip input right? This means I should be able to use the remaining 11 pins an inputs as long as they are in the open drain configuration, thus avoiding significant draws right? Will it be safe to run all LEDs and have all switches open at the same time (assuming ample power supply)? What is the difference between "current sunk" and "clamp current"?

3) Does anyone have any ideas for a better alternative way to drive multiple leds? I know for some areas of the project that have groups of LEDs it will probably be easier to make a few cheap drivers so I can use all 16 pins as LED control. I've also considered using shift registers for this because I've found some with a 500ma Vin max, I could drive several easily this way. Perhaps a combination of the two, controlling the SR via an IO expander? 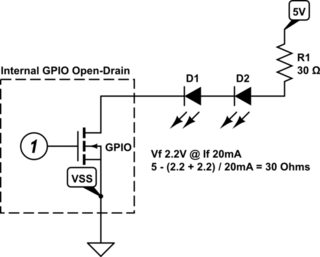 These chips are rated to drive up to 25 mA per pin (times 16 pins = 400 mA max output current, as you mentioned), so they'll be able to pull 20 mA of current through your LED(s) without any problems. You'll be able to use all 16 channels simultaneously, as well.

I would ignore that 125 mA figure for maximum Vdd input current; it honestly makes no sense; since the chip has open-drain outputs, no appreciable current will flow into VDD (other than the rated 1 mA of current the device will pull during normal operation, as reported in the DC characteristics section of the datasheet). I suspect it might be a bad copy-paste job from another Microchip I/O port expander that has push-pull outputs.

...Having said all that, this chip has no intelligent current control; it's not designed to drive constant-current devices such as LEDs (unless you want to drive them at the current-limiting capabilities of the chip -- 25 mA). Because of this, you'll have to use series drop resistors connected to each channel, and any variances in the LEDs' current-voltage relationships will cause different brightness values across the LEDs.

Instead, I would recommend you use a true constant-current LED driver. The TLC59282 from Texas Instruments is similar to the MCP23018 in open-drain functionality, but it is less expensive and has a single IREF pin to set the current for all outputs.

The CAT4016 is a similar ON Semi part. The cheapest option is probably the ST ST16CPC26, which is similar to the other two parts mentioned.

But why stop there? Add in individual PWM brightness control with the infamous TLC5944, or the much more user-friendly (and easy-to-use) ISSI IS31F3216, or the venerable PCA9685, made by NXP. I prefer the NXP and ISSI solutions, as they have an i2C connection with internal PWM clock generation; the TI part requires a more "baby-sitting" from the MCU.

Aren't integrated circuits great? All of these parts are widely-available from your neighborhood electronic component distributor -- good luck!

Not the answer you're looking for? Browse other questions tagged led switches mbed expander or ask your own question.