I am trying to control/fade a couple of High Power LEDs, these are basically 12V 18W LEDs inside a nice package.

I want to use an Arduino and a N-Channel MOSFET to adjust the brightness.

I tested the LEDs by directly driving them from a bench power supply and controlling the brightness by adjusting the voltage (between 0-12V) and it worked just fine.

I then moved on and used the N-Channel MOSFET to control the LEDs by setting an arduino PWM-pin to the Gate-pin. I am not at all an expert but I think that should do it and it indeed works.

Setting the PWM from the Arduino controls the MOSFETs Gate and adjusts the brightness but here is the strange thing that happens. The LEDs are constantly making a whining noise when I lower the PWM. Now the noise is actually not that bad but I am worried that the LEDs will eventually die out because something is certainly not right. 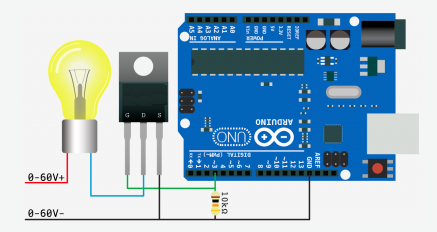 Any idea on what I am doing wrong? Please don't suggest that I should move on to other ways of driving these LEDs as I don't have access to much electronics.

That LED has a constant current source inside of it. That is why it is rated for 9-32 Volts.

It is probably the current limiting circuitry that is making noise.

When you controlled the brightness with the potentiometer and the MOSFet, you could lower the voltage to below the limits that the regulator in the light could handle - it would get dimmer. That would be in the range from 0 to 9Volts. Above 9Volts, the brightness should pretty much remain stable - if the notes on the web site are to be trusted.

Using the PWM signal from the Arduino is turning the power to the light on and off completely. This is often done to dim LEDs. By using a fast pulse rate with very short on time, the LED is only lit for a very short time and appears dimmer - but it is still being driven with its full voltage and current.

I don't know what that unit has for a regulator, but it seems to have at least one inductor or maybe a capacitor. These can whine when driven with a pulsed signal.

The short of it is that it probably won't hurt the LEDs but may destroy the current regulator.

That thing also seems to have been produced by some El Cheapo chinese manufacturer, so no guarantees that it will live long anyway.

According to official documentation of analogWrite() function, which you're most probably using, the frequency of the PWM signals on most arduino pins is 490 Hz. This is well inside the audible range, meaning it may be transformed to sound when applied to certain components (typically inductors).

If the sound doesn't annoy you, it's probably fine to ignore it. Otherwise, you'll have to design some sort of low-pass filter. I'm having a hard time imagining how to design such filter efficiently though. Another solution would be to find LEDs which make less noise.

In about 99.5% of cases, when you hear a PWM or SMPS controlled device "whining" it's actually a design problem of the PWM/SMPS itself, where its switching frequency was allowed to cross into the audible frequency range.

If you get your PWM controller to operate at >100KHz, you should eliminate any noise that you can hear.

For more info on the subject, here's an article where someone copied a few related posts from another SE site.

Not the answer you're looking for? Browse other questions tagged arduino led mosfet npn or ask your own question.

0
Why do I need I large resistor to the GATE of my MOSFET?
1
Arduino PWM control MOSFET
1
Issues with NPN Transistors and RGB LEDs (Common Anode)
1
Using a MOSFET driver
0
Prevent MOSFET input being low when connected to output of powered off device
0
Regulate 12v flow with a mosfet
0
Mosfet current control with PWM