In this parallel RLC circuit, why is there no current flowing through the ideal RLC elements until after the switch is open?

I have a question about the following parallel RLC circuit: 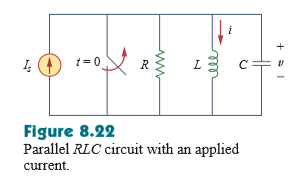 The text accompanying the diagram says: "We want to find i due to a sudden application of a dc current." This confused me, since I thought that there would already be current flowing through the inductor.

According to the current division formula (applied loosely, since I don't know exactly how it would be applied in this circuit), the resistor R would have no current flowing through it. The capacitor would also set up a little voltage it seems like according to

since there would likely be some initial current that would enter it.

All elements are considered to be ideal, and ideal inductors have no resistance.

Let's go back to the initial moment the circuit was turned on, t = - infinity. Right when the current source is activated, from the equation v = L di/dt.

might there be some effective resistance in the form of voltage (since di/dt is not equal to 0) that forces all of the current to go through the short circuit instead? Thus, the ideal inductor never gets to the point where it behaves like a short circuit.

There is no mathematical reason why the current through the inductor should be zero.

An ideal inductor with an ideal (zero resistance and zero inductance) closed switch across it will continue to conduct the same current forever, be that zero or 1000A. The current through the switch would be the inductor current added to Is.

Most real inductors will have a current that quickly drops to zero because they have internal resistance. In this case, you have to assume some initial conditions, so inductor current = 0 is reasonable, unless you're dealing with superconductors, in which case it might be wrong.

Not the answer you're looking for? Browse other questions tagged dc inductor or ask your own question.

3
Behavior of RLC circuit elements at t = 0
9
LR oscillators (no capacitor)
2
how would inductor react if I inject current impulse into parallel LC tank?
1
Current step to LC circuit
1
Real inductor equivalent circuit
1
Why this short circuit doesn't take all of the current?
0
Can Inductor force abrupt current change through another inductor?
0
At what resistance can a real inductor act like an ideal inductor?