How can I remove the noise and how to increase the volume?

Does adding gain and bypass on LM1458 or/and decoupling can remove the noise? but how to add?

In case anyone could help me how to remove noise, i want to add base and treble adjustment but how? 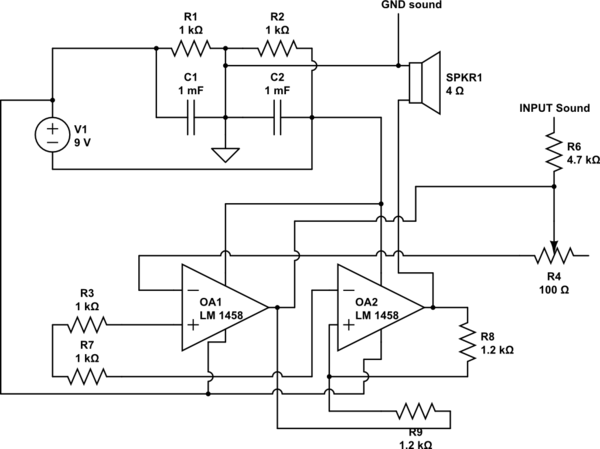 Update: I've made LM386 amplifier with gain and bass boost which is far better than LM1458 amplifier. Thanks for all the comments and suggestions.

If you built the circuit as you've drawn it, then it is a wonder that your circuit does anything at all. Expecting it to work correctly is just too much.

I would suggest you start with clear and correct circuits. Here are two simple circuits that will be much easier to build:

Your circuit is probably not working well because you are trying to drive a speaker which requires maybe 0.5 W with an OpAmp designed for low output currents. To give you 0.5 W across a 4 Ω load, you need an output current of I = sqrt(0.5 W / 4 Ω) = 0.35 A -- too much for a small-signal, general-purpose OpAmp.

Even with low-performance, low-current opamps like the 741 and its derivatives, it is possible to build a somewhat capable design, though. One trick is to boost the output stage by adding external transistors.

It will likely be easier to use a ready-made IC designed for loudspeaker amplification, but for the sake of learning, I'm posting a small experiment I've tried out a while ago.

The trick that can be learned is: What have the designers of ready-made loudspeaker ICs had in mind when they built their designs? What's the difference between an OpAmp and a power amplifier? They share a very similar cicuit symbol, so what's actually going on here?

If you look into commercially available audio gear, you might be surprised how often you find simple, general-purpose OpAmps, even inside of mid- to high-grade equipment.

Some clues and background info about boosting small-signal OpAmps can be found in an application note, originally published by National Semiconductor (now TI), and written by Jim Williams. (His name is not in the application note, but there's evidence ;-) Note that he even has some designs that use vacuum tubes to boost the OpAmps.

Here's a circuit I've tried a while ago, quickly drawn on the back of an envelope: 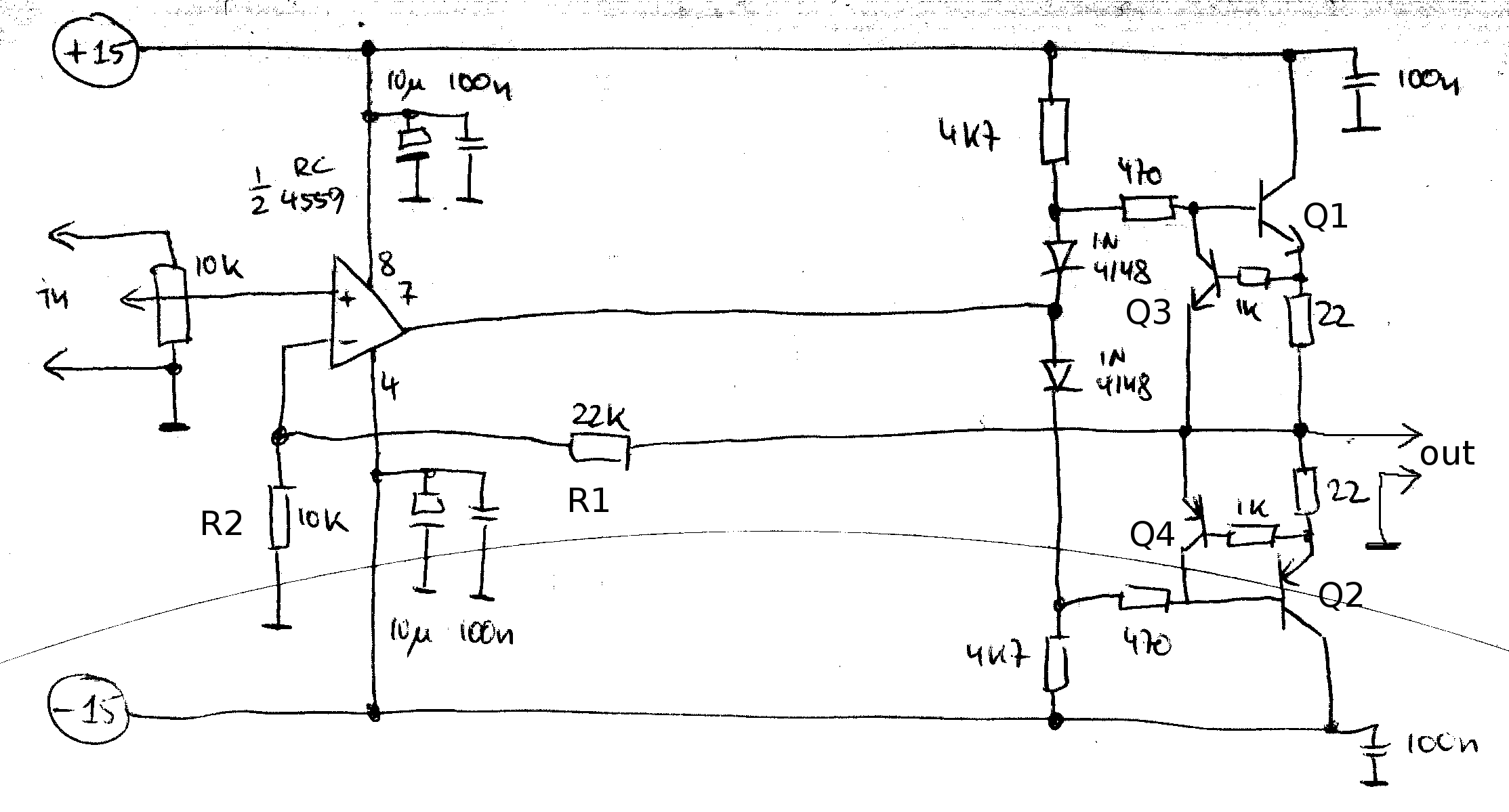 And here's what it does: It takes the OpAmp's output (741, half a 4559, whatvever), puts it through a complementary BJT output stage (Q1, Q2), and uses the BJTs' output signal as the input for its feedback, thereby eliminating any non-linearities and unknown properties (amplification = ?, linearity = ?) of the discrete output stage. Also, two additional transistors Q3 and Q4 are connected across the 22 Ω output resistors, provide an over-current protection that kicks in around Iout = 0.7 V / 22 Ω = 32 mA and protects the output transistors Q1 and Q2.

Output transistors are BC548/BC558. This design works well as a headphone amplifier. For loudspeakers, use bigger transistors for larger output currents and adjust the current sense resistors accordingly.

Note how the general idea looks very much like a basic, non-inverting OpAmp configuration, except for the additional BJT stage between the OpAmp's output pin and the circuit's output ("out") connected to the feedback resistor (22k).

The voltage of any signal taken from the input potentiometer (at the OpAmp's non-inverting input) will get amplified by a factor of A = 1 + R1 / R2. Q1 and Q2 just help to deliver more current while the OpAmp tries to maintain the desired voltage - and this is A Jolly Good ThingTM, quoting Mike Engelhardt, because for a speaker amp, you need both voltage and current, because power = voltage * current.

You may want to ask now just how much current the output stage is going to give you. Answer: The amp acts like a voltage source, and it will try to give you as much current as it can, just as long as Q3 or Q4 don't start to limit the show. Hence, the current is determined by the load connected across "out" and can be calculated once you know the load resistance RL: Iout = Uout / RL. Approximate a speaker's impedance using ZL = RL.

Trying to get amplifier circuits to work right is a very complex thing. It helps if you look into the concept of filters that pass the signal you want and block the parts you dont want. The fact your circuit has sound output is great. There are good suggestions here, the circuit drawn on the envelope looks good, but there is no output connector drawn; Am assuming its in the left center between the 22ohm resistors in series?

Picking the capacitor values even for the LM386 has to be done carefully, and you need an oscilloscope to see the signals in the stages of your design.

Add Bass and Treble: you must filter the input, or set the level to a known value then put it across filtering to pass or block frequency ranges, after the filtered input, then your bass/treble circuit, then you amplify, but make sure your amplifier will not pass anything above the audio range.

you could use some known Audio power amp circuit to drive the speaker, but make it 3 sections: normalize your input then apply the bass/treble, then amplify

Not the answer you're looking for? Browse other questions tagged operational-amplifier noise or ask your own question.

2
How to decrease distortion/noise of LM386 amplifier at max gain and volume?

12
How to make a clean amplified microphone analog to digital conversion?
5
dynamic gain control for active noise cancellation circuit
2
How to decrease distortion/noise of LM386 amplifier at max gain and volume?
1
How to reduce/remove piezo pickup hiss
4
where to add gain and volume controls to LM386 guitar amp circuit?
0
Remove DC offset from op-amp output to allow increase in gain
1
Reducing noise in this audio amplifier
0
Cascading inverting op amp for increased gain and low noise on piezo contact microphone
0
XS-3868 module stops noise for 5 seconds, how to make it longer
1
How to reduce audio noise from Bluetooth module