What electrical processes are behind RECCO system?

According to Wikipedia, RECCO system for finding people buried under snow uses reflectors each of which contains a pair of foil aerials, joined by a diode. The text further says the size of the aerials makes the unit a tuned circuit resonating at one specific frequency.

AFAIK any piece of metal will reflect electromagnetic waves and will resonate when irradiated with waves of length matching the piece size.

How does connecting two pieces of metal through a diode form a resonating circuit? What is the diode doing in that circuit?

Here is an excellent paper on Frequency Multipliers.
The whole paper is relevant to some extent but the section on diode multipliers from bottom of page 5 (unnumbered) to page 9 especially applies.

A formally optimised diode multiplier may have DC bias applied and tuned input and output structures. Most of this apart from the DC bias may be present in the RECCO device - even though the description given sounds somewhat simpler - all this is just a matter of properly shaped and orientated foil patterns - and possibly the inclusio of one resistor.

Note that the single diode arrangement shown radiates on the second harmonic while dual diode version radiates on 3rd and higher odd harmonics.

From the above paper.

The above Wikipedia RECCO writeup says:

It has (very reasonably ) been asked

The main requirement is to get a voltage that drives the diode to & fro across it's non linear region to promote harmonic generation, and a good enough tuned circuit is going to do that.

The required range is very small compared to what is usually required for radio communications and truly tiny signal strengths are OK.
Consider that signal strength decreases with the square of the distance or transmit power requirement increases with the square of the distance.
Imagine a transceiver with a 5 km lime of sight operating distance.
A 1 Watt transmit power will probably handle that OK with a typical portable antenna.
If the RECCO equipment is required to work at say 10 metres then
the distance ratio is 5000m : 10m = 500:1.
The square of the distances = 500^2 = 250,000:1.
If the transceiver works with 1 Watt, a similar signal strength can be obtained from about 1 Watt/ 250000 = 4 micro-Watts = very small indeed. (An AA Alkaline battery would, apart from shelf life issues, provide 4 uW of power continuously for about 100 years.)

Given that they say that the RECCO transmitter has a highly directional antenna - as opposed to the the quarter or 5/8 wavelength "rubber ducky" antenna on a typical handheld transceiver which has not much over unity gain, there is extra gain both to concentrate the transmit signal and the receive signal. The proverbial "smell of an oily rag" of signal will be enough for a modern receiver.

As a "data point" the APN1 radio altimeter produced just after WW2 used a push pull acorn tube transmitter and dual thermionic diodes in the receiver. This altimeter detected radio ground reflections over a return path length of up to about 6 km (10,000 feet altitude) using a passive diode detector. Frequency of operation was simila to that of RECCO.

As noted - a diode plus almost any AC is enough. The foil pieces are arranged to form a resonant circuit such that as one end assumes one polarity the other is of opposite polarity. The diode sees large voltages across it and is operated in its non linear region thus producing harmonics. Consider a typical half wave dipole antenna - TV receiver or amateur aerial etc. The whole antenna establishes an oscillating signal along the receiver element. The feedline breaks this arrangement at the midpoint and transfers the signal to the receiver.
In this case "the receiver" is the diode and the feedline is nonexistant. 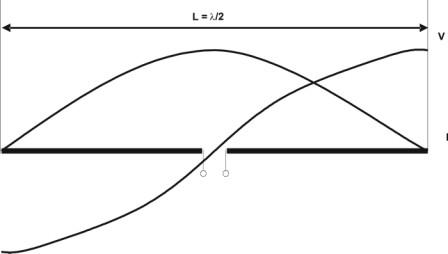 Bit late but anyway,The two triangles of foil inside the Recco reflector constitutes a dipole antenna.

This dipole is a resonant circuit in itself, no LC network or other circuits are needed. The diode doubles the frequency (along with other weaker harmonics)

The two parallel LC networks you see in the illustration are notch filters, they pass everything but the center frequency to ground and so gets rid of it leaving only the wanted frequency behind for the diode to double, in exactly the same way it's used in a radio to let you hear only one station at a time.

They have nothing to do with getting the circuit to resonate.

This is not needed for the Recco as it is a very simple and broadband little gizmo. Any frequency that's in the ballpark is doubled and regurgitated.

Take a look at the LC network. The inductor will pass DC without any problem while the capacitor will look like an open circuit (which is exactly what it is at low fq)

When we reach high frequency AC the inductor will have a great big inductance and stop everything while the capacitor will look like an open highway.

Somewhere on the middle both impedances will be equal and the AC will have no path of lower resistance to go but through the diode and we will have the filter's frequency of greatest attenuation.

The same effect could have been had by placing a LC series network in series with the diode but that will attenuate the signal greatly, so it's better to bleed off unwanted fqs and leaving the signal path as clear as possible

Not the answer you're looking for? Browse other questions tagged radio antenna or ask your own question.

4
What is the bandwidth of an antenna ? and what happens when a narrow bandwidth is used?
1
Using Titanium as antenna in implantable tracking system
1
What are the units in which a radio signal's strength is measured?
0
What sort of antenna is this?
2
What is the End of Train Device RF Path?
1
How exactly a ground plane helps inproving antenna gain? What is the logic behind it?
2
What are the differences between regular and disc Yagi-Uda antennas?