I am trying to repair the power supply in an LCD monitor. It is a fairly basic design around an OB2268AP in the 20-30 Watt range. The power supply had failed spectacularly because the main MOSFET short-circuited, vaporizing one pin on the regulator IC, burning 2 resistors to a crisp, damaging another plus some collateral damage.

Here's the part of the circuit after filtering and rectifying mains voltage, so there's some 300V DC between U+ and U-. 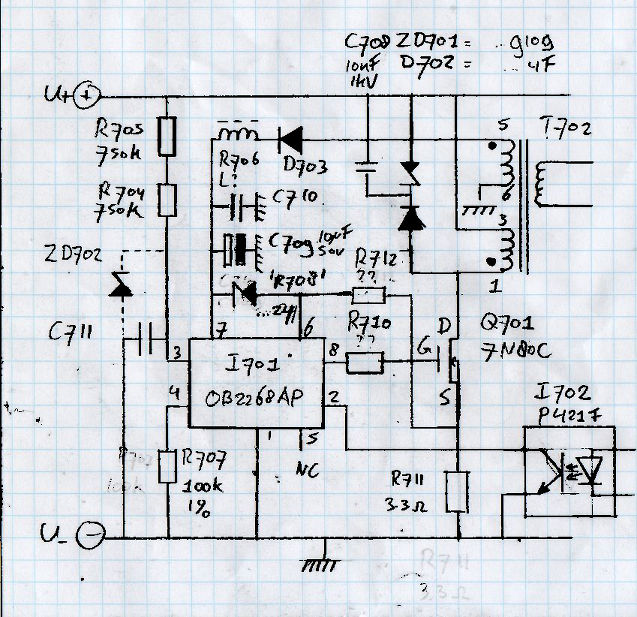 There are a few oddities on the PCB:

R710 and R712 were burned to a crisp so I can't make out the original values, and I need some advice on the values. The reference design for the OB2268 does not mention R710 but I suspect it's a low ohm resistor to have some 'protection' against the gate capacity of Q701. I guess something like 2.2Ω, 4.7Ω maybe? Any higher and the rise and fall times for the gate will suffer, I guess.

Update 2: I repaired it with the following components:

I hooked up an oscilloscoop to the gate of Q701 and the rising edge is a bit curved and there's a tiny bit of oscillation/overshoot but otherwise it seems okay; the descending edge is straight and sharp.

Note on the IRFB9N60A: in contrast to the original 7N80C this transistor not an isolated package.

A few ohms for R710 seems about right. The gate drive is a push-pull: 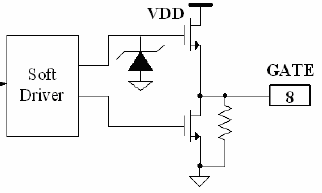 Even though the datasheet shows a relatively slow turn on and turn off time, there could still be a bit of gate oscillation without a resistor here. I would suggest (as you note) something in the order of 2.7 to 10 ohms as a starter; there is indeed a trade-off between gate slew and gate ringing.

R712 is a series resistor into the current sense input (current limiting is set to engage at 260mA according to the datasheet). I think R712 is there to provide a helper filter so the leading edge blanking can operate properly; it is not that uncommon for leading edge blanking to get 'confused', depending on application specifics. I would assume that the first pass of the design had some anomalies around this area (there is an internal chopper circuit). 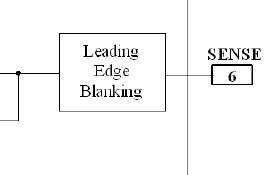 It is difficult to assess the specifics of this resistor, but something around 33 ohms might be a good starting point, although I have not done a full analysis, so treat this recommendation with caution; it is where I would start for a leading edge blank filter.

Excellent job with the schematic.

The part has a fixed leading edge blanking time, derived from the internal oscillator apparently, as the resistor used to set it is a parameter on the datasheet line:

A fixed blanking time could conceivably be an issue depending on the specifics of the design , so it quite natural to see a resistor here that can form a small filter (because the blanking is too short in a given design) in conjunction with track and pin capacitance (and possibly internals that we have no knowledge of).

From that perspective, it is quite feasible that the filter resistor is several hundred ohms to even a few k ohms, as noted by Nick.

I think that the initial guess value for R712 should be higher, on the order of 1kΩ.
This thought comes from a flyback converter which I have designed previously. It also had a current-mode controller (different model of controller, though). 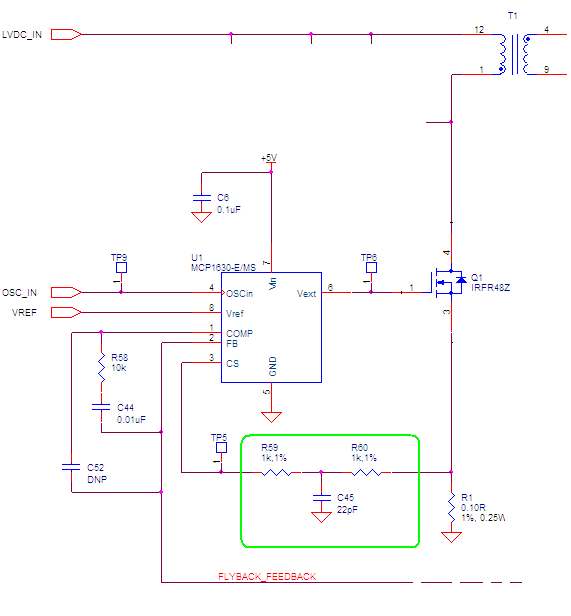 My guess at R712 was 100K (just like R707). This would give a gain of 1. Then I saw the data sheet information presented by Peter Smith, and noticed that the RI is 100k. Could this just be a coincidence?

Not the answer you're looking for? Browse other questions tagged switch-mode-power-supply repair or ask your own question.