I recently bought a lot of cheap CR2032 batteries from aliexpress. Since there is no manufacturer stated on the package or the batteries, I would like to know if these batteries really have 220 mAh or are they as fake as they are cheap. I would like to use them for a project with the bluetooth SoC nRF51822 QFAA, which draws 3 uA in sleep and few mA when radio is active.

I made a constant current load, to draw the constant current over time and to calculate the total capacity, but I was unable to determine the correct capacity because the voltage on the battery went down to 0.1 V and current from the battery to 10 mA. I used this schematic from instructables.

I changed the resistor to 10 ohm (around 11) and the voltage on the pot to 0.5 V (not exactlly 0.5V). With these calculations, I should have gotten 45 to 50 mA constant current, but when i measured it, it was 37 mA (good enough). But after a while (no more that 30 minutes) the current dropped to 10 mA and voltage to 0.1 V. After disconnecting the battery the voltage slowly raised to about 3 V. The same happened with the Chinese batteries and with some of the known battery brands.

Is there any other way (or a better schematic) to test CR2032 battery capacity, without buying some kind of battery measuring equipment??

Why did the voltage drop? Was it because of the "high" current I was draining?

CR2032 batteries are simply not intended for high current. They are lithium/MNO2 chemistry, which makes them lithium, not lithium-ion. For the behavior of a reputable source, see here, for instance where pulling a pulsed load of 23 mA produced about 1/2 volt drop in the output voltage. With that said, your nominal 37 mA isn't that much greater, so I'd expect something on the order of 5 hours duration for your test.

You need to test at much lower currents, like 1 mA max, and take your time. Your nominal 2200 mA-hr would last about 9 days at 1 mA, but even this is stressing the battery. From the web page, a 100 ohm load (about 3 mA) will pull down the battery voltage by half a volt in a few seconds.

The problem with all of these answers is that they don't take one important fact about coin cells (all cells & batteries really) into account. That is that the capacity is nominal and wholly dependent on the load. A CR2032 is only 220 mAh when the load is small, 10k ohms or smaller. Maxwell's datasheet shows that a 300 ohm load, for a fraction of a second, every 5 seconds, will drop the capacity to 185 mAh, 18% decrease in capacity. Any large continuous load will decrease it more.

The only way to test is by following the same test conditions as the manufacturer or reliable source uses. In this case, 10~15kΩ, down to 2 Volts, which should be a few hundred hours for a nominal 220 mAh.

AA Alkaline Primary cells, or Li-Po secondary cells also have this, but at much higher loads and capacities, so its not as noticeable. Coin Cells like the CR2032, due to their much lower capacity and high ESR, must be loaded carefully to reach expected capacity goals.

As it happens, I had the same question, and since I also happened to buy an arduino-clone in the same order, I put them both to work to measure the battery.

Because I wanted a fair comparison, I searched in the datasheet from "reputable manufacturers" until I found one that had a discharge curve for a constant resistance, and one that did not take 500 hours. Eventually I found the datasheet for a SONY MicroBattery of the same size (CR1220 in my case). It has a discharge curve for a constant 10 kΩ resistance, which will discharge the battery in roughly 150 hours. I can wait for that. 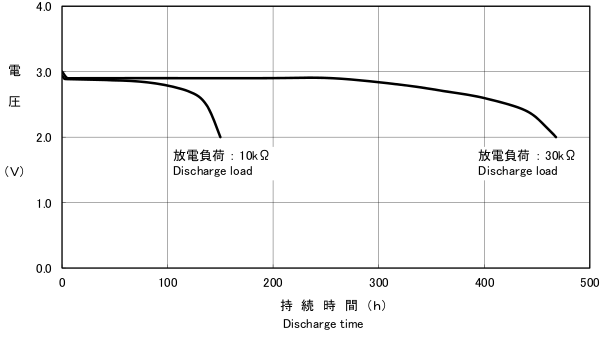 Then I needed to measure this accurately without excessive loading and keeping the parameters stable over time. I had a bunch of good old OP07 low-drift operational amplifiers at home, which I used for two things:

I verified that the readings I got from the ADC into the log matched the voltage measured with external voltage meters.

After making sure all of this worked well and produced lots of nice data, I powered it up, let it heat up for a while, then connected a fresh battery and waited...

... After about 200 hours the voltage was practically zero and I had 100 MB of text, which I filtered down, and then superimposed the data from the SONY datashet, the result is this graph: 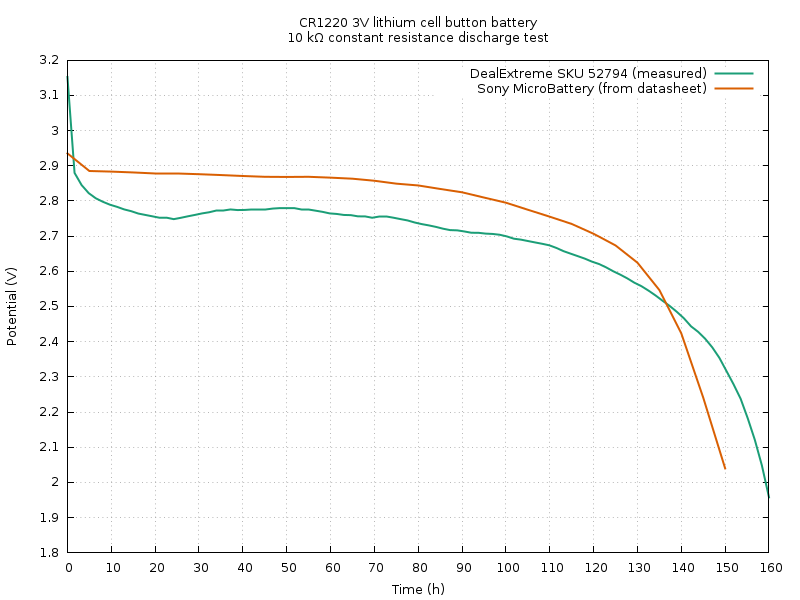 The cheap cell outlasted the expensive cell. Note carefully that my final graph is cut at the bottom, so the difference in voltage looks higher than it is.

Since chemistry isn't my thing, I can not explain the result, but as you can see, the steady-state voltage is roughly 0.1 volt lower than from the SONY datasheet, resulting in a slightly lower current drawn from the cell. This probably accounts for the longer life of the cell.

For this type of battery the capacity is usually rated using a resistor in the 10k range.

The internal resistance is in the range of a few tens of ohm, therefore you experience a large voltage drop if the load resistor is too low.

Lithium coin cells are well known to have significant internal resistance, for one thing. This is why you can power most LEDs directly off a coin cell with no resistor and usually get away with it.

Discharging faster than the 20 hour rate will give you bogus (and low) results on almost any type of battery, for another.

Given the usual type of service (low current) that coin cells are put to, the 100 hour rate might be more appropriate, or 2.2 mA - If what you are using them for needs more current, you might want a different kind of battery altogether.

Note that the rated capacity (240 mAh) from the Energizer datasheet linked by @WhatRoughBeast is rated at 0.19 mA (well, at 15K ohm load, and the current given at 2.9 V as the thing goes from over 3 down to 2 V.)

CR2032 cells from aliexpress do not operate as long as retail blister pack batteries in my car fob. In this application, the nominal current draw is 4.4uA, but the pulse current when the button is pressed goes up to 6.7mA briefly.

Even with new batteries, the aliexpress sourced battery voltage drops much more during the current pulse because their internal resistance starts about a factor of 2 higher when new.

Not the answer you're looking for? Browse other questions tagged batteries measurement constant-current cell-battery capacity or ask your own question.

3
Is there an instrument that can measure the capacity of lead acid batteries
1
Using/Substituting a Coin Cell Battery
1
Li-Ion pulse discharge to improve output characteristics
1
Lithium Ion Battery Capacity: Discharge Analysis
0
Any side effects when substituting bigger capacity battery in place of smaller capacity?
2
How to measure Alkaline battery lifetime/capacity in practice LED circuit?
1
How to calculate CR2032 battery life with LED
0
Finding the capacity of a battery with its discharge curve
1
Lithium ion battery CV mode