I saw a schematic for building a NOT gate, it worked, but there's something I don't understand. 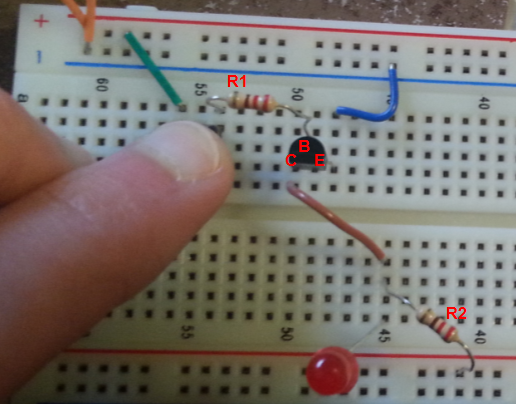 If I push the button, the LED at the bottom gets turned off, even though there is a path between Resistor 2, the LED and ground (which is a bit strange to me).

I played around and realized that, if I put a resistor between the emitter terminal and the ground terminal, the NOT gate stops working, so I came to the conclusion that the path between Resistor 2, Collector, Emitter and ground, has less total resistance than if it had to go from Resistor 2 to the LED and ground.

I read that the transistor causes a drop of 0.7V, just like the LED, so why wouldn't the led shine even just a little ?

If you add an emitter resistor, the current running through it causes a voltage drop, so the emitter (and collector as well) are on a higher voltage. 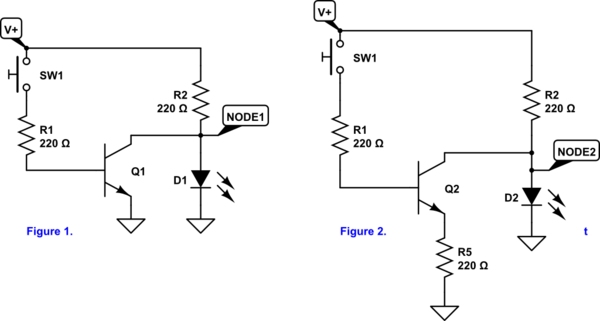 Schematics are so much better for understanding what's going on. If I understand your photo correctly Figure 1 is working and Figure 2 is not.

Not the answer you're looking for? Browse other questions tagged resistor-transistor-logic not-gate or ask your own question.

9
How to combine multiple transistor logic gates without gigantic voltage-drop?
0
Transistor Based NOT Gate Not Working?
2
How Does This NOT Gate Work?
0
Not Gate switching
1
Maximum resistor values for transistor inverter (NOT gate)
1
Understanding Resistor Values in TTL NOT Gate
0
CMOS NOT gate output