Why are digital oscilloscopes still so expensive?

I'm a beginner in hobby electronics and I am wondering why digital oscilloscopes are still so expensive?

In times of cheap GHz CPUs, USB 3, ADSL modems, DVB-S receivers, blu-ray players which all of them have remarkable clock frequencies/sampling rates it makes me wonder why a digital oscilloscopes which is capable sampling signals of a bandwidth of 10MHz are still very expensive, 100MHz is already high-end.

How can this be explained?
What differs the ADC from an digital oscilloscopes from one of the devices mentioned above?

I'd firstly agree with other posters as to economics of scale. Consumer devices are produced in the millions whereas such a market does not exist for digital oscilloscopes.

Secondly, oscilloscopes are precision devices. They need to undergo rigorous quality control to ensure they live up to expected standards. This further increases costs.

As for bandwidth. The Nyquist criterion states that the sampling rate should be at least twice the frequency you want to measure. But even at twice the rate, it is terrible at best. Consider the following pictures: 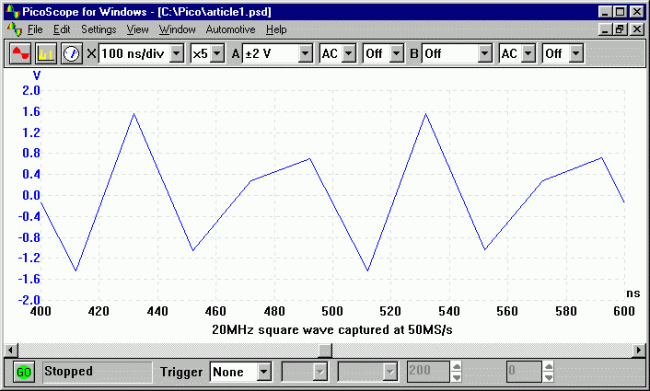 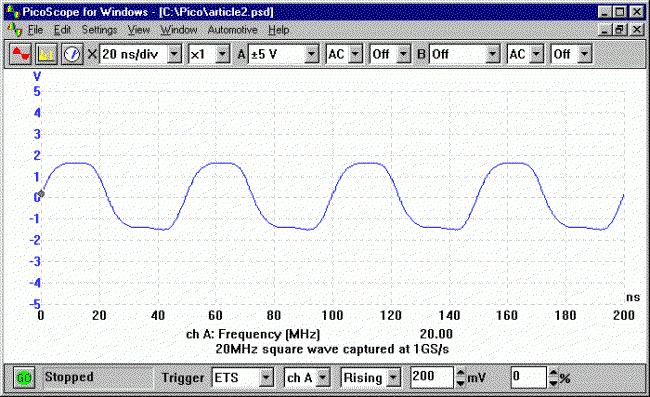 The graph captions tell the story. You need to exceed the specified bandwidth by a great amount in order to gain an accurate representation of the square wave input signal (high frequency harmonics). And greater bandwidth = greater cost.

In the end the precision, bandwidth and limited production quantities that drive up prices.

Economy of scale -- the other items you mentioned are consumer devices, manufactured in the millions. Oscilloscopes will be manufactured in the thousands (or less), which makes a huge difference in amortized R&D, BOM (bill of material) and assembly costs.

Lower production volumes are a major cause and secondly, you're buying test equipment which is something special. If you only look at the teardown of a cheap DSO like a Rigol DS1052 you will see what's required just to make a low-entry scope. They have 5 dual ADC's (overclocked, so that already reduces pricing!). If those ADC's were $4 each (a random guess, very large quantities), that's already $20 on ADC's. Digital circuitry to drive and read the ADC's are probably very expensive too (FPGA, CLPD, DSP proccesors aren't cheap) I guess the analog frontend adds to like 25$ easily too. Then there is PCB costs, manufacturing, the case, color screen, front-panel board, power supply, boxing, shipping and paying engineers to design/support it. I can't see how they would sell that product for even less. I think that the DS1052E is about 300 euro's here in Europe.

If you look at the teardown of a much more expensive DSO like Agilent 3000X, I think a large amount of the price goes into the production and design of those ASIC chips. ASIC chips are custom designed digital IC's. It's like an FPGA, but with more speed and 'space'. Imagine you design a chip completely acustomed to your product. I am sure that will cost them a lot of money to get off the ground.

Coming back to the 'versus PC' performance: those ASICs process 1M waveforms per second. To put that into perspective, if you have a processor running at 3GHz it would only have 3000 clock ticks between each trigger point to process the waveform. How many points do you think is in a waveforms memory? Well it may be 4K. That would mean the proccesor needs to process 4/3 of a sample in 1 clocktick. No way! Furthermore, consumer PC's and their processing speed are built around and operating system, PCI-e busses, and very complex high-end stuff. Older high-end scopes were using PC boards for post-analysis. They aren't fast enough to process, display and analyse waveforms at the same time.

Also note that this scope has a maximum (real-time) sampling speed (so it's no tricked with software) at 4GSa/S. If you include features like serial protocol triggering (i.e. you send the character 'A' over a serial bus it will trigger the scope), you just need custom hardware to do it. Of course, the displayed scope costs $12K (gets you a decent car now adays too!) but apparently engineers require these tools, and this is what it takes to make it happen.

I bought a Rigol DS1052E oscilloscope, on the basis of Dave Jones eevblog #37 tear down, in May this year for £257.76 + £31.20 postage, tracked, (well worth it to watch it approach across the world, took two weeks) from BestOfferBuy. I am delighted with it, and I see it is now priced at about £215, exc postage. There is another version with a 16 channel digital analyser included.

I have no connection with Rigol or BestOfferbuy except as a delighted customer.

This press release allegedly describes how they can produce it so cheaply without sacrificing quality:

The late Speaker of the U.S. House of Representatives Tip O’Neill once said, "All politics is local." Rigol Technologies, a Beijing instrument maker, may have written that statement’s corollary: "All business is local."

Founded in July 1998, the company launched its first product -- a virtual oscilloscope designed to work with a PC -- in less than a year. Its success led the company to develop complete, standalone oscilloscopes as well as to branch into other instrument-related areas. In 2006, the company introduced the DS 1000C digital storage oscilloscope, which won wide acclaim in China.

The scope was a breakthrough for Rigol, providing a small form factor, deep memory, wide bandwidth options, and low price. And its success also brought a common form of flattery: imitation. By 2007, Rigol was the No. 2 DSO manufacturer in China, producing over 40,000 DSOs a year. The same year, copies of the scope from a few Chinese manufacturers also began to appear. In China, where intellectual-property protection is still maturing, the practice of "knocking off" someone else’s design was common. (Rigol has since successfully sued the copyists.)

The rapid copying of Rigol’s products made the company examine its business strategy. Getting out of the low-end market was not really possible, given the importance of the education market to Rigol’s current and future business plans. The other possibility was to find a technical way to distance itself from the copyists. Wang Yue, the founder and president of Rigol, as well as the key system architect for most of the company’s major instrumentation platforms, decided to use Rigol’s R&D resources, buying power, and low manufacturing costs to create a product that even those who copied it couldn’t undersell.

Because Rigol uses off-the-shelf components, it is the world’s largest purchaser of commercial ADCs and other DSO parts. So it used this purchasing power to reduce parts costs. Believing it could double volume again as it pushed price down, the R&D team set out to create a fast turnaround project with a one-year product design cycle. The manufacturing team created a way to increase volume at little extra cost and at an overall lower average cost.

The result was the DS 1000E product group. The line not only is succeeding in its home market, but in Europe and the Americas as well.

I don't know too much about the politics and business (low production volume and precision requirements seem like reasonable explanations), but I know that analog to digital converter chips can get very pricey. On Digikey, they can run into the thousands, and the most expensive chip is $14,000 for one single channel ADC!

The Wikipedia article on ADCs explains how these chips get so expensive:

Direct conversion is very fast, capable of gigahertz sampling rates, but usually has only 8 bits of resolution or fewer, since the number of comparators needed, \$2^N - 1\$, doubles with each additional bit, requiring a large, expensive circuit.

Cheap chips rely on converting a voltage measurement to a time measurement, like charging a capacitor and measuring the time. However this limits the speed at which the chip can run. The fastest ones run in parallel using one voltage comparison circuit for each voltage level. This means a 10-bit ADC needs \$2^{10}=1024\$ comparators per input, plus circuitry to convert each to a binary number. This all means the chips need large areas of silicon, which drives up cost incredibly rapidly (ask Intel). I'm sure the precision requirement also ramps up cost, and maybe also issues of input capacitance when the signal goes to 1000 internal circuits.

The faster (GSa/s) chips tend to be this kind of high performance ADCs. So for a gigasample 4-channel oscilloscope, these could easily add $4,000 to the price tag.

Compared to analog scopes, digital scopes aren't expensive at all. I don't think it's the technology so much as the low-volume market, like tcrosley just said. Even if you built the scope with the most mass produced parts available, there would still be the non-recurring engineering (NRE) cost in designing the thing, and it's basically the NRE that you're paying for.

Not the answer you're looking for? Browse other questions tagged adc oscilloscope sampling cost or ask your own question.

3
What makes an active probe so expensive?