with his reasoning that \$P\$ must always be positive with the exception when the resistance is negative, so I should not have the absolute value there.

I have found it on wikipedia.

Is this formula wrong? If yes, how can it be written correctly in this form. If no, can you forward me to some more reading on this? Many thanks.

I would say that the most general formula is:

S is the module of \$\underline{S}\$ and it is always positive (it is simply the voltage amplitude times the current amplitude).

\$\theta\$ is the angle between voltage and current. If this angle is bigger than 90º it means that the load is in reality providing active power to the source and not the other way around.

Therefore P can be positive or negative.

The real power (P) should not be an absolute value. Let's look at the math. Power factor is defined as the ratio of real power (P) to apparent power (S). But S is a complex number, so a simple ratio is meaningless. We need to use the magnitude of S:

If we only have S, we can use it to get a formula for P. P is the real part of S:

This is a bit confusing because power triangles are almost always drawn with positive real power, which makes it look like the angle is between P and S. But it's not -- the angle is a property of the complex number S alone. 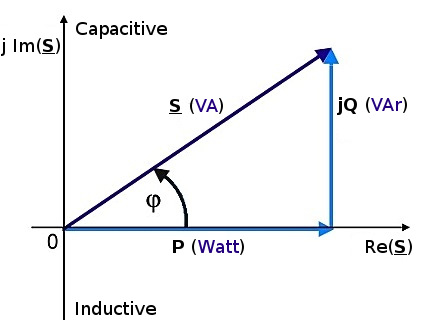 So a negative power factor tells you that the load is supplying power to the generator. If you don't care about that, you can take the absolute value of the cosine to keep the power factor positive:

UPDATE: The Wikipedia article is incorrect. It contradicts itself:

The formula contains the absolute value of P, but then immediately says the power factor can be negative.

Not the answer you're looking for? Browse other questions tagged power power-factor-correction or ask your own question.

1
Complex power using phasors derivation
2
The relation between light electric field and light power (optical modulation)
4
Power factor correction in a simple phasor circuit
3
How to measure power factor cos phi with an Arduino?
0
Synchronising Power & Synchronising Coefficient
0
Do resistors consume reactive power?
0
Why is phase of current assumed to be 0 when deriving formula for instantaneous power in an AC circuit
1
Why is apparent power more important\relevant than maximum instantaneous power?