I am trying to send something from an atmega to my pc.

Firstly I tried to write the code in C and used this code and then this one and I got the same result: '�' or random characters (in minicom or screen)

Then I gave up the C and uploaded a simple Arduino program:

(when running arduino I put a 16MHz crystal. in other cases I used a 20Mhz one. Also setting F_CPU accordingly in the code.)

In all the cases the R(receive) LED of the pl2303 is blinking at the right moments (depending on the delay set in code).

I also shorted RX and TX of pl2303 and tried to send data across it and I receive back what I send.

I hope I was specific enough and coherent.

(normally I try to find myself answers and solutions, but now I'm lost)

given that you're seeing 0 zeros and a 1 it's probably set 8 times too fast, so try 1200 baud in cutecom and look for a possible cause for the baud rate divider in the arduino to be set 8 times too high.

As mentioned above, you have CKDIV8 fuse still programmed in fuses. 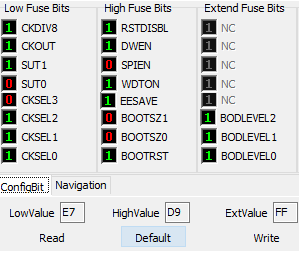 Not the answer you're looking for? Browse other questions tagged avr communication embedded uart terminal or ask your own question.