What is this high power switch symbol?

I am a medical physicist, and I program software for MRI scanners as well as develop electronic devices that interact with them. Because of the way MRI works, it is necessary to use very large power amplifiers (~300 kVA) to drive large currents through low resistance coils of wire, producing a precisely controlled magnetic field that varies linearly in space (and is in addition to that produced by the main, static magnetic field). These devices are called "gradient sets", and there are three of them, each with an associated power amplifier. The load is almost entirely reactive.

I recently had cause to look at the wiring of one of these amplifiers into the wall. Its isolator is a large three phase supply mechanical switch, a photo of part of which is below. There are two electrical symbols on the box for a switch -- one with a square on it and a 160 A rating, and one without.

What do these symbols mean? Not being an electrical engineer, I've never seen them before, and some quick googling hasn't shown anything up. Is one stating that there is a 160 A RMS fuse present (at three phase 415 V), but that the instantaneous current might be up to 315 A? 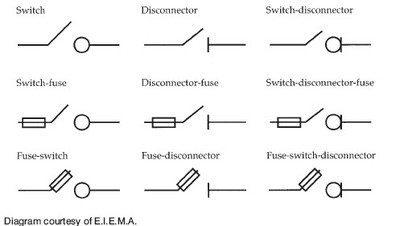 4
How to control power to a water heater
2
Isolating high voltage/high power electronics from low power electronics
2
High step up DC-DC converter switch mode power supply
3
Fuse symbol on toroidal transformer
1
What does this symbol on a contactor represent?
1
Got 2 gang light switch, common load, design circuit to know ON/OFF state of switches on each wire
0
High potential between ground and neutral wires in wall outlet
0
What does the symbol and rating mean on this power plug?