I am trying to implement carry chain with Cyclone IV FPGA. I will use carry chain as delay line so here is quick explanation of my program: When input signal "cin" goes high, signal starts to propagate through chain and in moment when STOP occurs, propagation is sampled by registers. To do so, all it takes is to set all the bits of the first operand (input a) to ‘1’ and the bits of the second operand to ‘0’ (input b). Code which works fine for me is :

With such structure of code i get exactly what i need; carry chain with fast paths as is show in next picture. 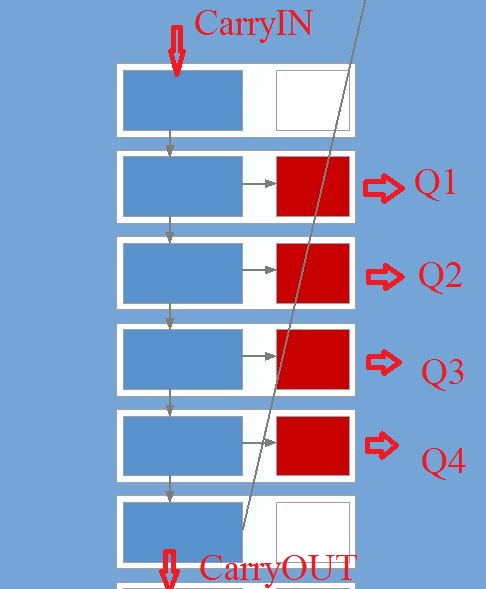 Problem is that operands "a" and "b" need to be declared somehow else then input signals. When I try to declare them fore example as SIGNAL or CONSTANT carry line gets deformation (fast paths are not used or cells are placed at strange way).

You need to convince the synthesizer that a and b can change at any time — if it believes that they are constants, it will optimize them away.

It doesn't matter how they can change. One simple way would be to have a shift register whose serial input comes from an external pin, and whose outputs drive a and b.

You can ground the pin externally, and then put logic (e.g., XOR gates) between the shift register and the adder to produce the bit patterns you actually want.

Not the answer you're looking for? Browse other questions tagged vhdl intel-fpga quartus or ask your own question.

-2
Design of carry chain — Problems with clock's in design