How the Depletion Region of PN Junction changes under Bias

There are several other questions on PN Junctions out there, but I don't think this one has been asked specifically.

I am having a severe misunderstanding of how the depletion region width varies under bias. I know that what I am thinking is incorrect somehow, but I am unsure wear.

I will reference this picture from a textbook I like: 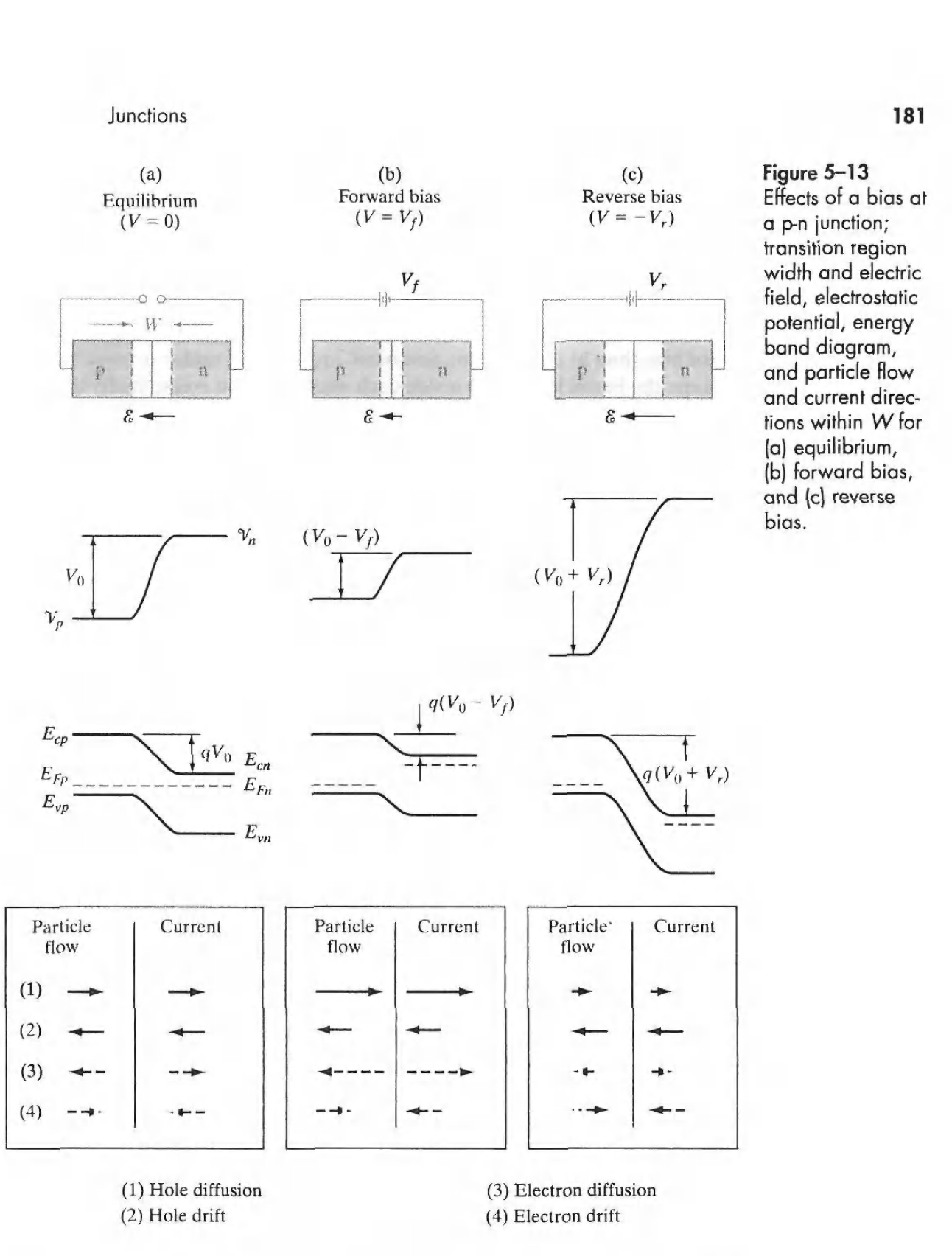 The depletion region is created due to a balance of diffusion and drift current. Diffusion pressure causes holes to travel from the P-side and electrons to travel to the N-side and combine with one another around the junction. This combination leaves behind positive charge on the N-side and negative charge on the P-side. This charge creates an electric field that opposes the diffusion current with a drift current. The width of the depletion region is determined by whatever amount of charge transfer balances the drift and diffusion pressures.

Now, if you have a higher concentration of dopants, you end up with more diffusion pressure which means the electric field must be bigger in order to oppose it, meaning that the depletion/space charge region must be wider. However, what I just said is incorrect, but i don't understand where my reasoning is wrong.

Now again, if you have a higher electric field applied you should get proportionally less diffusion current meaning that the width of the depletion region can be smaller and still fully oppose the diffusion current. This is also incorrect reasoning, but where did i go wrong?

Essentially, during the application of a bias, what are the holes and electrons phsyically doing during the transient under this new electric field applied to them? How does the depletion region physically change size?

Feel free to get as technical as needed, but I understand all of this in terms of just using math, but I am looking for a more intuitive understanding. Thanks.

Now, if you have a higher concentration of dopants, you end up with more diffusion pressure which means the electric field must be bigger in order to oppose it, meaning that the depletion/space charge region must be wider. However, what I just said is incorrect, but i don't understand where my reasoning is wrong.

If you understand that there's a built-in voltage, then you should also know that distance and path is unimportant to a voltage. Voltages are scalar. 5V over 1 billion miles is the same as 5V over 2um. Now the electric fields associated with those two voltage are entirely different. Now the reason that the depletion region gets smaller with higher dopants is that there is more static charges exposed in the depletion region. Think of it like this, with a low dopant level I'd have to take 3mm of space to free "20" charges, but if they were a higher density, I'd only have to take 3um to free "20" charges. Remember it's the exposed charges in the depletion region that create the field, not the charges in the drift region.

Now again, if you have a higher electric field applied you should get proportionally less diffusion current meaning that the width of the depletion region can be smaller and still fully oppose the diffusion current. This is also incorrect reasoning, but where did i go wrong?

You went wrong when you thought about the field inside the depletion region effecting things outside the depletion region directly. The field is stuck there. It can't directly effect anything. It does have some secondary effects though. For instance the wider the depletion region, the easier it is to diffuse across the non-depletion areas. This is because there is less distance to the end of the device when there's more length in the field. We use this all the time in BJT's. The other things that a field will do is create a build up of charges on it's edges (You know, all those ones you ripped out to create the depletion region, they want back to where they were). These "free charge" (free because they are able to move, unlike in the depletion region where the charges are held in the atoms of the crystal lattice) areas are actually what is driving the diffusion in the other areas. The free charges are more concentrated by the depletion region than in other places. Again, they want back, but the built in field removes them every time they try so they're stuck at the edge. This creates the "High to Low pressure" that drives diffusion. The higher the field, the more charges you ripped away that want to go back that the field at the boarder resists them, the more concentrated the free charges are, the more diffusion there is. All linked. I'll Try to get picture in here. It really is difficult to see without picture.

Edit: I've found a good Youtube video with all the particles present and a very decent explanation. I hope this helps.

Reverse bias means that the P-side is at a higher energy level and electrons need more energy to get from the N to the P-side.

Not the answer you're looking for? Browse other questions tagged diodes pn-junction or ask your own question.

6
Base Current vs Emitter Base voltage