I have made a simple speaker circuit. It sounds (at least to me) surprisingly good (though an audiophile would probably scream out loud and run away). I have currently run across a problem.

A "simple" fix would be to increase the power supply so I can drive them with higher voltages, but I am a little scared of that :P and it would also put more pressure on the involved components. Using a rail-to-rail op-amp could perhaps improve the situation a little, but there will still a voltage loss across the push-pull BJTs (I guess), and I don't have any suitable rail-to-rail op-amps available.

It's annoying that it almost works. I don't need the best sound quality or volume, but only something that is somewhat acceptable.

Okey. So I did put my oscilloscope to action and probed the voltage before the speakers (after the push-pull).

This is how it looks like with one speaker (and yes there is a lot of >20 kHz noise): 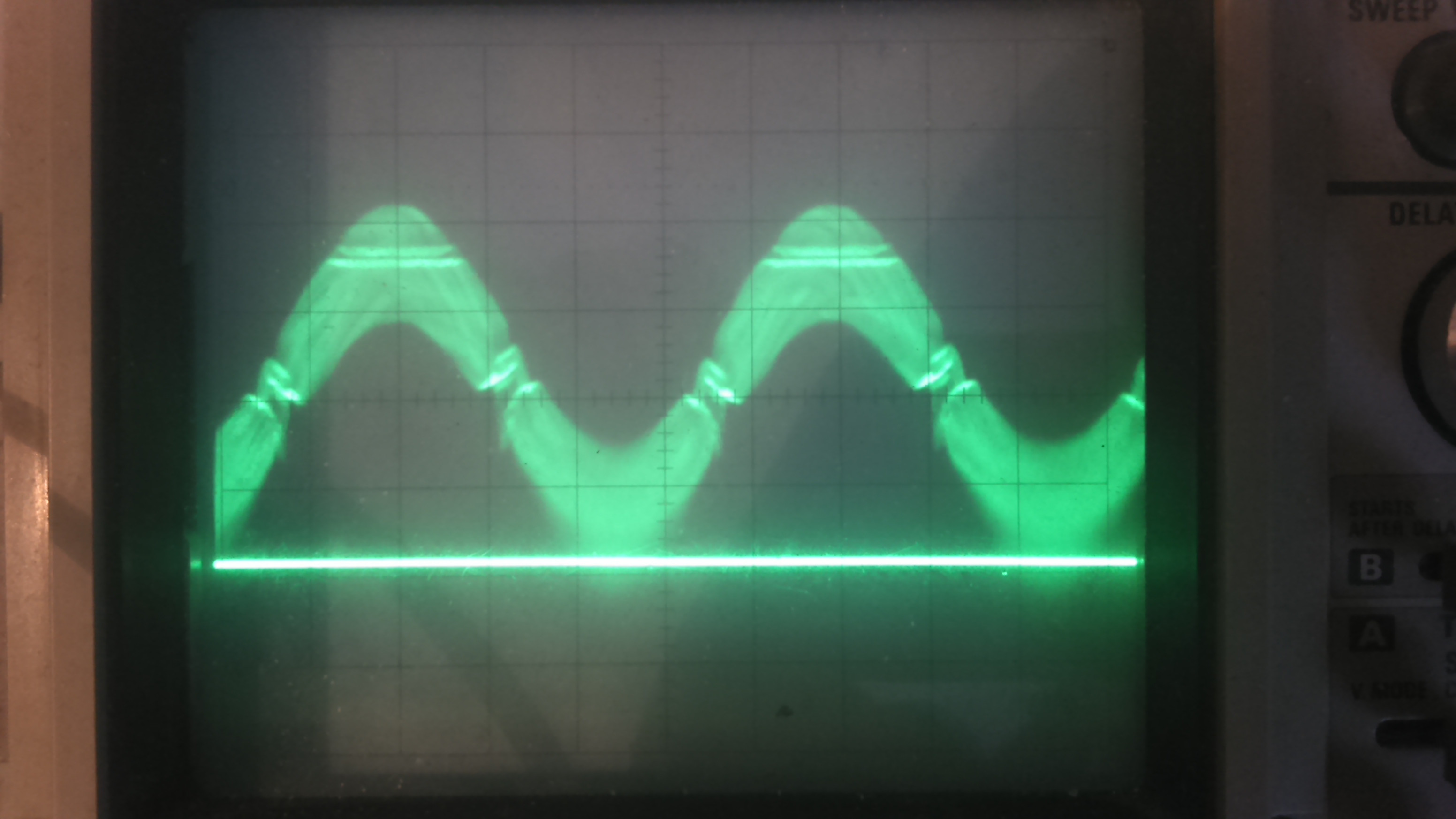 This is how it looks with two identical speakers in parallel under otherwise the same circumstances. The voltage did actually not decrease, but there is this strange thing at the bottom which must be the noise that I hear: 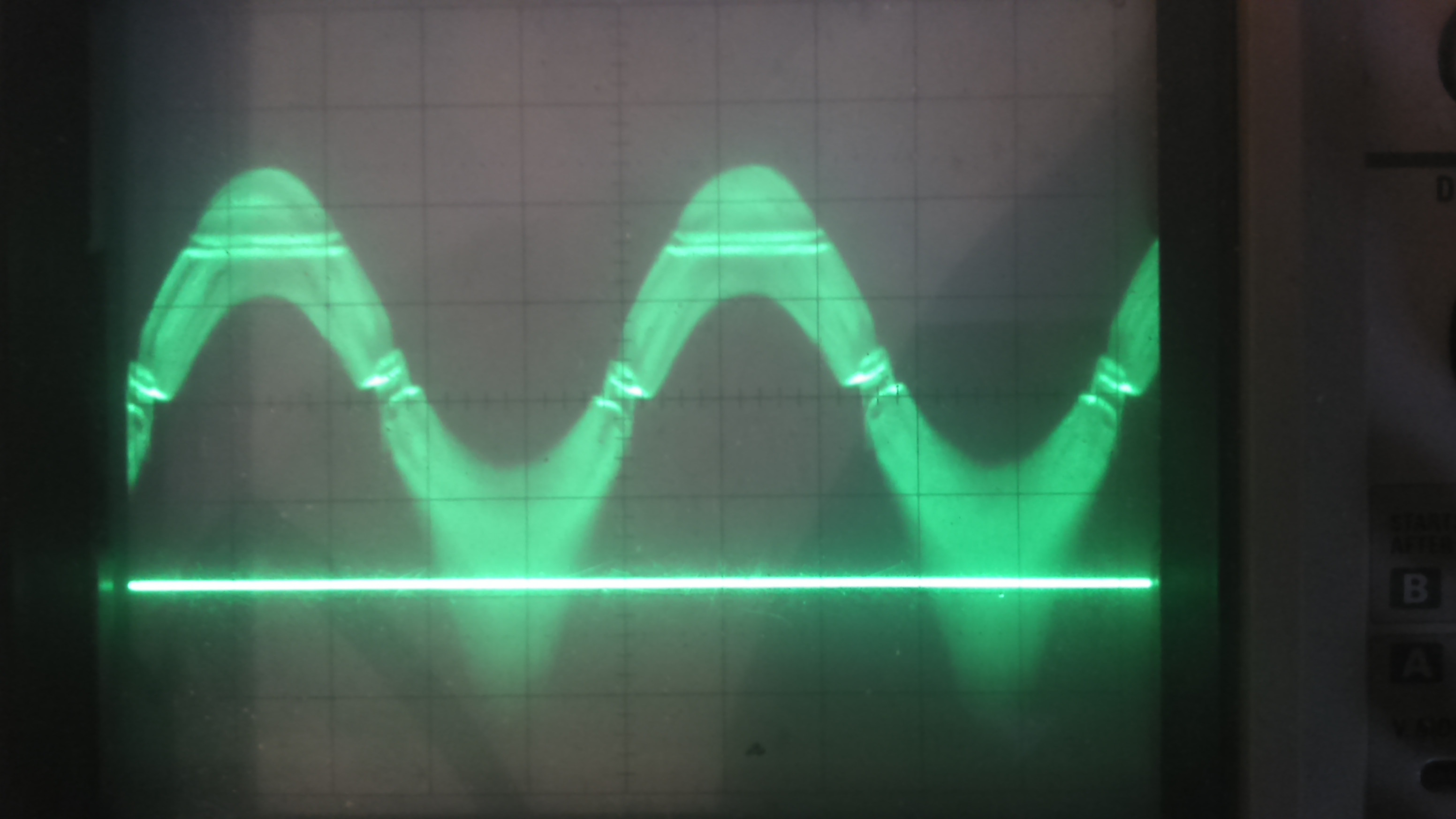 On the following image it is even more noticeable!: 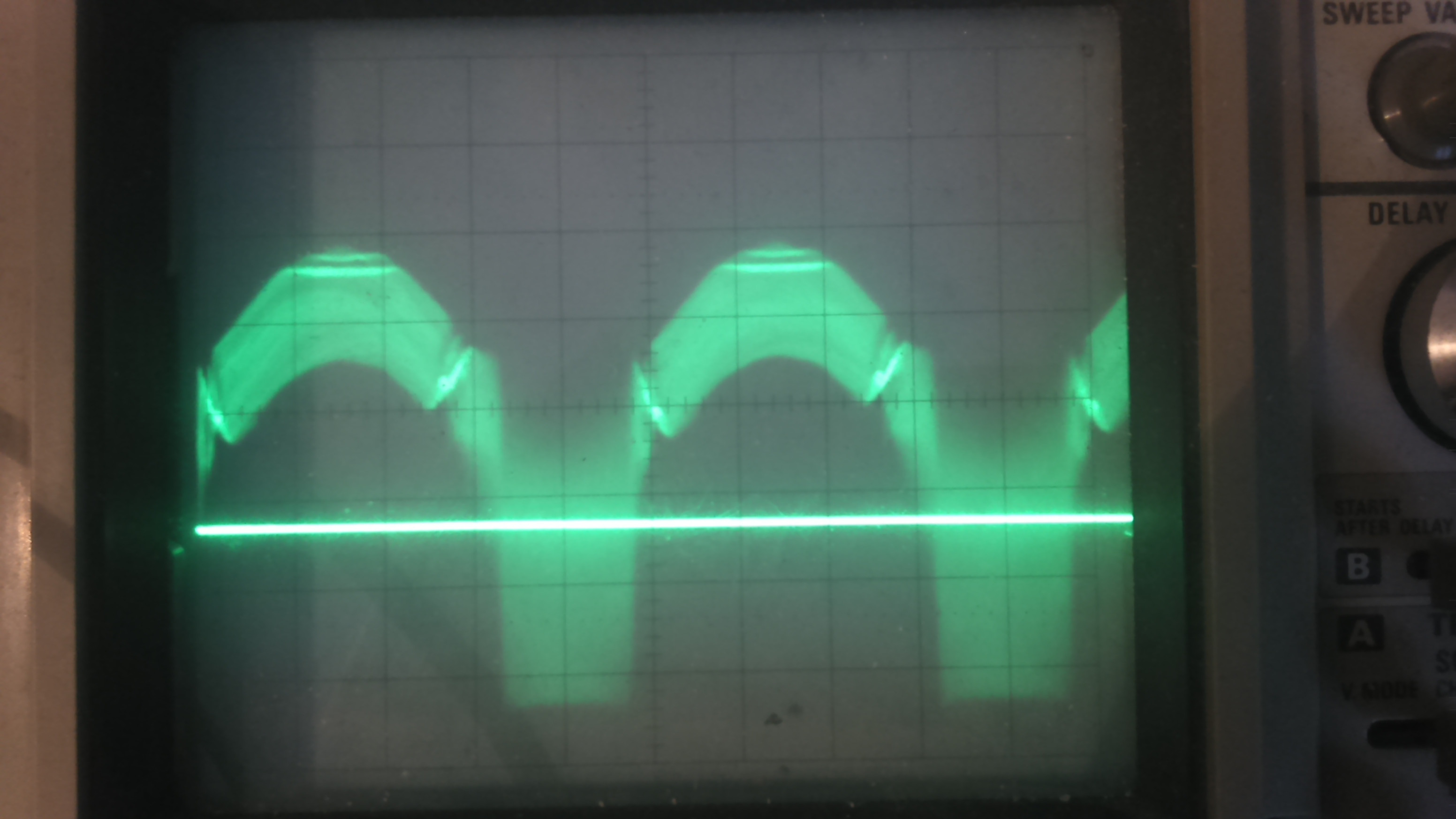 BTW, the second trace is just a marker. It is not showing ground and ground is approximately in the middle of the waveform.

Oh! I am terribly sorry the schematic was wrong on one crucial point. I did have the feedback after the push-pulls! Like this: 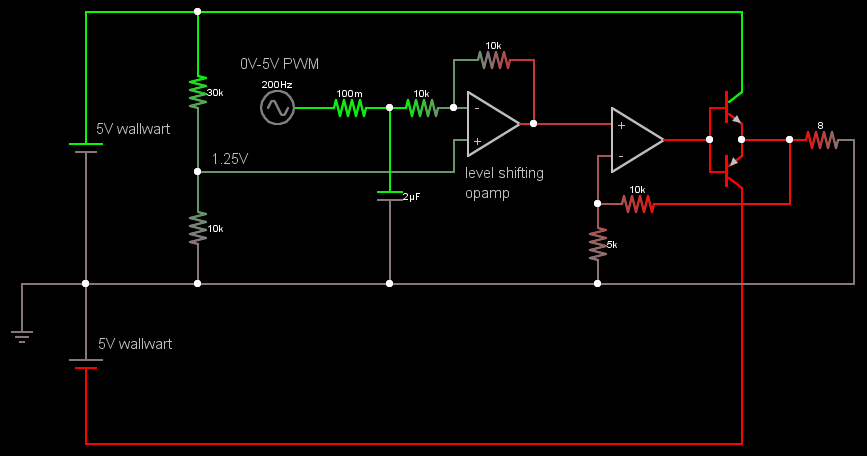 Some more research and the solution

First an image of the audio signal on trace1 and GND on trace2 as requested. It does not seem to be very DC biased: 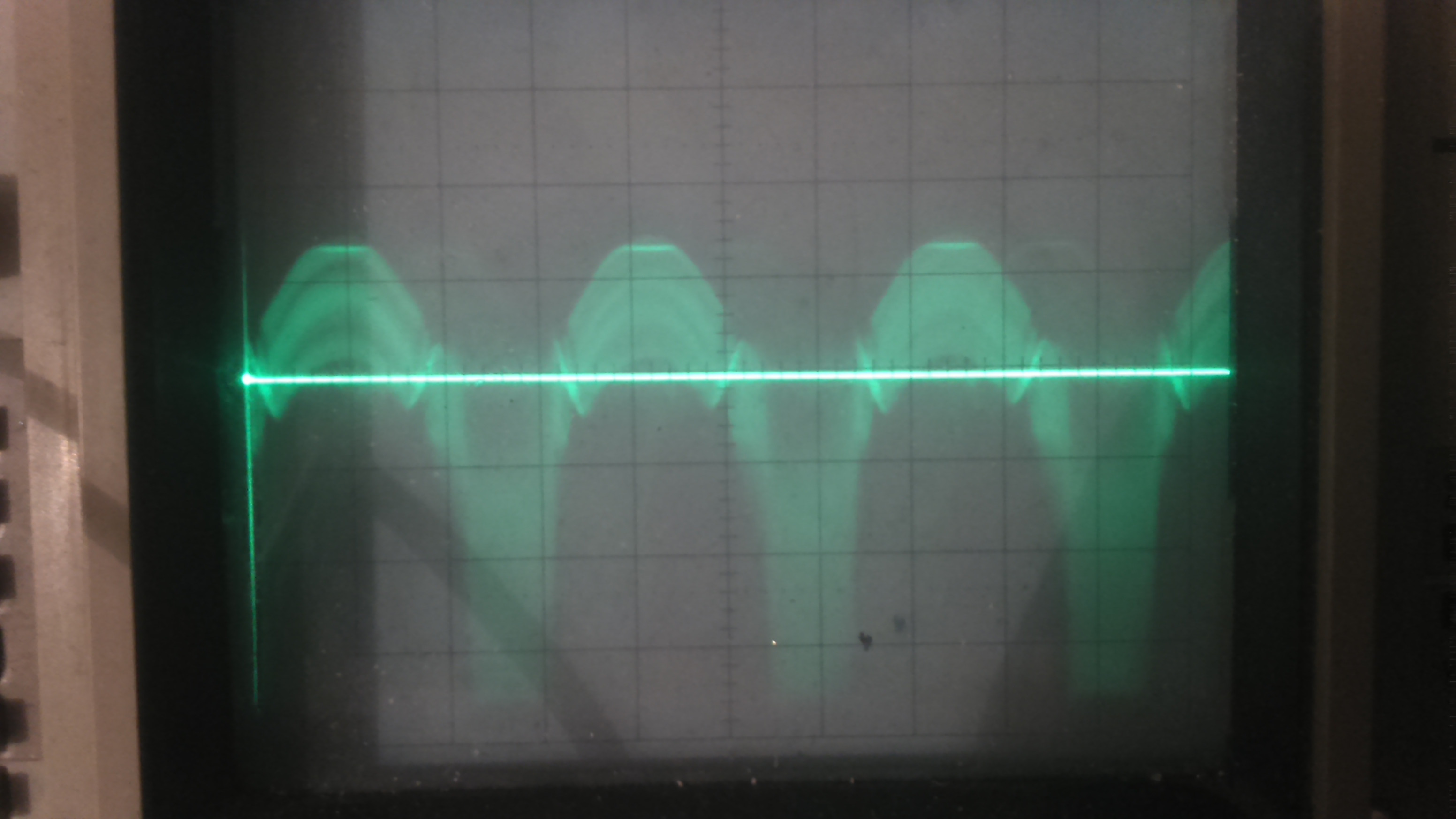 But still it was interesting to take a look at how the rails looked when the audio was noisy. This is picture of the positive rail and GND. It looks noisy, and it gets worse with higher volume: 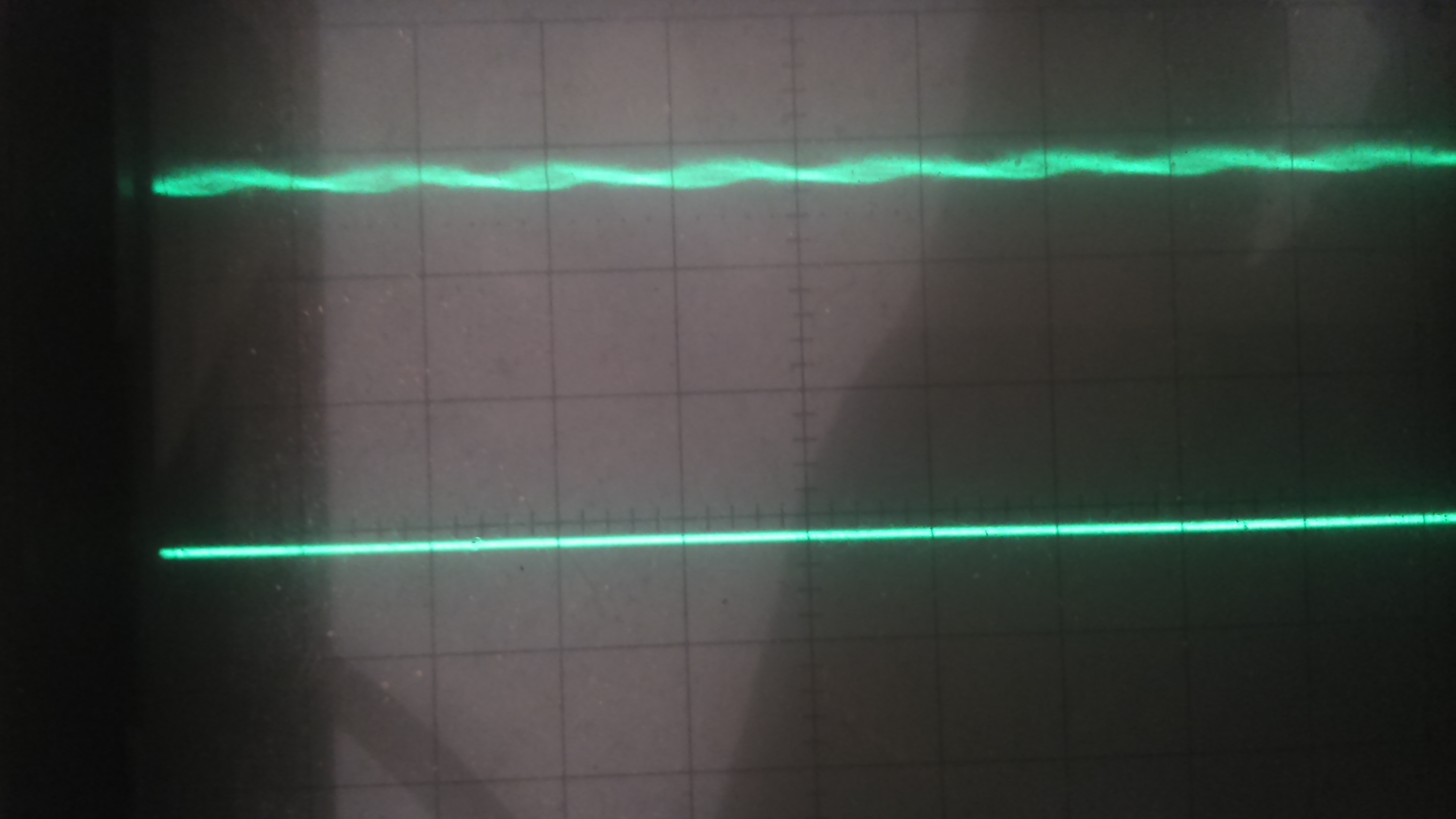 The negative rail is at the same volume and is notably worse than the positive rail, at least to my eyes (my slow camera blurs!): 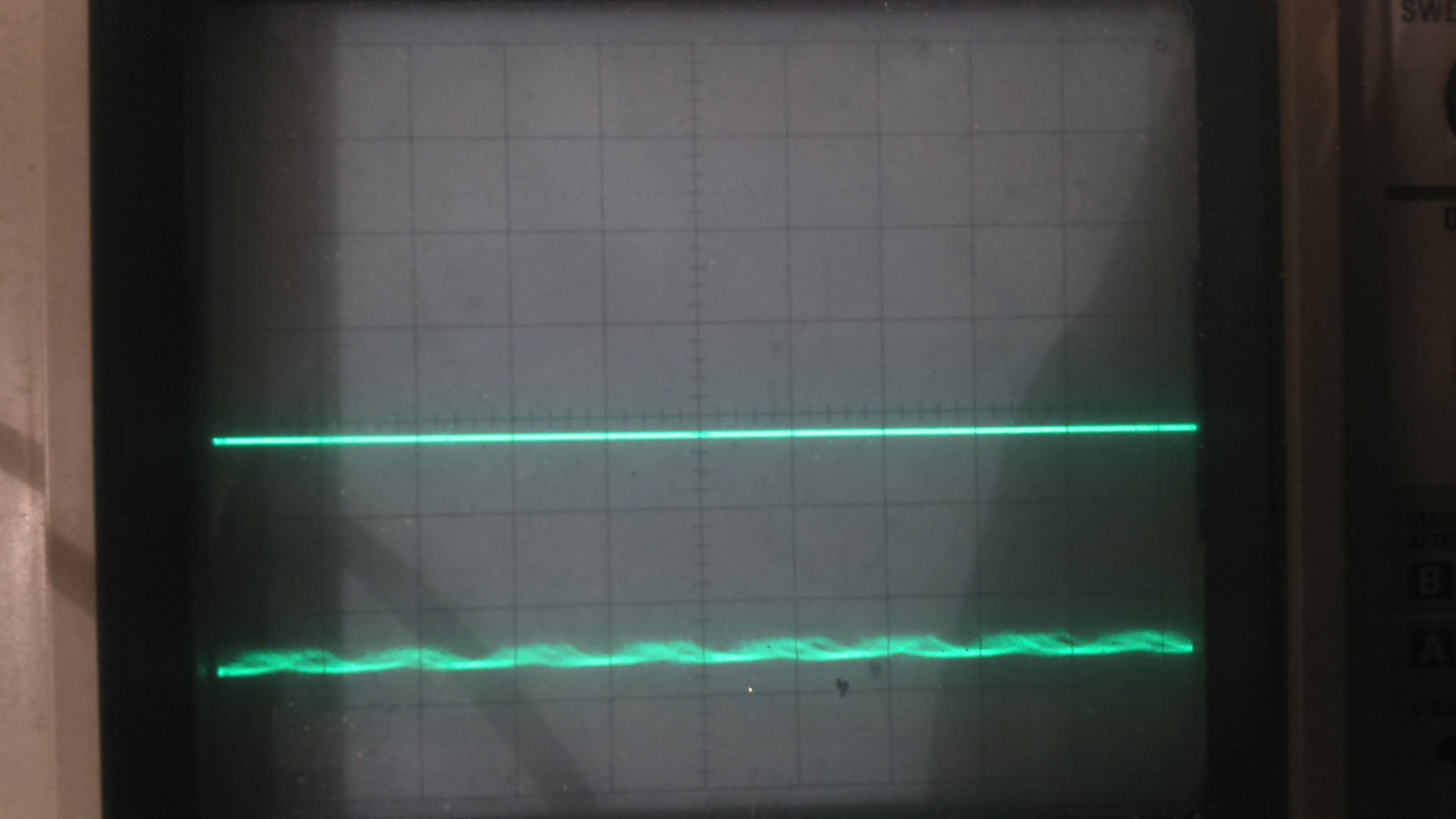 The first thing I attempted was adding a 1 µF capacitor between op-amp output and ground, and I was quite surprised to hear that the noise disappeared!!

This is how the negative rail looks like at the same volume, but with the added 1 µF capacitor: 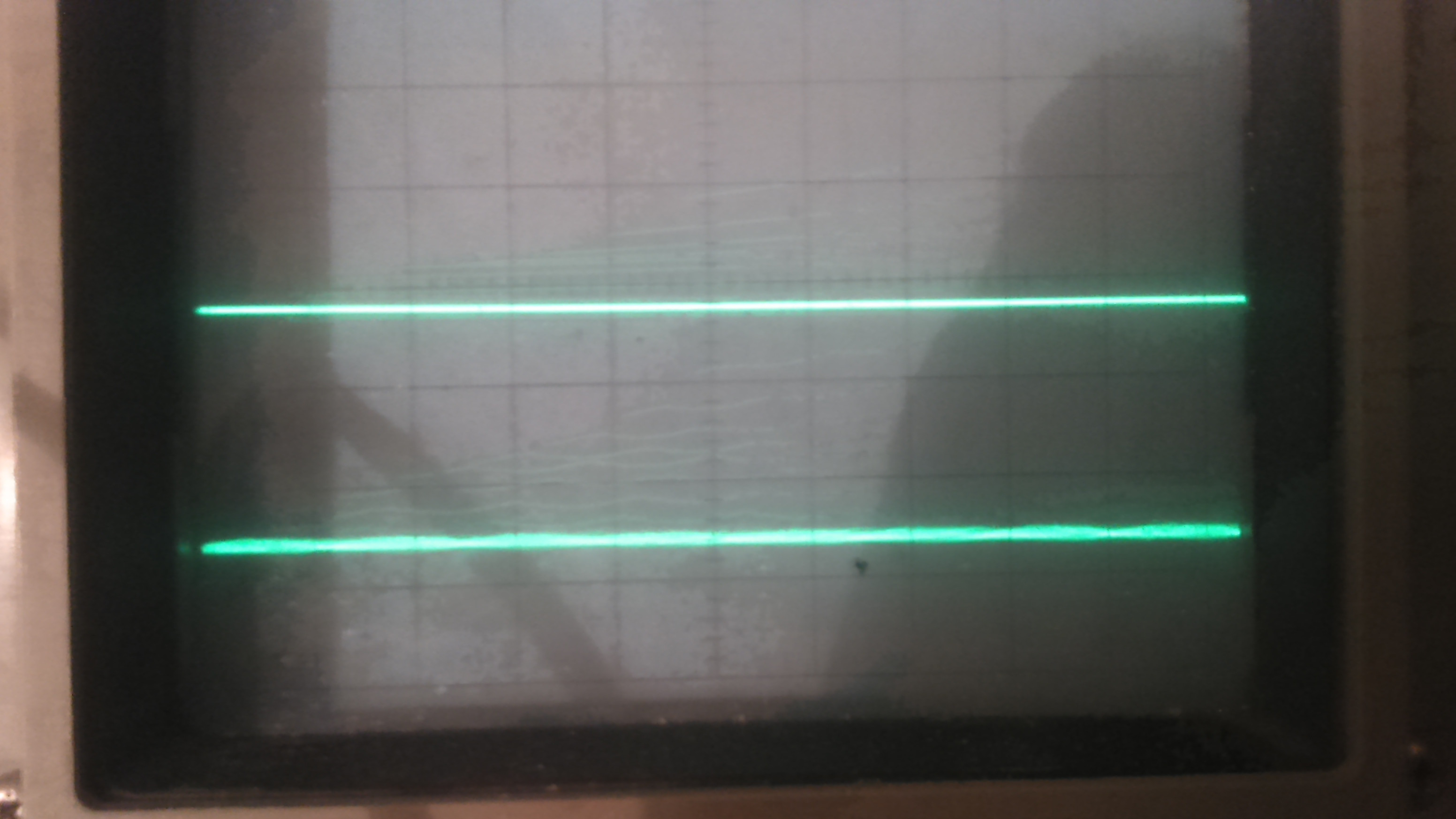 So that simple 1 µF capacitor solved my issue! Thanks to everybody, it would have taken MUCH longer for me to solve this without your help :)

This is how a sinus wave looks after the capacitor was added. Mmm, I can stare at that all day long...: 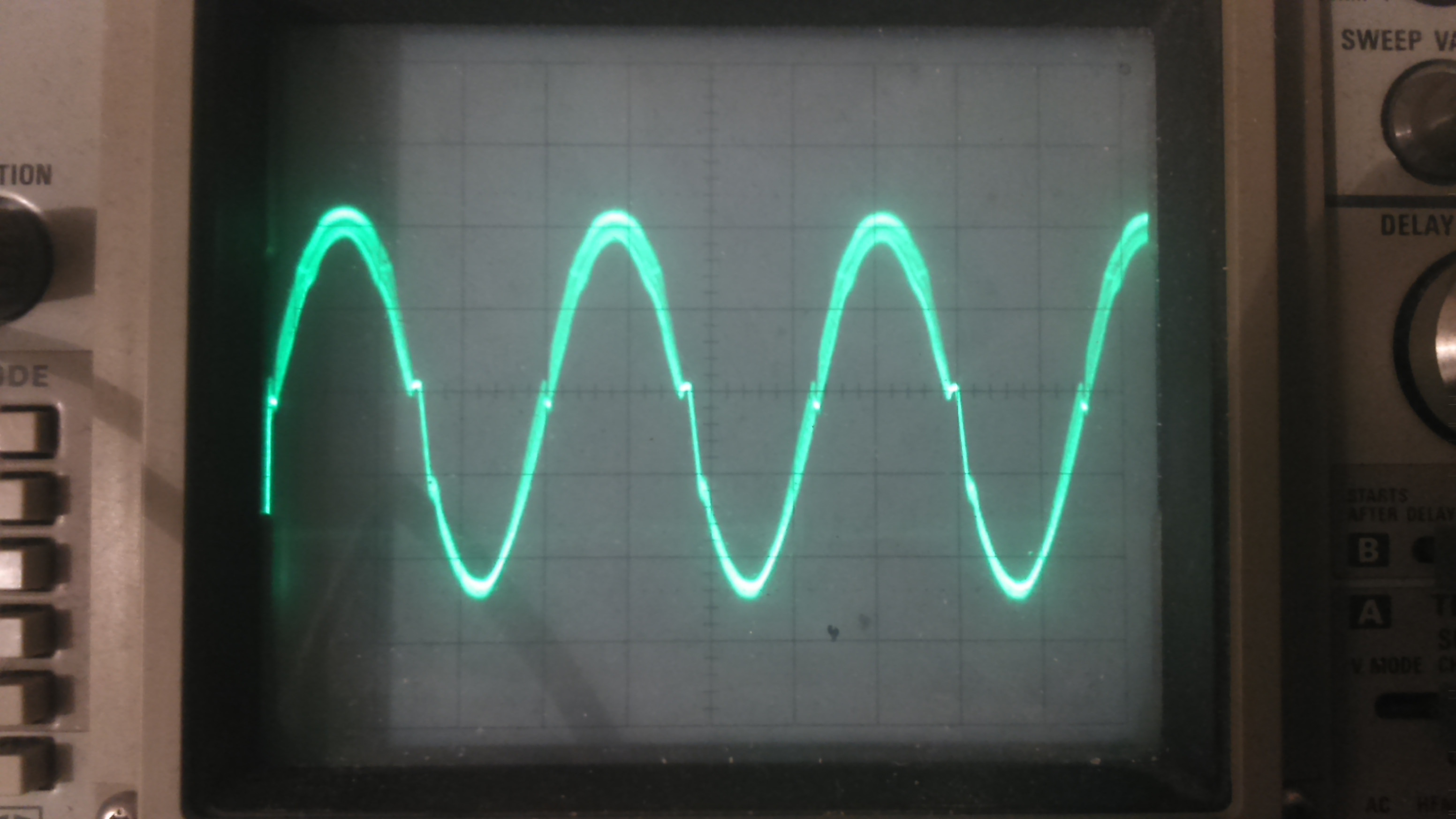 I also added an inductor to filter out the PWM frequencies (~0.3mF), that very much improved the appearance of the sine curve.

Though, even with these two improvements the original issue still arise if I remove the 0.22uF cap between the opamp output pin and GND. Here under are images showing a 440Hz sine-wave with and without that 0.22uF cap. 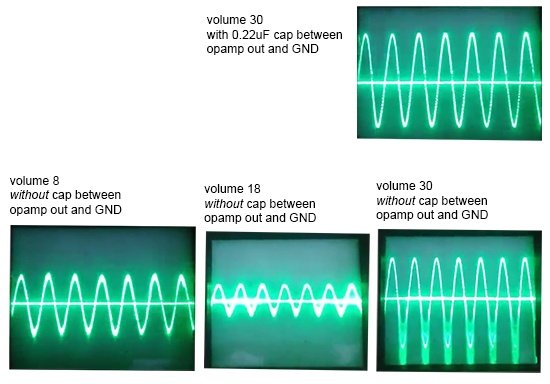 Your amplifier has a fixed output impedance and finite voltage swing. To get the most power out of it, the load impedance has to match the output impedance. Two speakers in parallel have half the impedance of one speaker. This is apparently too low for your amp to drive properly.

Probably your "wallwart" supplies are collapsing under the heavy drain of two speakers in parallel. The lower supply voltage makes the 1.5 V or so deadband in your output a larger fraction of the overall, significantly increasing distortion. You don't say what kind of opamps you are using, other than they are not rail to rail. The supply voltage may be collapsing to the point where there is little active region left between the deadband in the output and the output range of the final opamp.

In addition, parts of your circuit don't make sense and could rather easily be replaced by a better design:

Upon closer inspection, it seems you are level shifting to compensate for the input signal being centered around 2.5 V. This is just plain silly.

You can't hear DC. Even "HiFi" audio only goes down to 20 Hz. The obvious way to deal with input DC offsets is to AC couple the signal. Get rid of all the nonsense to the left of the positive input of the second opamp. Replace it with a 1 µF cap in series followed by a 10 kΩ resistor to ground.

Here is your basic circuit with the obvious points mentioned above fixed:

Note that this is both simpler and will work better.

There are ways to significantly reduce the final stage deadband. Two diodes is a very common approach.

What I usually do is use a couple more transistors in the output stage to give it a gain of 2. The previous stage then only has to drive to ± half the supply range. That gets around needing a rail to rail opamp, which generally aren't available at the ±12 V or more you want to run them at.

Added in response to scope traces

You have even more problems than you realize.

Your circuit is oscillating under load, almost certainly by feeding back thru the power supplies. I should have explicitly mentioned this, but that's what C3 and C4 in my circuit are intended to prevent. Try the circuit I posted. It uses mostly the same parts but should perform better.

I now see the opamp is a LM324. That's not a good choice for audio. I'd use a TL07x with ±12 V supplies at least. That will probably mean beefier output transistors, possibly with heat sinks.

Once you get this working, I can show you how to get more voltage swing and less deadband from the output stage, but one thing at a time. That would be for a new question anyway.

I like that you applied some good electrical troubleshooting technique/logic here. Unfortunately, however, your logic missed a salient point.

When driving dynamic audio transducers (speakers with magnets & voice coils), your amplifier needs to have a lower source impedance than the load it is driving.

The amount that the amplifier's source impedance reaches below the load impedance of the speakers is called the "damping factor" in the pro audio world in reference to it relating to the amplifier's ability to drive the speaker with accuracy while the extra available current (and directly related ability to fight voltage "sags") fights (dampens) the effects of moving air & external vibrations, etc. trying to distort the motion of the voice coil.

In order to effectively run 4 mismatched speakers from your output without frying any speakers & without causing bad distortion, you'll really need to add 3 more final output staves in parallel to the one you have now. Then, you can connect each speaker to its own output. This will achieve the higer volume/volt capability you wanted to get by paralleling the speakers, while avoiding blowing your amp by drawing too much current, and blowing the speaker with the lowest impedance because most of the power would flow through it if the speakers were all parallelled on one channel.

Here's a schematic of a circuit, using most of your existing components, combining low-pass/high-pass on the audio input to get rid of the DC offset & the PWM ultrasonic noise. Also, it includes parallel speaker drive outputs, along with Olin's decoupling capacitors between power supplies & gnd, as well as decoupling the LM324AN.

Note: It would definitely be better to drive each push/pull unit from a separate opamp output, with its own feedback loop, but that would require 2 more LM324ANs (wire use the feed from 1OUT to run all 4 "final out" sections, with each "final out" wired like OpAmps 3 & 4 to 1 speaker per OpAmp pair)

Not the answer you're looking for? Browse other questions tagged audio speakers distortion or ask your own question.

2
Powering two 8-Ohm speakers in parallel with a 4-Ohm per channel audio amplifier
2
Source of Audio Noise at Low Volume — BlueTooth Mini Amp board
1
Wiring a 3.5mm Audio out jack where Speakers were previously
0
What impedance should I get when testing a volume control?
3
Audio Noise with 5532 Opamp
0
Effects of connecting speakers in parallel vs series
3
Loudspeaker volume issue