What is the purpose of transistor and zener in this circuit? 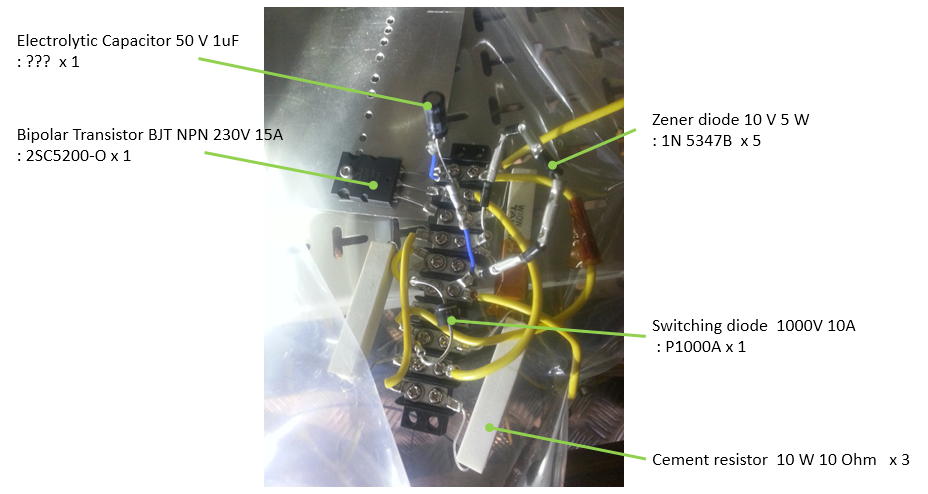 (simulation will not be correct because the diodes are added just by its name.)

Hello, I am a student who is not really familiar with electronics, and these days I start studying several circuits which is being used in our experiments.

I have a circuit we insert between room ground and the circuit with power supplies. I made a diagram from the photo of the circuit that I took.

As far as I know, to avoid too high floating voltage between the circuit with power supplies and the ground, the circuit is to make negative voltage ~ MAX -50V relative to ground. (Zener diode 1N5347B are actually 5 in series, not one. I omitted for the simplicity in the diagram)

I sort of understood by Googling and learning myself that the capacitor and the diode is a safe circuit for sudden voltage peaks (am I right?) But, the center part in the circuit diagram, still no idea after several days study. Only figured out that 1N5347B Zener diode 10V 5W is to endure max -50 V.

Here are my questions..

So far what I learnt about the circuit (left side of the node, Vcg) are,

Here, additional questions came up to me.

(from the previous question) 5. How may C1 1 uF and R2&R3 10 ohms have been chosen? (got to know about R1 to limits the current through D2, thanks to @transistor)

p.s. Am I asking too many questions in one? is putting additional questions not quite the thing? 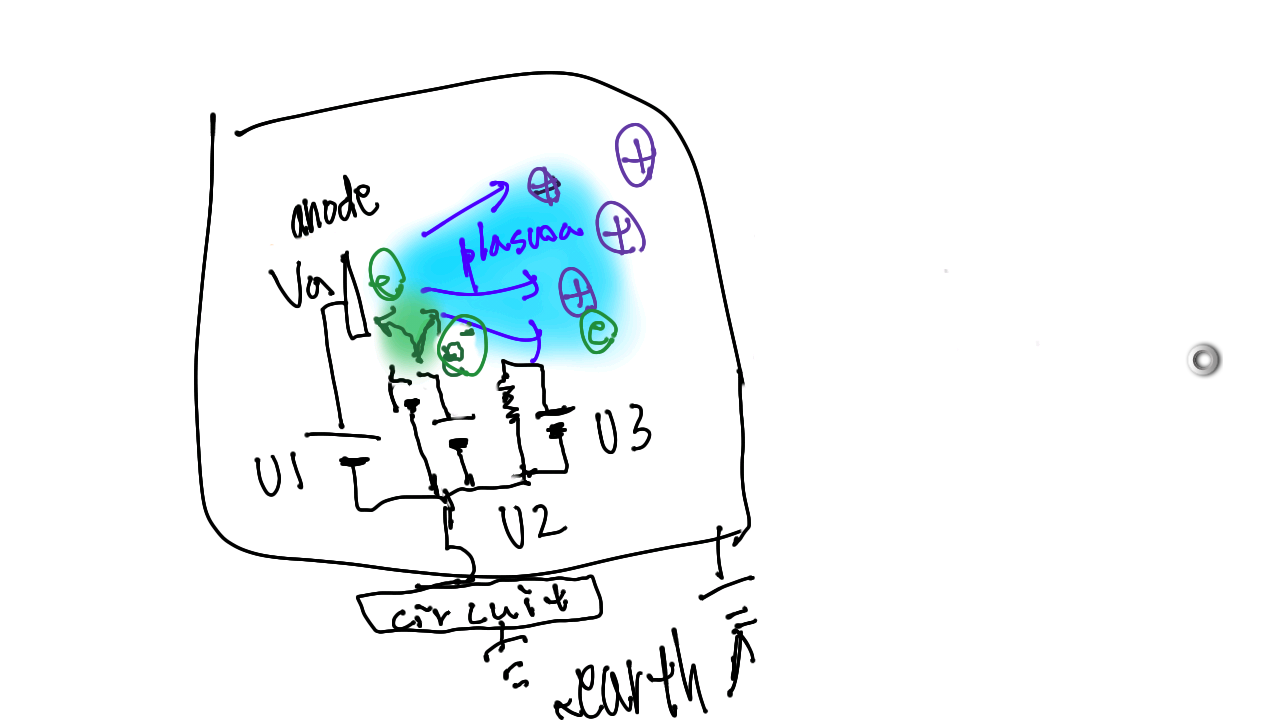 I think @transistor answer makes sense, and I understood its role. But my schematics may have error still, and the figure in p. 338 doesn't show clearly how the circuit will be closed during the thruster operation, I am trying to give as much information as possible. @transistor mentioned about 'closing circuit', and I added a drawing for that. Generated plasma near anode (inside in U1 in the drawing) accelerate to the vacuum chamber wall which is earth ground, so I expect this is the mechanism closing the circuit. In the drawing, the big square grounded is the vacuum chamber. I hope this help to comprehend the circuit for the additional questions.

I'd say your circuit analysis is pretty good and your explanation of circuit use is a great help. Convention on circuit schematics is that current generally flows from top to bottom and since most of us reads left to right we generally put inputs (logic, analog, power) on the left and outputs on the right. What that in mind, I've redrawn your schematic.

What you have described is a "shunt regulator". If the voltage across the regulator rises above the preset voltage the regulator turns on and "shunts" current away from the power source to hold the voltage in control. They are not all that common because they waste power in the shunt circuit - hence the large heatsink and ceramic resistor in your circuit. Also, the shunt circuit relies on the source power-supply having some internal resistance otherwise a huge current would flow through the shunt as the power supplies try to keep the voltage up and the shunt tries to keep it down.

This circuit is a rather unusual, however, because there is no complete power circuit through the shunt circuit. Based on your Hall thruster link (page 338) your circuit schematic regarding the non-closed loop is correct.

So, if all the above is correct, what's happening is as follows:

Please let me know if you think this is inconsistent with any other information you have. I know nothing about thrusters.

Not the answer you're looking for? Browse other questions tagged voltage-regulator zener electrolytic-capacitor floating or ask your own question.

1
Transistor and zener diode
2
What is the purpose of a Zener diode added to the output of a SMPS?
1
Find the Min Value of R in a Zener-Transistor Regulator
1
Confusions with placing and sizing the flyback diode, TVS and Zener
1
Power of the Zener diode
0
What is the purpose of these diodes in this opto isolator circuit?
0
Identify the maximum voltage that can be applied across a Zener, MOSFET and transistor
0
What is the function of zener diode in the fig and power dissipated in zener at No load condition?
0
Zener voltage regulator circuit