I have built this power supply and clock signal extractor exactly as shown:

I have double-checked this and the rest of the clock multiple times.

However, my clock runs twice as fast as it should (each second, it counts to 2 instead of to 1.)

After spending about 5 hours trying to figure out what I did wrong, I read an unrelated article about half-wave vs. full-wave rectification. I then realized that perhaps the problem is with the instructions.

Given that the bridge rectifier in the supplied diagram is full-wave, wouldn't the clock signal from this diagram actually be 120 hz and not (as labelled) 60 hz?

The circuit will work correctly to produce a 60Hz signal from the mains supply.

During the half cycle where the supply terminal is negative, diode in the bridge rectifier forming the ground reference will be reverse biased and you will end up with 0V at the output. 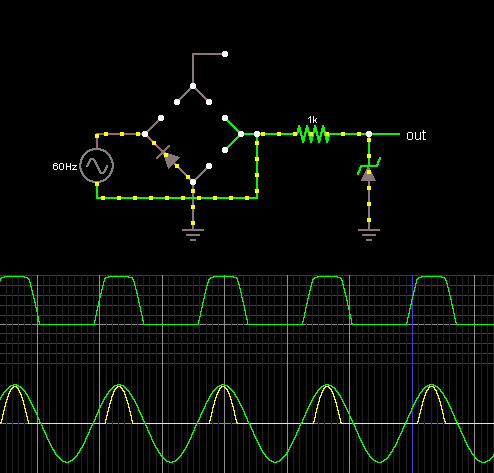 While this circuit will indeed produce a 60Hz clock signal (or 50Hz in some parts of the world), the edges will have a very slow rise time (depending on the supply voltage) which may cause some phantom clock edges, especially if there is any noise on the power supply rails.

Ideally the signal would then be fed into a Schmitt trigger which will square up the signal edges while also removing phantom clocks caused by noise using a hysteresis loop.

As to why your circuit is running at twice the frequency, it is impossible to do anything but speculate as the rest of the design has not been disclosed.

Not the answer you're looking for? Browse other questions tagged power-supply clock clock-speed bridge-rectifier or ask your own question.