The following circuit is a class C (actually class B) amplifier used in AM modulator in my previous question.

According to the textbooks, the transistor is driven into saturation in this class. A practical design has an additional resistor in the base. However, the results of simulation shows that collector-Emitter voltage is always above 0.2v and the transistor never operates in saturation.

Why doesn't the transistor operate in saturation by inserting the resistor R6?

Simulation with different time steps give different results. the question was asked based on timestep=0.1us.

Here is the results of time domain analysis with timestep=0.01us:

It's somehow confusing for me. The above plots are achieved with time step 0.01us with circuit lab (since I haven't a simulation program on my desktop). but the previous results (before edits) were obtained with time step 0.1us. I don't know which one is correct!

Also the base voltage is continuously decreasing.

I've also placed a FET instead of BJT. here is the result for collector voltage and collector current.

Why doesn't the transistor operate in saturation by inserting the resistor R6?

Why should it? Saturation has never been known to be very useful even for digital circuits because it's slow (This is of course only referring to BJT based designs and not MOSFET designed circuit where we depend on Saturation). This is due the the internal workings of the BJT. The Collector-Base junction is the largest junction due the the doping levels. When you forward bias the Collector-Base junction, you get a smaller depletion zone, which happens to be a bad thing. What happens is that you get excess holes leaching into the Collector instead of the Emitter. These holes have an almost zero chance to get to the Collector metal junction due the the relatively large distance from the depletion area to the metal junction (on the order of several diffusion lengths). This means those holes will recombine and not exit. Likewise, most electrons must also combine in the base region because if they didn't you'd get a charge build up. This makes the base a poor controller of the current and it begins to lose it's effectiveness at controlling the current from the collector to the emitter. In fact, in proper saturation, all new current flowing through the emitter is provided solely by the base.

A little wordy, I know. However, you need to understand the physics of a device to explain why things happen. With that knowledge in mind, we can see that if the number of minority carriers and majority carriers is lowered through excessive recombination then that means it will take longer to get back to a level which is useful. This is shown in diodes all the time as "Reverse Recovery," and the same phenomenon is going on in the BJT. Now, for a BJT the "Reverse Recovery" is a little different and a little the same. The same physics is going on but for the opposite effects. The reverse recovery time is now the time it takes the base to become a useful current controller with Hfe > 50 instead of Hfe closer to 1-5 in saturation. This "C-B Reverse Recovery" time is now the deciding factor in turning off the device since that junction must re-establish itself to be in cut-off. When you combine this with what I said before about it being the largest junction in the BJT, you see why saturation means your device will slow down. It has to take more time in order to rebias the C-B junction into reverse bias again to turn off. Saturation causes a BJT to slow down, become less current efficient, become less power efficient, and have lower amplification. All bad.

I hope any of this made sense to you, and if it didn't, remember, it just quantum physics, electromagnetics, and semiconductor device physics. This stuff isn't easy and takes time to understand.

I took the time to get a hold of some sim time with a computer that had MultiSim 13 and ran the simulations needed to verify my old Professor (or prove him wrong, we'd let the data speak).

This is the circuit that I simulated:

Here is what I got:

In conclusion: You can clearly see that the voltage on the base of the transistor is never higher than the voltage on the collector. Per definition, this means that the device can only operate in either the "Cut-off" region or in the "Forward Active" region. This has been an enthralling question and I hope this has satisfactorily answered your question. If you need any clarification, please ask and I'll see whether I can get a hold of more sim time to answer it (1e-009 time sims take a few minutes each so if you need more charts please understand if I only get 1e-007). If the question is on device physics, please ask it in a new question as those answers can get quite lengthy.

With a base current of 5 mA the table shows the saturation voltage to be 0.3 V. The other thing to consider with BJTs is that as you pump several mA into the base, the base-emitter voltage gets to a point where the collector-base region becomes forward biased and now the base is "lifting" the collector significantly above the "conventionally accepted" saturation voltage of 0.2 volts. Basically the BJT is not working in the conventional sense.

Looking at the characteristic curve of the 2N3904 you can see that saturation progressively rises as base current increases: - 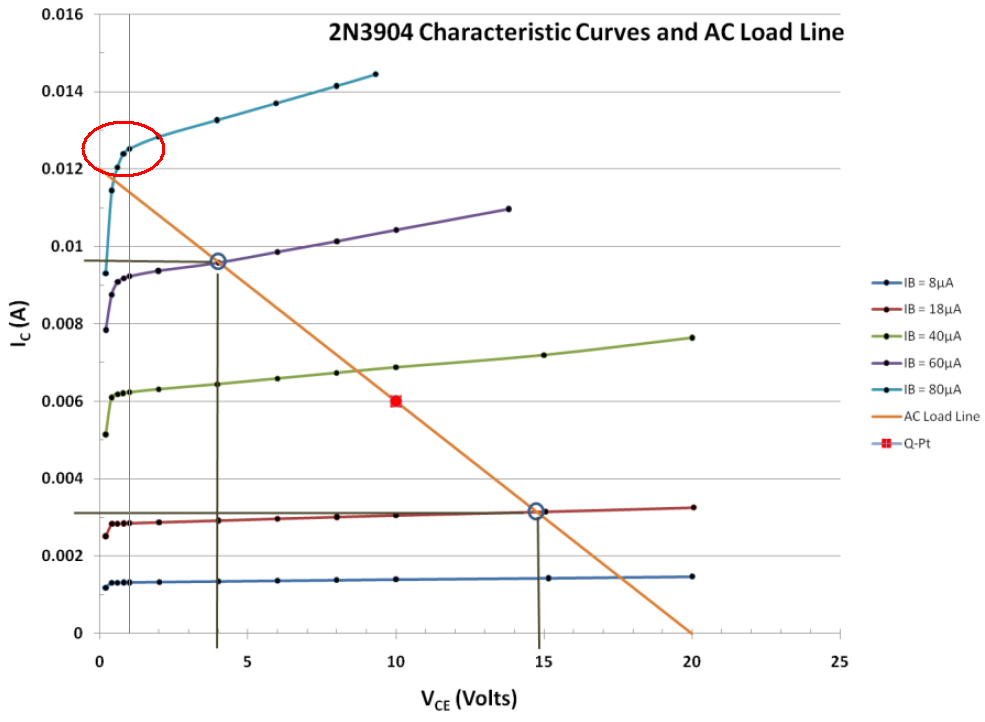 I've shown a red circle on the graph at a collector current of about 12.5 mA - clearly, saturation is significantly above 0.5 volts and borderline 1V.

Not the answer you're looking for? Browse other questions tagged bjt modulation saturation am or ask your own question.

1
Analysis of Class C AM modulator