LED still glowing with a capacitor in series 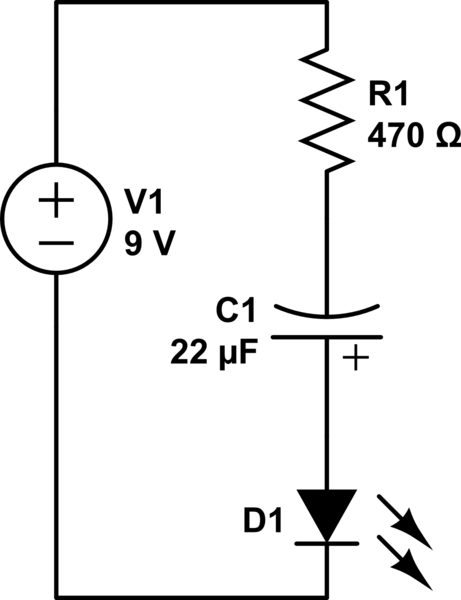 I have a 470ohm resistor, 22uF capacitor and a 5mm LED in series (same sequence as described), connected to a 9V DC battery. I was expecting the LED to fade away but it didn't, it continues to glow with full power.

I am not able to understand why, your inputs will provide clarity.

The isolating oxide layer can not only be damaged by reverse polarity, but also dissolve over time if no voltage is applied to the cap. As soon as forward voltage is applied, the leakage current cures the oxide layer by electrolysis, so the cap heals itself. This is why it is sometimes recommended to slowly ramp up the voltage on vintage tube radios that were unpowered for dozens of years, although in some configuration under-heating a tube is bad for the cathode. The process of creating or restoring the oxide layer is called forming.

Not the answer you're looking for? Browse other questions tagged led capacitor series or ask your own question.

10
Capacitor behavior in oscillating circuit
3
Why is this Circuit Measuring 1.8v
7
Simple transistor & capacitor circuit question
0
LEDs in series but only one glowing
2
Could use some help on what should be a simple LED wiring scenario
1
Can Radial Electrolytic capacitors blow up from AC?
0
Use one or two transistors to switch an LED from PIC
3
How many ohms do you need before you need a resistor?
1
Trouble splitting off LFO signal to drive LED
3
Is my multimeter broken?