How to determine capacitor and inductor values for parallel tank circuit?

There is the formula \$\frac{1}{2 \pi\sqrt{LC}}\$, which can help find the value of the capacitor or the inductor if one of them is known. But if them both unknown and i would like to make a parallel tank circuit that will resonate, for example, at 2400Mhz, how can I determine the value of both of them? 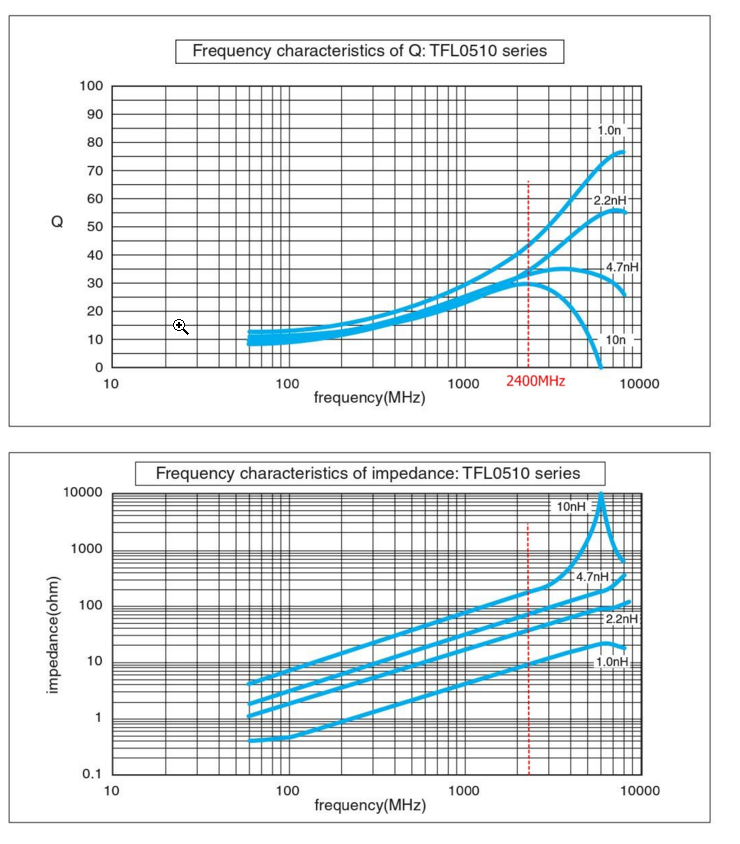 EDIT In the attached graph,it can be noticed that the Q factor value at 2400MHz is higher with 2.2nH and 1nH(1nH is more significant) inductors than the 4.7nH one(also they have lower impendance).So,while they,also,in the practical range that you mentioned before(1nH-10nH)and a capacitor can be connected in parallel to them,What is the reason for choosing,actually,the 4.7nH one?

You can't from that formula. However you can determine the value of their product.

You have a free choice of one component. Then the value of the other component is given by the formula.

Usually, as most people have a larger variety of capacitors in their junk box than inductors, we pick an inductor, then look for a capacitor, or combination of several, to the right value.

When you're more advanced, you can worry about the impedance of the tank circuit, given by sqrt(L/C), or the Q factor into a given load, to fully determine both components.

An obvious criterion is that both components must be realisable, that is, physically possible to make. Let's use your 2.5GHz example. In a simulator, you could use 10nH and 0.4pF, or 10uH and 0.4fF, or 10pH and 400pF, and they would all resonate at 2.5GHz.

Let's say you want to build it on a real PCB. Let's say you have a 1mm gap between a transmission line and ground, and you want to fit a parallel LC in that space. Let's find the largest and smallest inductor that will fit the bill.

The smallest inductor you can use that will bridge a 1mm gap is a straight piece of wire 1mm long, which for practical diameter will have an inductance of around 1nH. That's the lower bound for our L.

Wound inductors have inter-turn capacitance. This self-capacitance turns them into a parallel LC circuit already. This resonates at a frequency the manufacturers call the SRF, or Self Resonant Frequency. Obviously we can load extra capacitance onto the L to bring the frequency down, but we can't add negative capacitance. This limits how large an inductor we can use. The larger the inductance, the more turns, and the more capacitance.

Coilcraft.com is my 'goto' for inductors. Let's look at a few of the low value inductors from their 0603CS range, a small general purpose range about the right size for our 1mm gap. The SRF is specified as a minimum, the typical will be a little better. But's let's go with the minimum. I'll list them as (inductance , SRF ).

We can't use the 47nH one. If we use the 27nH one, the SRF is nearly 2.5GHz. Almost all of the required shunt capacitance is being provided by the inter-turn capacitance of the inductor. Now unfortunately, while the inductance is well specified, tolerance to 2% for some values, the SRF is not specified to a value, it only has a minimum. This means that the effective capacitance could vary widely from part to part. Not the way to make a reproducible design. So I'm going to choose 10nH as the upper bound.

So that means the only practical values for inductors that we can use are in the range 1nH to 10nH. In this case, I would start with the geometric mean of the bounds, 3.3nH, and see if that gave me reasonable Q or impedance level in my circuit. I notice Andy aka picked 4.7nH in his answer, identical to an engineering approximation!

The fact that the inductors have a stray capacitance means that any capacitor added for resonance must take account of this, and be reduced accordingly. Let's push through the sums for the 4.7nH value.

At lower frequencies, you would have a wider range of practical components available, but it's still a range, limited by the practicalities.

A little more about component selection. Now that we have established the 1nH to 10nH range as being suitable for 2.4GHz use, what actual value should we use? We need to look at our overall circuit, are we designing a filter, or perhaps an oscillator? A 1nH inductor has an impedance of 15j\$\Omega\$ at 2.4GHz, 150 for the 10nH. What happens if our design requires, say, an impedance of less than 10j\$\Omega\$, or more than 200? All is not lost. We might make the inductor out of track instead, or if it's a narrowband circuit, out of a length of shorted transmission line ('cleaner' than a wound inductor, but it has its own problems). If it's part of a filter, we may instead choose to buy a dielectric resonator filter, rather than try to make it from discrete components. We might decide our impedance level is making things difficult, and transform to a new impedance that allows us to use components in our preferred range.

The point is that making a resonator is only half the story, it has to be used in something, and it's the specification of the 'something' that allows us, or requires us, to define both the component values. Unless it's electronics 101, when just simulating any random resonator is good enough.

Here's the first formula to start with: -

This allows you to understand the ratio of L to C given that you already know the Q-factor yhat you need. R is the series resistance of the inductor.

If you don't know what Q you want then here's a crash course: -

Pictures taken from here (an answer I previously answered that may provide useful information).

So, given Q and some amount of series resistance that you will want to set to help determine Q you can get to the ratio of L to C. It's just math now - C becomes a value related to L and your first formula is used to get the resonant frequency.

Given the operating frequency you mention a first pass guesstimate is around 4,7 nH for L. The formula then tells you that C is going to be about 1 pF - this gives you about 2.32 GHz resonance. Bear in mind that at this frequency the coil capacitance and PCB parasitic capacitances are going to make this problematic to control precisely and it might prove more useful making the inductor from two parallel tracks a few mm long with the capacitor soldered between them - keep the heat on and power on and move the cap with the soldering iron until things look spot on frequency wise.

Don't underestimate how much trickier this will be at 2.4 GHz compared to running at (say) 500 MHz (where it is fairly easy to do but I'd still probably use a stripline inductor as I've just described at 500 MHz +.

EDIT to give some math: -

If you mess around with the formulas for resonance and Q you can get C in terms of L, Q and R: -

If you plug that into the resonance formula and do some math you find that...

So, let's say you want a Q of 100 and you assume the AC resistance (not DC resistance) is 1 ohm. Plug the numbers in and L comes out at 6.63 nH. But of course you have the problem of what R actually is and you will have to read the data sheets carefully but many will provide you the Q value of the inductor.

So, plug those numbers back into the formula and you get: -

I guess from a new starting point it is a bit daunting - I kind of naturally knew the value would be about 4.7nH and calculated capacitance based on that knowledge but, hopefully there is a helpful (if slightly tortuous) path in the words above.

Not the answer you're looking for? Browse other questions tagged capacitor inductor tank or ask your own question.