How does this e-match igniter circuit work?

I'm working on building a circuit to ignite an e-match for parachute deployment in an amateur rocket. Unfortunately, my background is in CS, not EE, so I'm a bit lost in the hardware portion of this endeavor.

I asked a friend of a friend for some pointers and was given the schematic below. Building it isn't a problem, but what I really want is to understand how & why it works. I understand the basics like the switch is used to enable the fet which will fire the igniter and that the capacitor is used because the lipo battery isn't capable of drawing upwards of 1A instantaneously, but beyond that and my understanding gets more cloudy.

That said, my questions:

Any insight is greatly appreciated! 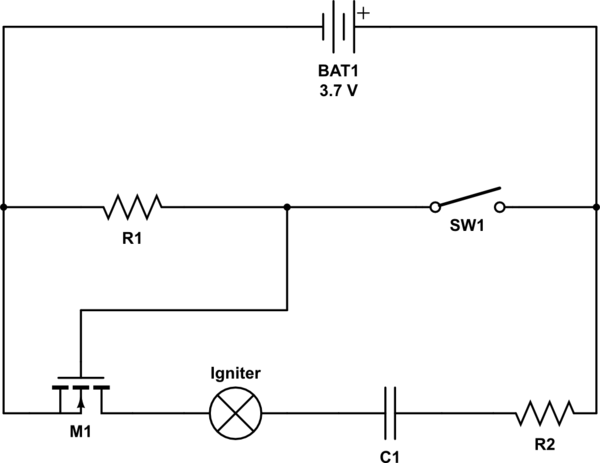 At a "high level" your explanation is basically correct. Though some lipo batteries are fully capable of supplying 1A into a circuit, at least for a short time. It actually depends on the capacity of the battery used.

The capacitor would be used to build up a substantial charge over time, this charge can then be quickly discharged into the igniter. A resistor in series with the capacitor limits the charging current into the capacitor, allowing it to charge over time without overloading the battery. In a series configuration the basic capacitor charge rate is estimated by the equation t=5RC, with R in ohms, C in farads, t in seconds. After that amount of time the capacitor is very close to it maximum voltage.

R1 being connected between the Gate and Source pins of the MOSFET (M1) keeps the gate pin grounded, this insures that the MOSFET stays off when SW1 is open. The value of R1 is not very critical, it can have a wide range, it should just not be so low that it swamps out your battery voltage, 1k to 100k should be OK.

However, as shown, your schematic you will never get 1A through the igniter. The circuit must be incorrect. There is also the possibility that 3.7v will not be enough to trigger the igniter, (it depends on the specifications of the igniter). I have seen similar circuits using one or two 9v batteries.

If we do assume this igniter type can be triggered from only 3.7v there is a simple modification that can test this. First break the connection between the igniter and C1, then connect the open C1 pin to the "-" battery end, (left side of M1-R1 connection). Then the open igniter pin connects to the C1-R2 connection. See the red revised circuit section below.

In this new configuration R2 will charge C1 at a fixed rate. The rate depends on the values of R2 and C1. For testing you might start with C1 at about 1000uf and R2 at 1k. This will let the capacitor charge up to the battery voltage in about 5 seconds. If that seems too long you could reduce the value of R2 but if the value becomes too low it might discharge the battery at too high a rate. (For overall control you may want to place a main power switch inline with the "+" battery point.)

A micro I/O line could replace the switch, it would be connected at the R1-SW1 junction and a high signal switches the MOSFET on. Better yet the switch could remain in place and the right side pin opened (at the + battery end) and the micro I/O pin connected there. This way the switch would act as an additional safety device that will enable connection to the micro control. See the circuit section in blue.

To expand to additional igniters you could just parallel several of the circuits (all powered from the same battery).

If the igniter does not fire you might need to increase the value of C1, or the 3.7v battery might not be enough voltage to light up the igniter, (try one or two 9v batteries). If C1 is increased in value the charge time will increase.

One final safety feature would be to add a bleed off resistor to discharge the capacitor after a period of non use. This reduces the chance of an unpleasant surprise when hooking up a new igniter. See the circuit section in green. (A way to power off the circuit would be needed for this last idea. Either a main power switch at the battery or removal of the battery when not active.) 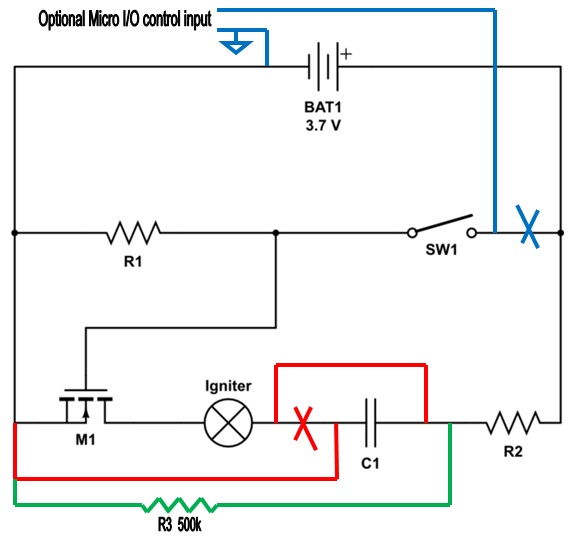 Not the answer you're looking for? Browse other questions tagged microcontroller capacitor mosfet circuit-design or ask your own question.