Mosfet, resistance between drain and source in circuit 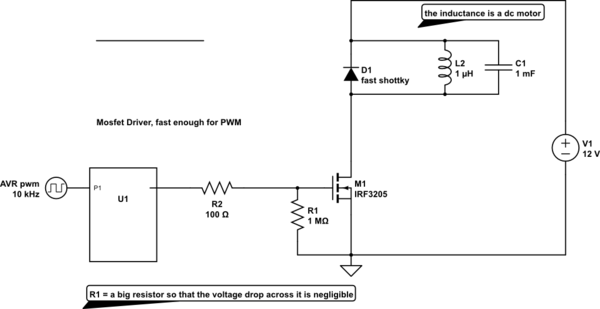 is it possible to measure resistance between drain and source if no motor(inductance) is connected or do the diode/capacitor falsify results?

assuming the gate still carries a charge after being connected to a power supply, do i need to connect it to a power supply ground to get rid of the charge or just shorten source and gate? can there be a charge at all or will R1 (1MOhm) take care of that?

So it's perfectly possible to measure the effective resistance of the MOSFET in your drawing if you replace the motor with a resistor or other element which produces the same current as the motor would draw. But it is not (reasonably) possible to accurately determine the effective resistance without actually drawing current. Among other things, it's necessary to take into account of whatever heatsink has been attached to the MOSFET.

The resistance of the mosfet should be low, in the 10mΩ's or even lower (check your datasheet) when its on and you can check the resistance with a meter (but the result might not be entirely accurate.

If the mosfet is not switching on, the gate voltage needs to be higher than the drain to for the mosfet to switch on, so adding a 1MΩ resistor to ground isn't going to change that, it will not protect the gate from inrush current. Put a resistor in between the driver and the gate if the driver doesn't have protection. The gate is a thin layer of silicon and it's easy to "blow out" with ESD or inrush current, it needs protection. A resistor of 100Ω should do the trick.

1
Gate biasing of common source MOSFET amplifier
1
Control of a coreless DC motor using a PWM and a mosfet
3
MOSFET Drain, Source and Bulk connected to a source
1
Drain to Source Current Waveform on Mosfet is Slow
5
MOSFET like relay for short-circuit
0
fqp30n06l questions
0
Is the MOSFET NTE2390 broken if connecting only source and drain powers a motor?
0
Is there a connection between Drain-Source voltage and Gate voltage?
0
What is the State of a MOSFET with a Constant Source Current and Floating Gate?