Confusion about dot convention in an ideal transformer

I am confused about voltage polarity and current direction in transformers , for example the equivalent circuit of the ideal transformer in figure(a) the instantaneous voltage polarity of the secondary is positive at the dot terminal,if we connect a load across the seconday terminal, isn't supposed that the current goes out from the dot to the load? or does that mean that the voltage and current of the secondary side are 180 degree out of phase? 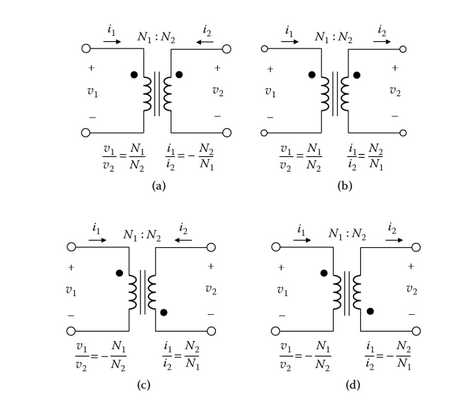 Note that in case (a) the ratio of the currents is negative while in (b) it is positive but the secondary current arrows are reversed. They both, effectively, say the same thing.

I've never seen it expressed as in (a) but I can see that it may make some sense to present an ideal transformer with current in from both sides as neither side is then assumed to be "input" or "output" but both can be inputs, etc.

(b) is the normal way of thinking in most electronics applications. You may find that (a) has its uses in electrical utility grid transformers where power can flow either direction to suit generation / demand requirements.

(c) and (d) should be fairly obvious inversions of (a) and (b) respectively.

The way you phrased the question is a bit confusing, so I'll just state how I think about the dot convention rule:

This is true only when comparing voltages to voltages - don't bring current into the mix. The phase relationship between voltage and current will depend on what else is attached to the transformer.

Also note that the instantaneous voltage is irrelevant - transformers only respond to time-varying voltages and currents, so it's best to think of any signal as a sine wave, not a voltage at a particular moment. If you need to focus on a particular moment, use dV/dt or di/dt.

An ideal 1:1 transformer acts the same as a pair of wires, except that input is isolated from output. so if you cover the in picture b you can see current in the top an bottom wires matches and that voltage across input and output matches.

You have to distinguish between a reference polarity or reference direction, which are arbitrary, and the numerical sign of the voltage or current, which depend on the chosen reference polarity/direction. It's easier to look at phasors (frequency domain) rather than the real instantaneous values (signals, time domain), but I'll use instantaneous quantities since your diagrams use them and you talked about instantaneous polarity.

[...] for example the equivalent circuit of the ideal transformer in figure(a) the instantaneous voltage polarity of the secondary is positive at the dot terminal,if we connect a load across the seconday terminal, isn't supposed that the current goes out from the dot to the load? or does that mean that the voltage and current of the secondary side are 180 degree out of phase?

With respect to phase angles, the transformer only relates the angles of the two currents, and the angles of the two voltages (for each pair, they're either in phase or 180° phase-shifted). For figure (a), just because the reference direction of \$i_2(t)\$ is entering the dotted terminal, it doesn't mean the actual current is entering the terminal for a given instant; you also need to consider the numerical sign at that instant (if it's positive, then the current is indeed entering, but if it's negative then the current is actually exiting positively). The equation \$ N_1/N_2 = v_1(t)/v_2(t) \$ says that the two voltages will be in phase; the equation \$ N_1/N_2 = - i_2(t)/i_1(t) \$ says that the two currents will have a phase shift of 180° for the given reference direction (both currents entering the dotted terminals). The equations don't say what will be the angle of the voltages or currents by themselves; in other words, if the phase of \$i_1(t)\$ is \$ \theta_{i1} \$, then the phase of \$i_2(t)\$ is \$ \theta_{i2} = \theta_{i1} \pm 180° \$; similarly, \$ \theta_{v2} = \theta_{v1} \$. This is what the transformer equation says regarding phase angles, however it doesn't indicate what's the numerical value of \$ \theta_{i1} \$ (and thus it doesn't indicate either the numerical value of \$ \theta_{i2} \$), therefore the transformer equation doesn't say whether the current in coil 2 is entering or exiting its dotted terminal. So, regarding your first question,

isn't supposed that the current goes out from the dot to the load?

the answer is no, in general the current can be exiting or entering the dotted terminal. Regarding your second question,

does that mean that the voltage and current of the secondary side are 180 degree out of phase?

Not the answer you're looking for? Browse other questions tagged transformer polarity or ask your own question.

7
Transformer primary and secondary voltage phase shift
0
Dynamics of ideal transformers
0
Confused about polarity of Transformer
0
Capacitor polarity confusion in a circuit
0
Dot convention meaning
1
Confusion - ideal transformer on load
0
Center tap transformer. Voltages 180 out of phase but what about direction of current in 2 parts?
0
How to connect the windings of a dual-winding transformer in series (dot convention)