How much open circuit voltage can a C.T. generate if burden is removed

The CT types I'm thinking of are those used for the general monitoring of household currents. Myth or truth, will a regular CT (in an otherwise normal and suitable current monitoring situation) generate thousands of volts on the secondary if the burden is removed?

A CT is a step up transformer and the biggest turns ratio I've come across is 5000:1 so potantially, with 200 mV AC on the input, the output could be a thousand volts. But how easy is it to generate 200 mV RMS at 50/60 Hz on one primary turn? The inductance of the short length of cable that passes through the core is going to be in the micro-henry range and, at 60 Hz, 10 uH has an inductive reactance of 3.8 milli ohms. That implies a current of about 53 A is needed. This is significantly above most household circuits of course.

For most small CTs (I'm thinking ones that are used for AC household current monitoring) if the burden is removed, the core is very likely to saturate and this means magnetization inductance falls down to tens or hundreds of nano henries. The knock on effect is that you might generate a few tens or maybe a hundred volts on the output.

So, is this an urban myth or can regular CTs used for monitoring household AC currents potentially produce thousands of volts when the burden is removed from the secondary?

I dug an odd toroidal transformer core out of my junkbox to do some quick sums. This one has an area 13x32 mm = 384mm2, and a mean diameter of 60mm, so 0.188m circumference. You could probably wind a transformer in the 80-100VA range on it. I have wound current transformers on similar cores.

What will a single turn of current carrying wire drive the field to, if there is no secondary current flowing, i.e. no burden resistor?

What to use for the permeability of iron? 2k is a minimum for typical transformer irons, but current transformers tend to be wound with high \$\mu\$ types to improve the accuracy, so perhaps 5k is a more reasonable figure. That means a flux of 0.033T per amp.

My shower takes 40 amps rms. If I put the kettle, toaster and the oven on at the same time the water heater is on, that comes to more than 40 amps. I only have an 80A company fuse, so I do think before putting the kettle on if there's someone in the shower!

1kV with 5000 turns and 'domestic' current levels, no problem

What happens if more primary current flows? I initially thought 'the core saturates, so limits the voltage'. But no. The core saturates, which flattens the sinusoidal core flux waveform into a more trapeziodal shape, increasing the rate of change through the zero crossings, which increases the output voltage.

I have seen 50,000:1 CTs before, I work in a power test lab. 5000:1 still seems rather high for the application you are talking about. At the test lab I work at and my previous company (transformer manufacturer) It was a safety policy to either take the CTs out of the circuit when not in use, or to short out the secondary terminals. Even if you are not generating thousands of volts, you could still generate dangerous voltages. The other problem you can run into is damaging the dielectric that is used to insulate the secondary windings. these are designed to withstand ranges of around 10v at the most. Putting even 30v on the secondary could cause it to flash over and ruin you CT.

How much open circuit voltage can a C.T. generate if burden is removed?

So, how do we determine the voltage across the primary? Well, if the core does not saturate, we can use the inductive reactance.

and, on the primary,

The peak voltage on the primary will be

The peak voltage on the secondary will be

It is quite possible that if the burden resistor is removed from a current transformer while the latter has a high power line through it, that the core will saturate. What happens if the core saturates?

It turns out, that one will get the same answer for the peak voltage (but not the average or rms voltages which will be lower). If the core saturates, there will be a period when the voltage across the primary (and consequently the voltage across the secondary) is less than what it would be if the core did not saturate. However, maximum voltage induced in either the primary or secondary will occur when the flux in the core is changing most rapidly. The flux changes most rapidly at the time it crosses 0. That is, the flux changes most rapidly at a time when the core is not in saturation. So, the peak rate of flux change is unaffected by core saturation (in a transformer fed by a sinusoidal current source). This is illustrated by the graph below which shows the relationship between a sine wave current applied to a saturating inductor, the flux, and the induced emf. 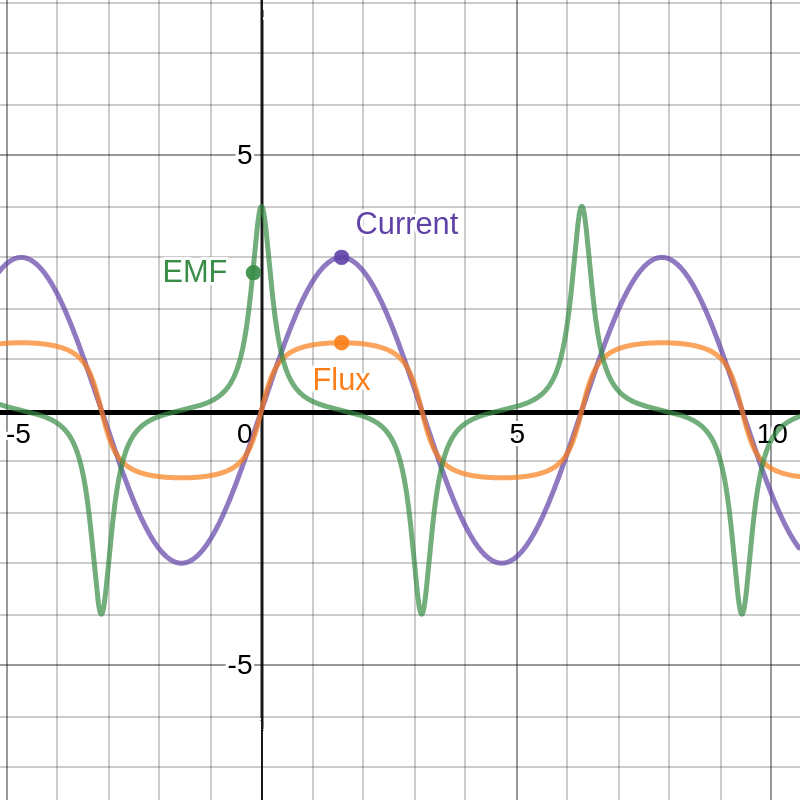 Not the answer you're looking for? Browse other questions tagged current safety current-transformer or ask your own question.

70
How much voltage/current is "dangerous"?
76
How much current can I draw from the Arduino's pins?
25
How much current can Solderless Breadboards handle?
0
How much amperage can pass through a current limiter
0
Solving Open Circuit Voltage and Short Circuit Current
0
Finding the open circuit voltage
1
Closed loop circuit vs open loop circuit can current flow?
0
How to find out how much voltage and current a soldering agent can handle
1
How much power can be drawn from a CT Clamp?