With PMOS and NMOS, one can deduce that it is off, if

Now my question rests on the dependency of these conditions. I know proving condition 1 automatically implies condition 2. But can the same be said for the reverse?

Going off of this, in CMOS logic, does the current not matter in determining whether the mosfet is on or off? Clarifying the conditions of CMOS logic and how it is different from just PMOS/NMOS logic would be really helpful.

I'm assuming you would relate this to the most basic forms of CMOS logic, the inverter: 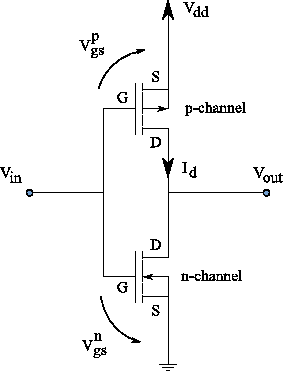 For the PMOS it is still common to also use \$Vgs > Vt\$ for the ON condition. But note that then the PMOS Vt would then be negative !

Condition 2 \$Id = 0\$ can also be achieved with both transistors OFF. So condition 2 does not always imply condition 1. But for the inverter powered with a sufficient Vdd (If Vdd = 0, that would also imply Id = 0) then either the NMOS or the PMOS transistor is ON (in a conductiong state). That is assuming Vin is either equal to 0 V or Vdd. (If Vin = roughly \$Vdd/2\$ then both transistors are conducting and Id would not be 0).

Id = 0 is not related to the state of the circuit. It is similar to the situation that a light switch can be ON or OFF, it does not mean a current has to flow. Removing the lightbulb (so no current can flow) does not prevent the switch from being in the ON or OFF position).

Likewise in an inverter depending on it's state either the NMOS or the PMOS is in a conducting state, that does not mean a current Id has to flow. This is the great benefit of CMOS logic, (almost) no current flows when the logic is in a static position.

Not the answer you're looking for? Browse other questions tagged cmos logic-gates nmos pmos or ask your own question.

1
How can PMOS eliminate body effect but NMOS doesn't?
3
CMOS technology, use a NMOS or PMOS as series switch?
0
Substrate Connection when driving a Bi-Directional Switch
0
NMOS and PMOS current sources
0
What will be this CMOS logic circuit's Truth Table?
1
PMOS and NMOS in cut-off
1
CMOS on breadboard - Which P & N type MOSFETs to get started?
1
PMOS carrying more current than NMOS?
2
Reverse polarity protection for a very low voltage devce
0
CMOS Inverter Circuit Analysis