What is wrong with this butterworth filter, how can it be improved?

Why does the attenuation reduce 110KHz and then become stable after 1MHz? 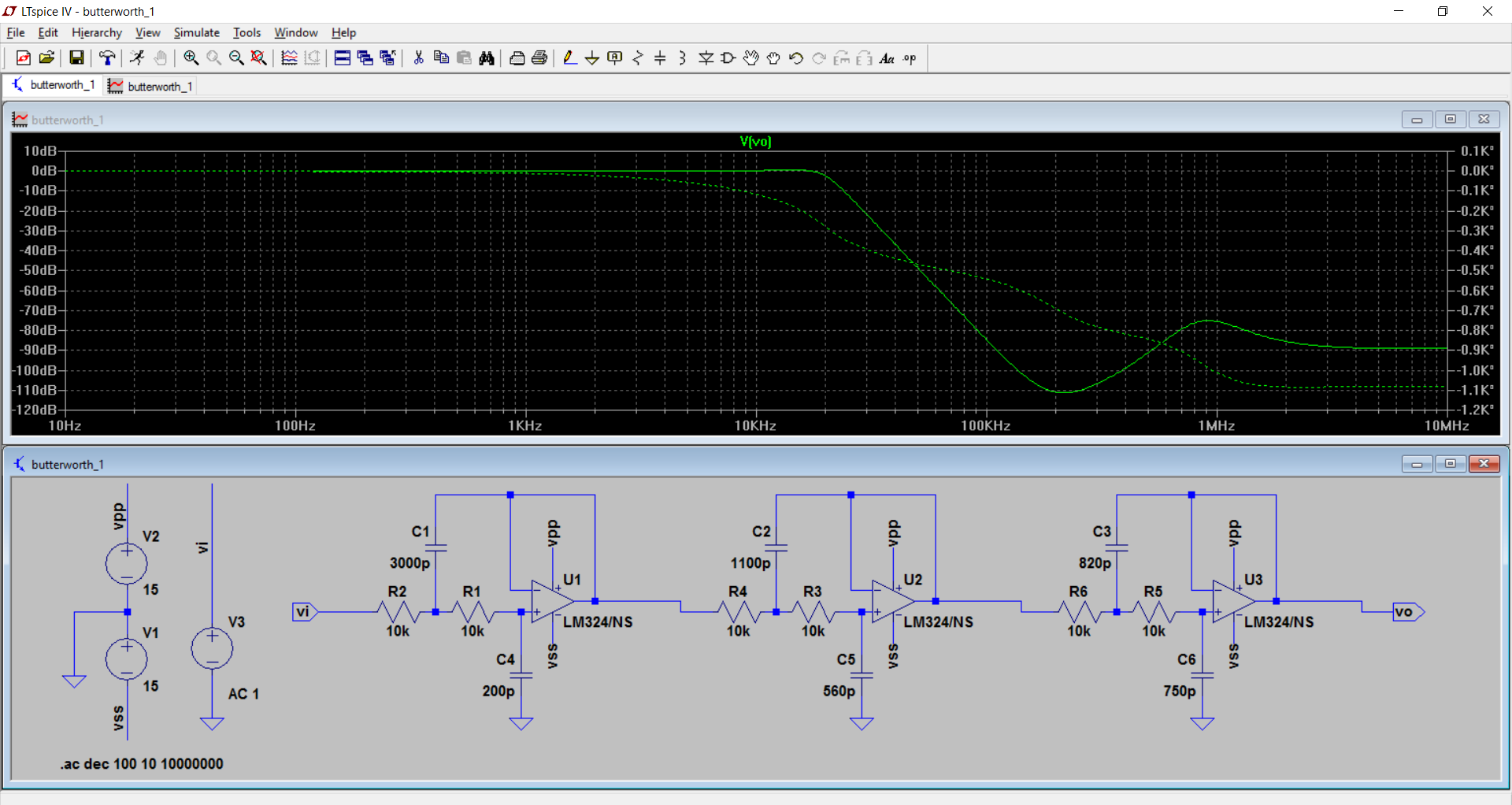 EDIT: Today I did some more simulation. I used 2 nonideal opamps and it gave me similar result. Then I used what I consider to be ideal op amp in LTSpice. The symbol is called "opamp" and needs a spice directive to be useable. The result is below: 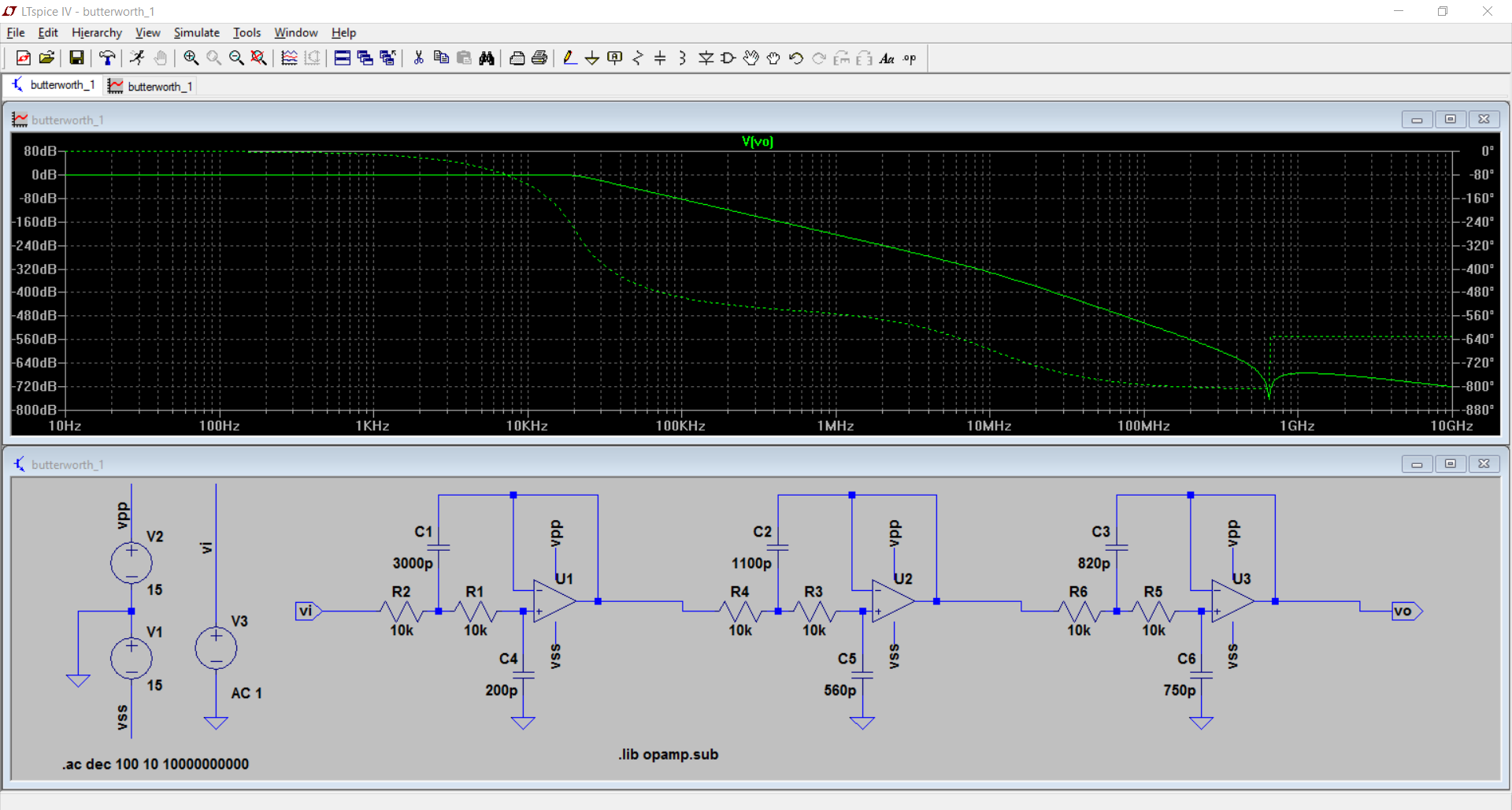 I initially thought that the ideal opamp does not suffer from the problem I saw with the real op amp. It is true that it does not. However, between 0.6GHz and 0.7GHz I notice a strange behaviour. This is different from what was seen earlier. 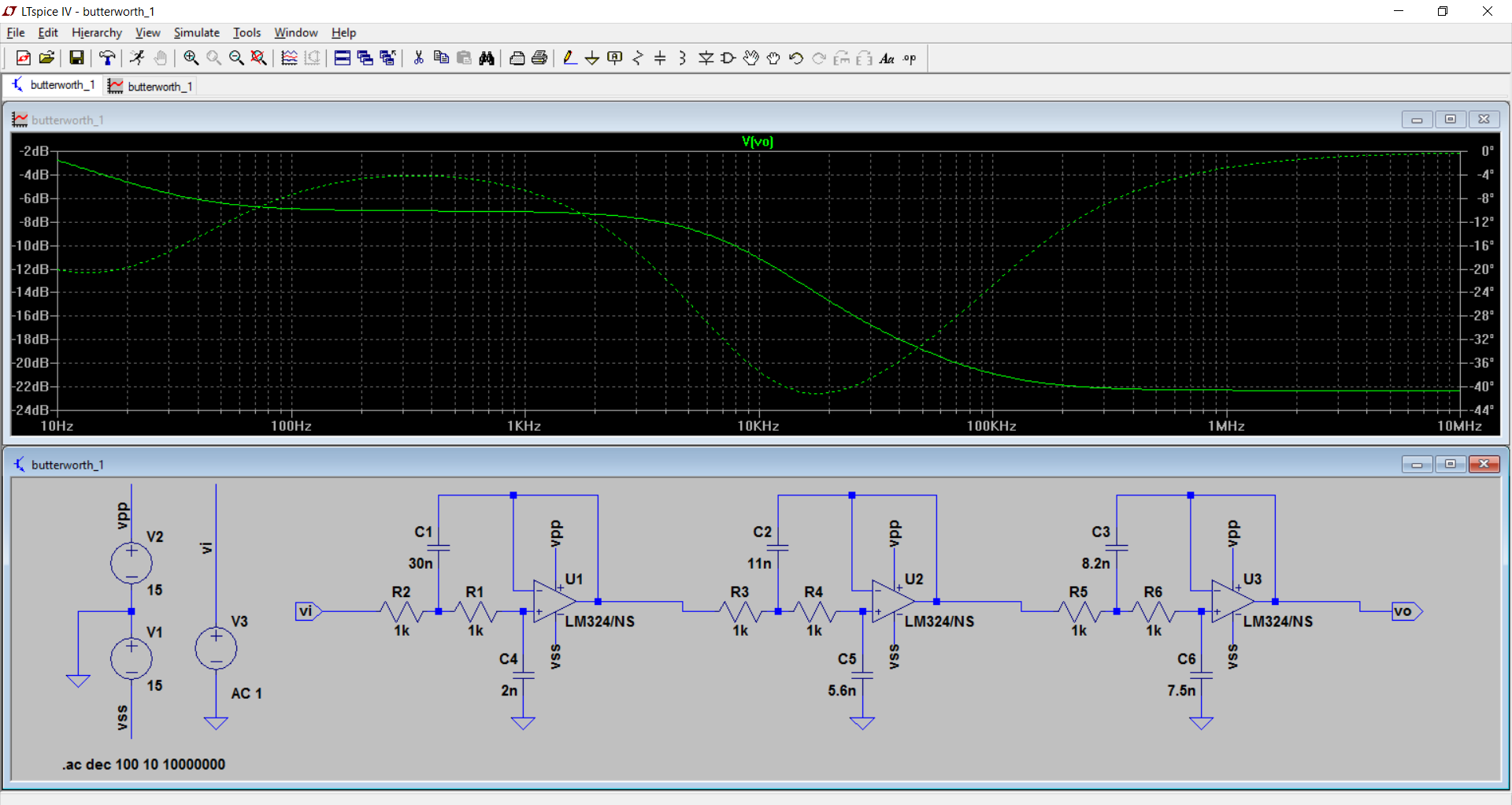 I have now scaled the values by 10 the other way, i.e make resistor bigger. 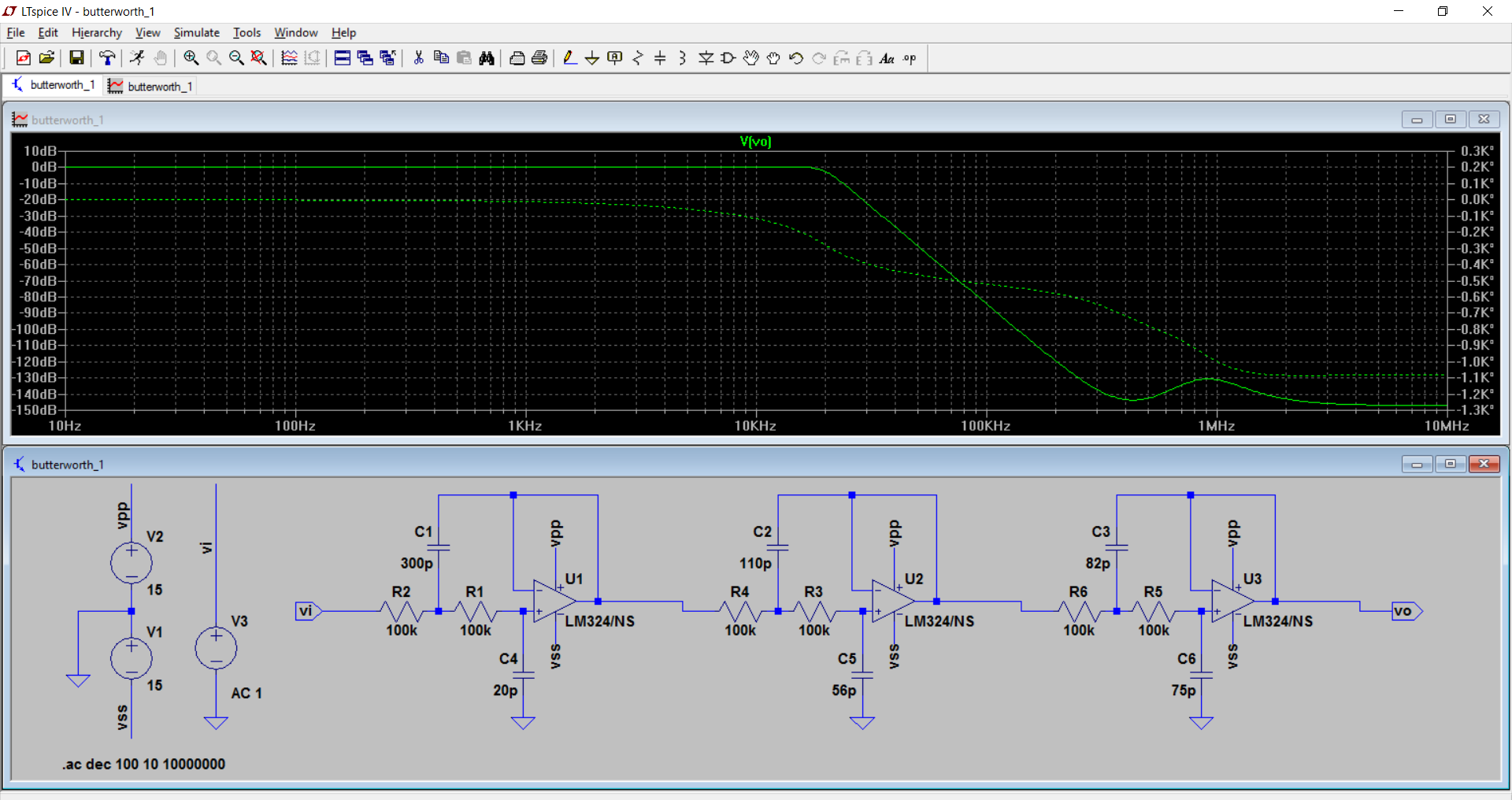 As requested by Guru I now have more graphs: 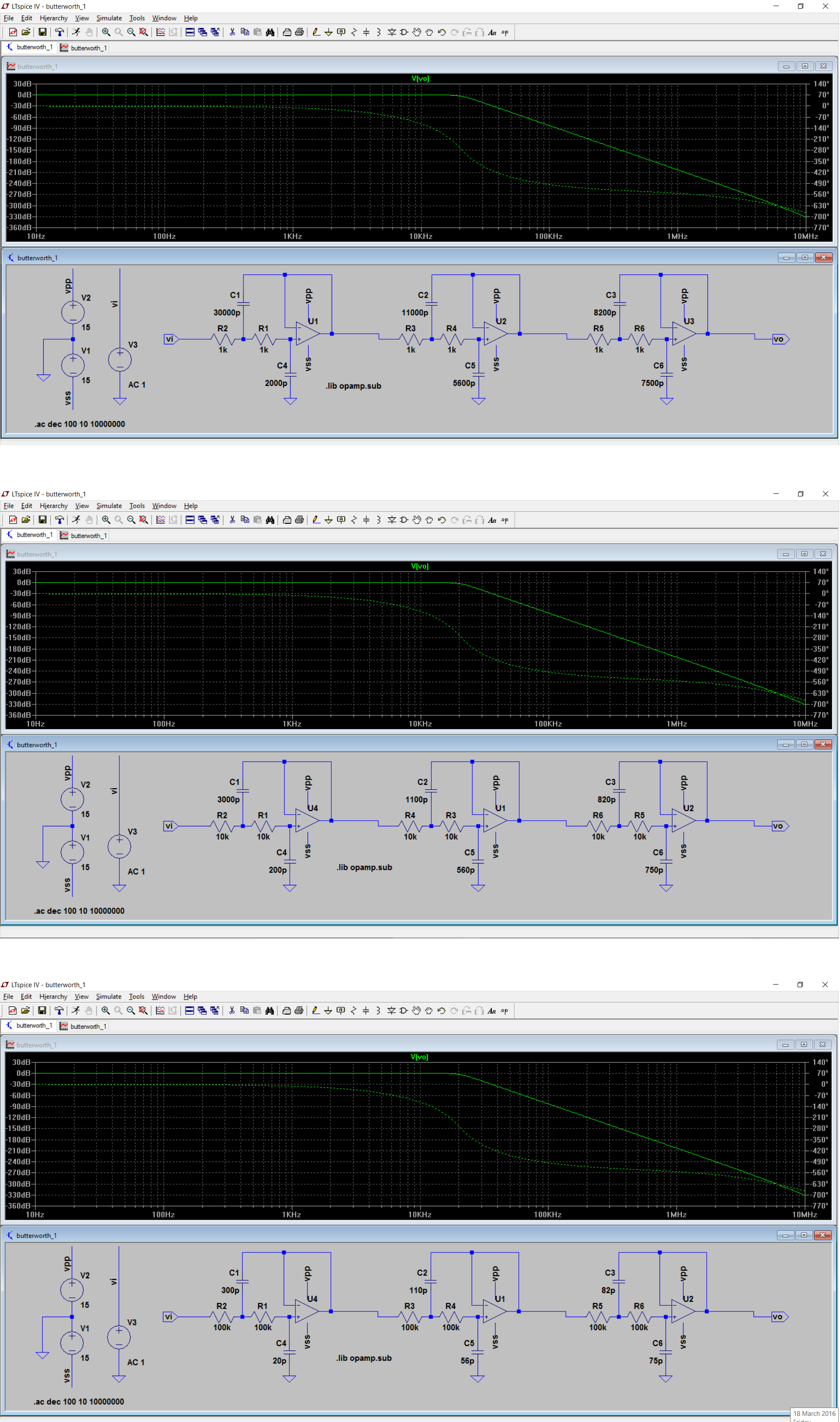 Plot of the original circuit with an extra RC at the end: 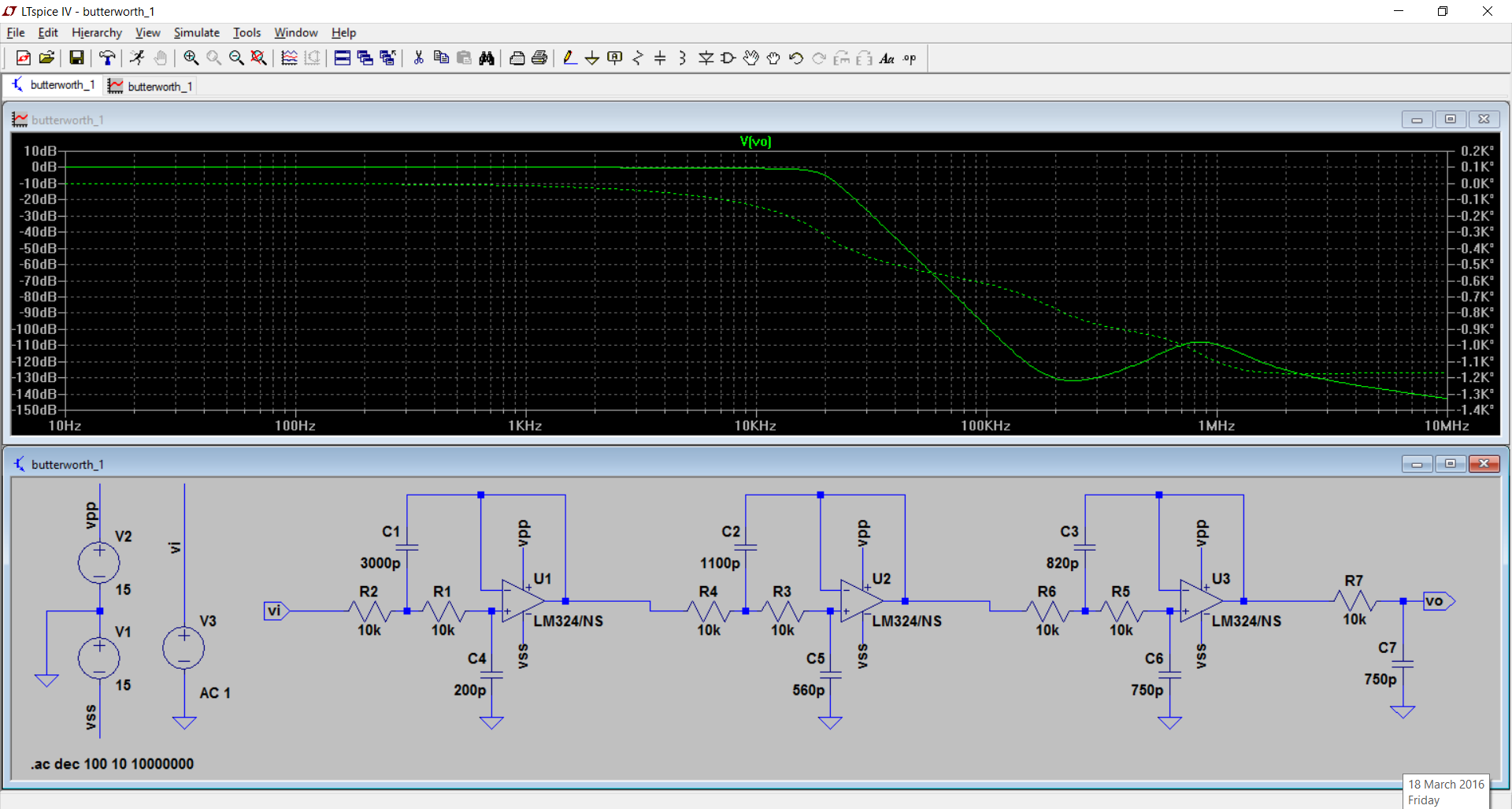 Plot with the OP275 as required by the Guru: 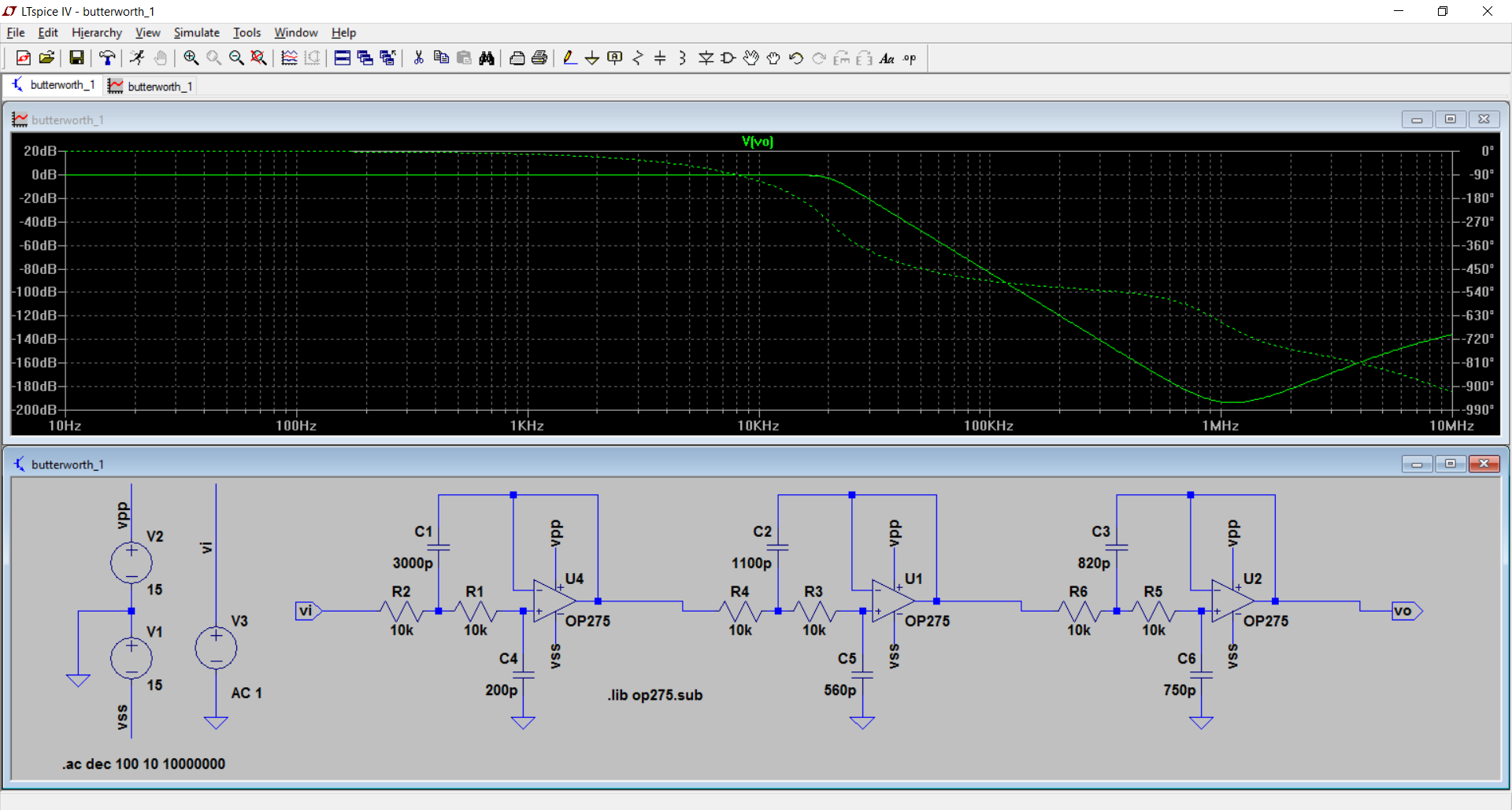 Finally plot of the original design but with buffer in the feedback loop: 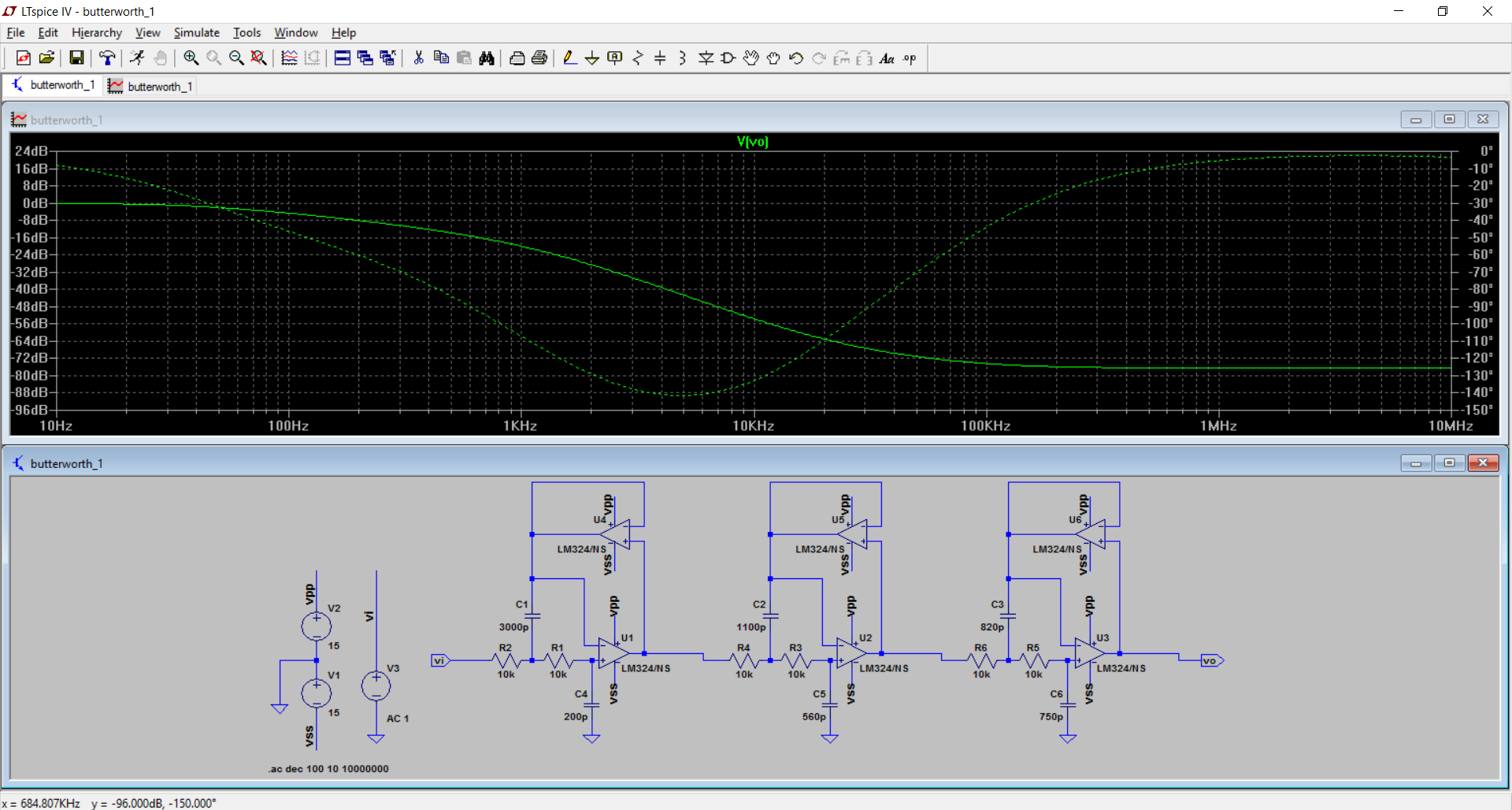 I am afraid, changing the opamp type will not help. The observed effect (less damping for rising frequencies) is the typical disadvantage of the lowpass Sallen-Key topology.

The reason is as follows: For rising frequencies the "classical" output signal from the opamp decreases (as desired) - however, at the same time there is a signal arriving at the output via the feedback capacitor (the signal bypasses the opamp). This signal produces an output voltage across the finite output impedance of the opamp (the output impedance even increases for rising frequencies). Hence, this unwanted signal dominates for high frequencies and limits the damping at a fixed value.

If you need more damping for very large frequencies the only solution is to use another filter topology (Sallen-Key/negative, multi-feedback MFB, GIC,..).

The same effect can be observed for the classical inverting Miller integrator (capacitor in the feedback path).

EDIT/COMMENT: Of course, this unwanted effect can be suppressed using another buffer amplifier within the positive feedback path (driving the feedback capacitor). However, this method requires another opamp.

EDIT2: Depending on your damping requirements - it could be sufficient to use another filter topology (MFB) for the last of the three filter stages only. As another alternative, you could add a passive RC lowpass and and a buffer stage after the third filter stage.

EDIT3: Here is a simple "trick" for improving the attenuation of the existing filter circuit in the stop band: Modify the impedance level of the parts used. For example: Increase all resistors by a factor k (for example: k=10) and reduce all capacitors by the same factor. Thus, all time constants and the whole filter respose remains unchanged, but the direct way to the opamp output now contains a larger resistors (R2, R4, R6) and a smaller capacitor. This should decrease the remaining voltages at the output for very large frequencies to a value of app. **r,out/(r,out+RX)**with RX=R2, R4, R6, respectively.

The standard Sallen-Key design assumes you use perfect opamps.

An LM324 is pretty slow as opamps go, I'm surprised it shows the filter working as well as it does.

Perform a few more simulations, changing the opamp type you use. Use a faster opamp, a slower one, and a perfect one. I don't know LTSpice specifically, but most simulators have a generic opamp that you can set the parameters of, or failing that just a voltage source block that you can set a high gain on.

What's happening is the unmodelled increasing phase shift of the amplifier is changing the ideal response of the filter components.

It's not really a good idea to try to 'predistort' the design of the Sallen-Key to compensate for the amplifier speed out to the problem frequency at 1MHz where the response lifts. Firstly, with these component values and amplifiers, the passband and transition band are correct. Secondly, the bandwidth limit of opamps is not well controlled, so may be a bit different with every new build.

There are two ways to improve the response of the filter. The first is to use faster opamps. However, this only tends to move the problem up in frequency rather than eliminate it totally. Using faster opamps than you need also causes other problems. Slow opamps let you get away with bad layout or decoupling, fast opamps punish you with instability.

The second way to handle a bump in the stopband, if the continuing deep attenuation of the stopband is important to you, is to use a low order passive 'roofing' filter, in your case cutting off around 300kHz.

EDIT well done for exploring the simulations with other amplifier choices.

1) With the ideal opamp. The passband and the transition band look pretty ideal.

What's that little wrinkle at 650MHz? Check out the amplitude, it's below the -640dB line. Now according to my sums, 64 bit reals run out of steam at 16 decimal digits ~ 320dB. I would have expected to see only rubbish and noise below -320dB. But perhaps the clue is in the fact that 640 = 2x 320. Does LTSpice use 128 bits reals? If so, I would not believe anything below -640dB, just as when programming, you would not expect an if(float==0.0) test to work consistently.

So what's going on at 650MHz? Spice doesn't/shouldn't have the precision to represent it, and the audio world cannot begin to use that apparent dynamic range. I think we can ignore it.

This illustrates both the strength and the weakness of using dB for the y axis. Strength - it allows you to represent colossal dynamic ranges compactly. Weakness - if you're not careful and keep your eye on what the figures mean, you can have your eye drawn to some irrelevant detail down in the noise.

2) With the increased impedance level.

Good catch from LvW, and his analysis that feedforward from the small capacitor was getting directly onto the output. This shows another non-ideality of opamps, their finite output impedance. The better result with the higher impedances shows that this is a contributing cause.

Here I disagree that a faster opamp would not help. Typically the output impedance of an opamp is maintained over a wider bandwidth with a faster opamp. While output impedance curves are rarely presented for low frequency LM324 type amplifiers, it's common for video class amplifiers, and they tend to be flat out to some surprisingly low frequency, then start rising at 6dB per octave, as the closed loop runs out of gain.

Of course a faster opamp doesn't cure the problem, it will still run out of a stiff output at some frequency, but it will push the problem to a higher frequency, which makes it easier for a roofing filter to handle.

Brian picked up the point that an odd order filter was beneficial because of the real pole. When you do a 3rd order Sallen-Key section, there is a real RC section at the input, which will provide a 6dB attenuation into the far stopband, independent of the opamp.

a) a plot on the same graph of the original 6th order and a new 7th order filter, using LM324 with the original impedance filter components. This is to see how well a single real RC improves the 1MHz lift.

b) a plot on the same graph the curve for LM324 with the higher impedance components, and the curve for the 'ideal' opamp, only out to 10MHz. This is to see how much there is still to gain from a better opamp, having made the improvement to the impedance level.

c) my 'go to' amplifier for audio work is the OP275. LTSpice should have a model for that. It would be interesting to see LM324 vs OP275 with original impedance components on the same graph.

Layout sketches - for communication only as I can't put sketches in comments, illustrating both how the Rs and Cs are configured a third order section, and how a buffer might be put in the feedback (something I would not suggest for a real design, only for an interesting experiment)

Not the answer you're looking for? Browse other questions tagged operational-amplifier low-pass active-filter or ask your own question.