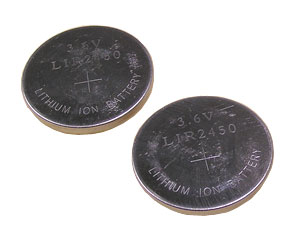 The battery is charged by the pull string. There is a switch which uses this battery to power three LEDS.

I want to use this battery to power something with a higher amperage rating (ideally a cell phone).

I am wondering first whether it's possible to connect these coin cell batteries in series to get a 3.6 V output @ 1080 mAh.

Next, would I have to charge them all individually in their respective pull string charger circuits and then connect the charged batteries to achieve the higher amperage?

Lastly, I wonder if I could replace the coin cells with another Li-ion battery that outputs 3.7 volts at 1000 mAh.

My guess is that that is a dumb question as both battery types require a different charging circuit, and that my best bet is to connect them after they're charged.

Hopefully someone can shed some light, thank you so much, M

The charger is potentially usable but it would take a considerable time to charge a 1000 mAh LiIon battery - probably 8+ hours - see below.

Based on measurements that I have made:

"Real world" hand driven charger: I experimented with a hand driven charger using a Fisher & Paykel "Smartdrive" washing machine motor. These would probably make about as good a hand powered alternator energy source as anything that could be built. Speed of operation lies in the optimum range for comfortable use, efficiency is reasonable, the annoying force and load fluctuations and noise produced by small geared units is wholly absent. There is a small amount of low speed "cogging" or salience at extremely low speeds but this is essentially unnoticeable in use. Saliency can be reduced by pole profile modifications (with a grinder!) if desired.

These are 3 phase brushless dc motors rated at hundreds of Watts input power as a motor or output power as an alternator at design speeds. When operated by hand power at speeds in the one to few revolutions per second speed range outputs of say 5 to 30 Watts is possible at voltages of maybe 5 to 20 volts. Vout varies with wiring configuration and speed and available power at a given speed can be increased by changing the ferrite magnets to higher flux rare earth magnets. This is unlikely to be worthwhile in hand powered applications.

A pull string unit will make less power than a hand crank due to the intermittent nature of the power input. The awkward arm angle during part of the stroke unless you fasten it somehow and position it optimally will not help.
I have not measured one but guestimate upper sensible continuous output at say 500 mw.

Controlling charging: If a "real" charger such as the F&P alternator based one was used a small battery could easily be destroyed. Typical consumer goods LiIon batteries intended for phones and similar are usually rated at from C/2 to 1C charge rates. ie a 1000 mAh battery at 1000 mA charge = 1C, and at 500 mAh charge = C/2. At 10 Watts the F&P charger would provide about 2.5A if the voltage was matched to the cell. In practice Vout would probably be in the 5 - 20 Volt range. Use of a properly designed charger using a buck converter and proper battery management would be essentially essential. An F&P alternator and properly designed charging unit would be able to charge a suitably specified 4.2V, 3000 mAh 18650 cell in about an hour, hand-energy-inputter willing.

You are unlikely to get overcharge with pull string charging and a 1000 mAh battery :-) - but the PV panel will charge the LiIon 1000 mAh fully if left long enough - which may take 1 to 2 weeks of all day sun based on what they say.

A LiIon battery MUST have its peak charge voltage limited to 4.2V or less.
4.1V is safer.
MUST!!!
If you do not do this the battery may die either with a whimper or with an enthusiastic fire show. REAL magic smoke.

There are other things you can do, but limiting Vmax is probably a very very good start in this case.

NEVER run a LiIon battery below about 3V when discharging.
Doing so may destroy it.
Slightly lower than that WILL destroy it.

If you can prevent it discharging below 3V it will help it live long, if not actually prospering.

Not the answer you're looking for? Browse other questions tagged charger lithium-ion coin-cell or ask your own question.

19
Pulse-powering heavy loads with a coin cell
3
Simplest possible circuit for charging a li-ion cell
10
Charging Li-ion batteries in parallel
1
Are there any high energy density (i.e. zinc-air or lithium-manganese dioxide) batteries without high internal resistance?
11
Why are 3.8V lithium-ion batteries used in mobile devices, rather than 3.6V or 3.7V batteries?
6
Coin cell battery recharging circuit for RTC backup power
1
Lithium Ion voltage during discharge
0
Using a battery as a voltage source in a DC DC converter to supply a second battery?
1
How to use CR2032 in parallel