While writing an answer about using multiple diodes connected to a single resistor, I stumbled upon a case about which I haven't read a lot: What happens when we set the resistor so that it sets the current to be within safe levels for a single diode and then connect several diodes in parallel to it?

Is there anything else that will happen? I've read the answers in this question and some of them mention oscillations, but don't elaborate on the topic.

No harm will be done, but this result will seldom be useful.

One possible use is for eg a backlight where you only need as much light as one LED would make but you want it more widely distributed physically than you can achieve with only one LED. I have actually done this BUT it is an unusual application.

The forward voltages will match instantaneously "by definition" and will stay matched as they are connected together electrically. What WILL vary is common Vf and the current that each LED takes. The LED that takes the most current will heat the most (subject to absence of differing ventillation and heatsinking etc). With 10 LEDs the effect of variable individual cooling could have a significant effect on results.

For practical purposes the LEDs will settle down with currents about equal to the currents that they initially drew at the group Vf. See "Oscillations?:" below for comment on why the result is somewhat more complex in reality - BUT that you will not notice this.

The above are the main things that will happen.

Luminous efficiency increases slightly with decreasing current. ie if you run 1 LED at x mA or 2 LEDs at x/2 mA each you will get slightly more light from the two LEDs.

Lifetime to say 70% of initial output will increase significantly if you share X mA among 2 LEDs and very very very much so if you share it amongst 10 LEDs.
This is based both on the current density per LED and the likely reduced die temperature. These are largely independent effects. 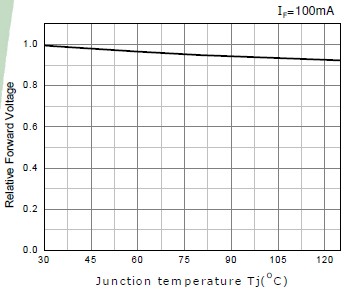 Nothing will get hurt, but the brightness of each LED won't be the same to the extent each part has a little different characteristics. Also, with several LEDs in parallel and the resistor sized for maximum current thru one LED, the average current per LED will be 1/nLEDs the maximum it could be. For example with 20mA LEDs and 4 in parallel, even if all got equal current they'd each be getting only 5mA.

Resistors are cheap and small. Except in very high volume applications it's not worth trying to play games like this.

Not the answer you're looking for? Browse other questions tagged led resistors current parallel or ask your own question.