Why does current flow in circuit when dc voltage is applied to inductor?

I read in my textbook that when dc voltage source like a battery is connected to inductor,it develops an emf which opposes the increase of current in the circuit.On applying kirchoff's law in the loop,I can say that the back emf developed in inductor is equal to voltage of the battery ,since there is no other element in circuit where voltage drop can take place.

In your question, you say 'it develops an EMF which opposes the increase of current'. That's not quite correct.

A better way of putting it would be 'when a voltage is applied to an inductor, the inductor develops an EMF which is due to the increase of current.'

We notice that if we connect a voltage to an inductor, then after some time t, a current is flowing, given by the equation \$I_t = \dfrac{Vt}{L}\$. This is the experimental observation. It is this observation that we have to work from, to derive the rules.

We could say the change in current causes the voltage, or the voltage causes the change in current. Neither statement is 'more true' than the other. One statement may be more useful than the other, depending on what we are trying to analyse. If we are looking at a boost converter for instance, the 'voltage causes current change' is better for the inductor charge up phase, the 'change of current causes voltage' is better for the inductor run down phase.

If we start with the rules and try to work out what is happening, we will come up short, because physics only describes what happens, not why.

We know enough about what is going on with electrical phenomena to know that we don't understand it truly at a level where we can say this or that causes this or that to happen. Voltage, for instance, is a measure of the energy it takes to move charge around. To say then that voltage 'causes' something is to put the cart before the horse. All we can say is that when this happens, say current increases through an inductor, we also notice that we can measure that, which is a voltage between the terminals. Don't try to overthink electrical causes and effects.

You might like to look up Zeno's Arrow Paradox, to see what happens when you try to overthink mechanics.

Good morning! Look, your analizis is correct, but only for the inicial instant, called transient (in that moment, the inductor will opose to the current change and generate a voltage Vl=L*(di/dt)). After that, the circuit will get to the permanent state (in dc, the inductor is just a wire in permanent state). You can see this, by solvig the circuit: 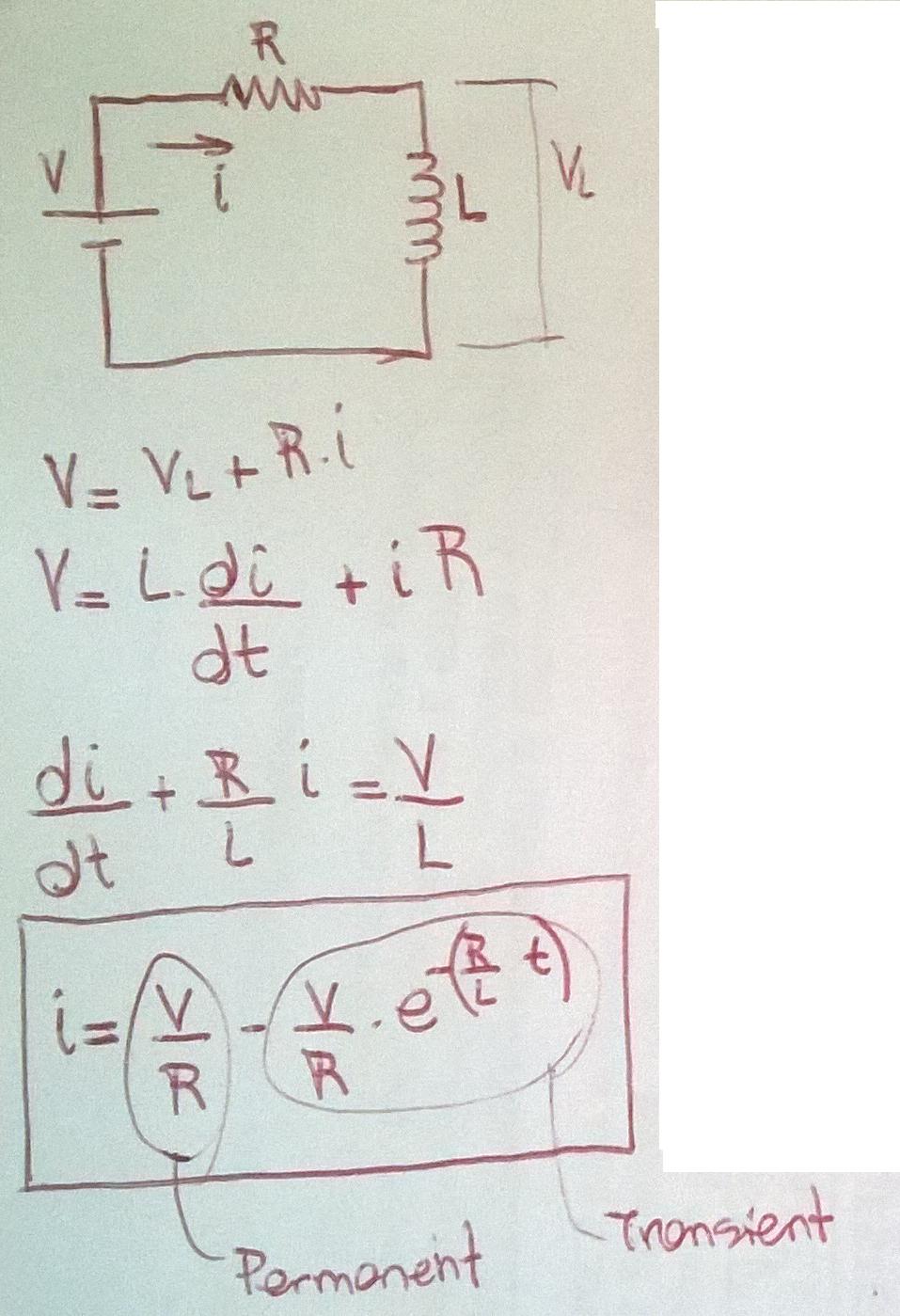 In your case, R is the resistences of the wires and inductor.

i=0, so, if there is no current flowing, it means that the voltage induced in the inductor plus the voltage drop in the wires is equal to the voltage supply.

Have a good day!

Not the answer you're looking for? Browse other questions tagged circuit-analysis inductor inductance or ask your own question.

1
What mechanism happens inside an inductor from the point when potential difference is applied?
0
How does an inductor generate back emf equal to a source driving it?
0
Is Faraday's Law not working?
0
Capacitor and inductor power factor
0
What happens if I interchange the position of the inductor and capacitor in this circuit?
2
If induced voltage (back-emf) is equal and opposite to applied voltage, what drives the current?
0
Why is lenz law not applied in this crcuit analysis
1
If the self-induced EMF in an inductor is 180° out of phase with source voltage, shouldn't they cancel out and net voltage should become zero?
0
Confusion Between Dual Capacitor/Inductor Circuits