How can I reproduce ambient EM fields inside a Faraday enclosure?

Our current plan is to link 2 broad spectrum antennas outside the Faraday tent with a matched pair of antennas inside the tent. We'd have a relay switch in the cable to control the on/off function, and a preamp to slightly boost the signal. I'm not convinced this will work though.

What would you guys recommend? It doesn't have to be a perfect replication, just "good enough." We're most interested in reproducing the 25MHz-3GHz range.

Accurately reproducing ambient EM fields inside a Faraday tent is going to be very difficult. I know you say you don't need perfection, but using a couple of antennas is probably going to be way off.

An alternative and likely much easier method would be to have two tents, one a Faraday tent and the other similar looking but not - you could cover both in lightweight fabric to hide the distinctive foil/mesh. Move the subject between tests. Or swap the foil door for a fabric one, and use a divider inside the tent so the subject can't see which is which.

If you are trying to reproduce the fields electronically, you'll want several broad-band antennas to cover the full range and you'll want to measure inside and out with a spectrum analyser to verify you've got it right. Some kind of RF graphic equaliser made from amplifiers and notch filters might help tune the system and get them the same.

You could make two panels - one fake (make of plastic or wood) and one real (with a conductive mesh inside). During the experiment, you'd close one panel and leave the other one open. Your subjects won't know whether the panel which is currently closed protects them from ambient EM or not.

My intial thought was: No way! Antennas aren't going to be broadband enough.

Then I had a look at some antennas made for emissions testing, and got a big surprise.

Take this one as an example: 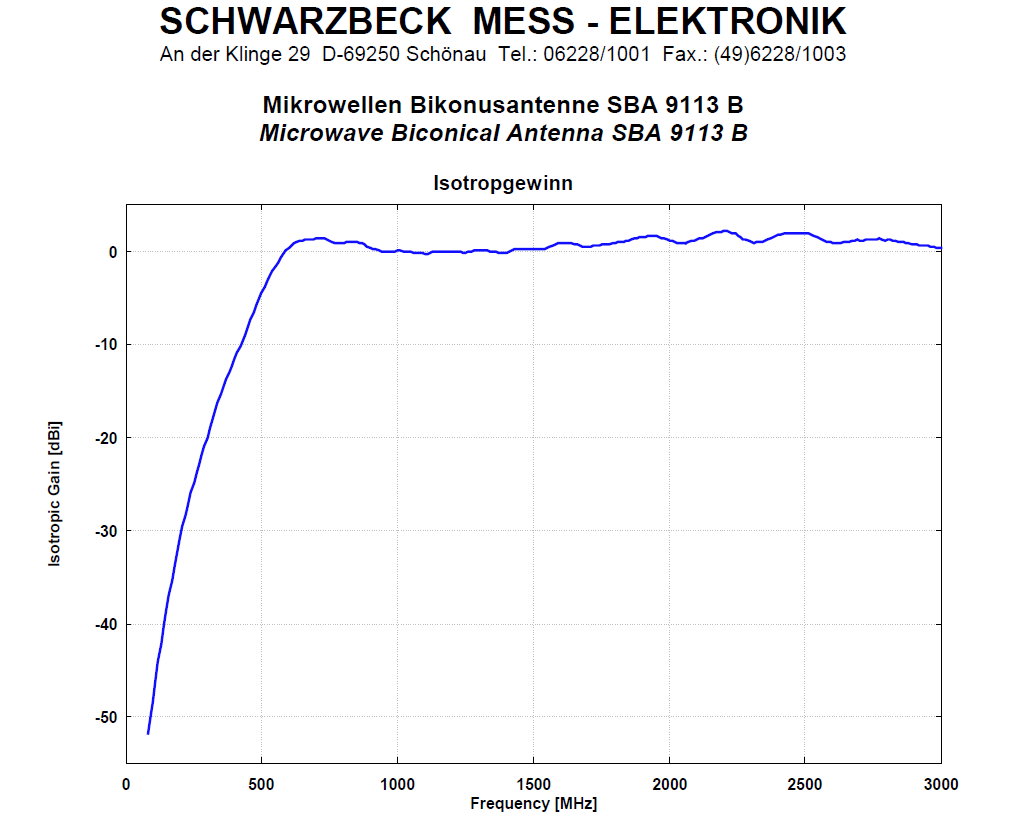 It has a damned near flat response from about 600MHz to 3GHz.

If you combine that with another that covers from 25MHz upto 600MHz, then you'd have it made.

I wouldn't bother with combining them into one RF cable - you would need RF filters to combine them on the outside and another set of filters to separate them on the inside.

Just run a cable for each pair, and switch both pairs on or off as needed - that will be cheaper and easier than anything else electronic. Dmitry's suggestion of a removeable panel in the cage would probably still be cheaper.

You might need a small amplifier between the ends of each pair to make up for losses in the cables, or maybe not.

You will need to measure the ambient field outside with a broadband antenna (probably twice, low and high band) to verify the levels. If it is too low inside then you need to add an amplifier to each pair.

You will need an RF analyzer to make the comparisons, and you'll probably want to include that in whatever paper you write as proof of how closely you matched the inside and outside RF levels and at what frequencies.

Not the answer you're looking for? Browse other questions tagged rf antenna transmitter spectrum or ask your own question.

2
How short can an RF transmission line be?
0
Can we capture and reproduce the bluetooth signals
5
how to reproduce a matching network of a vendor
2
Can 2.4GHz antenna radiate through a small enough enclosure opening?
0
GSM antenna inside metalic enclosure
0
How can you increase an antenna's range?
0
Faraday cage with a RF WIFI router inside - does the electricity “evaporate”?
18
Wouldn't putting an electronic key inside a small Faraday cage render it completely useless?