Below is a boost converter with its inductor current waveform operating in DCM. The voltage conversion ratio of the converter is as follows:

where V and Vg are output and input voltage respectively.

From the formula we see that there are two ways to increase the conversion ratio:

This makes sense because the longer the D1 the more energy is stored in the inductor in the time period. 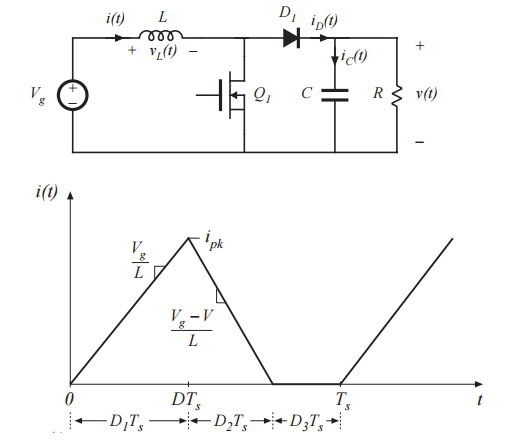 When D2 is decreased, how does it affect output voltage intuitively or physically?

You have cause and effect muddled up.

In discontinuous mode the time period D2 is determined by the load resistor and output capacitor. A lower time period for D2 means that the inductor is dumping its energy into the C and R much more quickly. Because V = L di/dt, if the rate (di/dt) is bigger, then the terminal voltage produced by the inductor is bigger hence more voltage.

Think about the extreme situation where C is very small and R is open circuit. During the time period D1 energy is stored in the inductor and as soon as the switch (Q1) opens, that energy produces a back emf that charges the very small value of capacitor up to some ridiculously high voltage that will likely destroy Q1. In this scenario D2 would be extremely short.

So, D2 getting smaller is the "effect" and not the cause - the cause is increasing the load resistor and/or decreasing output capacitance.

The thing to recognize is that you don't get to make the above choices without changing something else in the circuit. With D1 and \$V_g\$ held constant, the power input remains the same. So the only way you can decrease D2 is to increase the resistance R (i.e. reducing the load) such that the output voltage V rises which gives you a steeper falling inductor output current slope.

Not the answer you're looking for? Browse other questions tagged dc-dc-converter boost converter energy conversion or ask your own question.