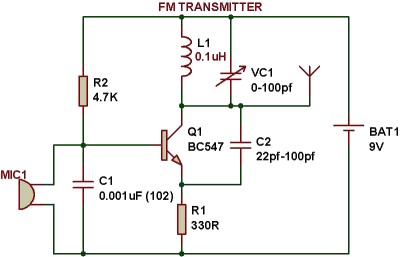 Can somebody help how message signal (words spoken near microphone) is modulated using LC circuit and how lc circuit oscillates at particular frequency by applying dc voltage. In the below circuit l1 is 0.1 uH and capacitor is vc10-100 pf.

Andy is correct but perhaps it would be easier to look at a picture of what happens. 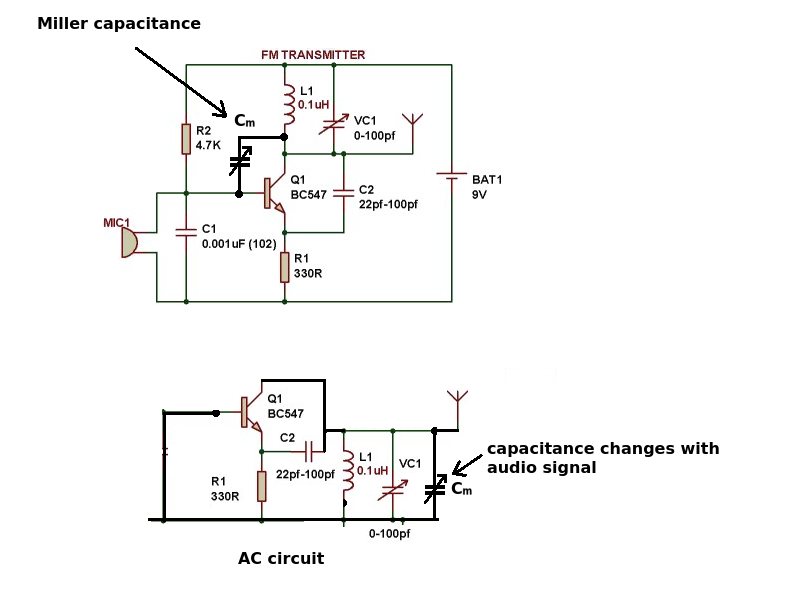 What you don't see in the circuit diagram is the collector-base 'capacitor' which varies according to the audio input signal. This effect is multiplied by the transistor (in the old days this effect was first seen in valves). The change in capacitance follows the audio signal.

In the second diagram we re-arrange the circuit to look at the equivalent AC circuit. C1 shorts out the base and MIC1 to ground and of course the positive and negative rails (to AC) are the same connection. This leaves the miller capacitance in parallel with the tank circuit. Changes in the miller capacitance (following the audio signal) change the resonant frequency of the tank circuit.

This isn't a particularly good circuit (linear, well behaved etc.) but it works for a simple FM bug.

• A condenser microphone is used to accept the sound signals. Inside the mic, a capacitive sensor diaphragm is present. It vibrates according to the air pressure changes and generates AC signals.

• The inductor L1 and variable capacitor (trimmer) forms an oscillating tank circuit along with the transistor BC547. It is the common NPN transistor used for general purpose amplifications.

• As long as the current exists across the inductor coil L1 and the variable capacitor, the tank circuit will oscillate at the resonant carrier frequency for FM modulation. Capacitor C2 acts as a negative feedback to the oscillating tank circuit.

• Every FM transmitter circuit requires an oscillator part to generate the radio Frequency (RF) carrier waves. The name ‘Tank’ circuit is derived from the capacity of the LC circuit to store energy for oscillations.

• The input audio signal from the mic is fed to the base of transistor which modulates the LC tank circuit carrier frequency in FM format.

• The variable capacitor is used to change the resonant frequency for fine adjustment to the FM frequency band.

• The modulated signal from the antenna is radiated as radio waves at FM frequency band. Antenna is nothing but a simple copper wire of 20 cm long and 24 gauge.

• The length of the antenna is very significant in the FM transmitter circuit. Here you can use a 25-27 inches long copper wire as antenna.

Not the answer you're looking for? Browse other questions tagged communication frequency modulation passive-networks or ask your own question.