How to choose voltage divider resistors for correct biasing in emitter follower circuit?

One simple rule are presented in many sources that I read (for example, Art of Electronics). This rule tells me that I have to choose resistors (R1 and R2) to meet the condition: (R1 || R2) << h21e*Re. But I don't understand the reasons for it. I read that emitter follower are available for low-resistance load (this is not clear for me). 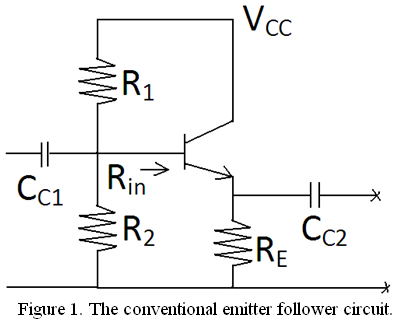 The current drawn by the base is dependent on the transistor parameter hfe (which varies greatly from one part to another of the same type, and also with temoerature etc). The base current will be the emitter current (emitter voltage divided by Re) divided by the hfe.

The source (Thevenin equivalent) resistance looking into the divider is R1||R2.

So they are saying that the voltage drop at the base due to the base current should be small in relation to the supply voltage. That way, hfe can vary over a wide range with little effect on the bias.

The explanation behind this requirement is the fact that the transistor acts as a voltage-controlled current source. (I know that in some books it is described in a simplified manner as current-controlled, but that`s not true and cannot explain the mentioned - and other - requirements).

For common-emitter configurations, it is the task of the emitter resistor RE to provide DC stabilization of the operating point. For this purpose an unwanted current increase d(IE) produces a corresponding voltage increase d(VE) at the emitter node which reduces the VBE=VB-VE voltage correspondingly. As a result - the current IE comes back nearly to its original value.

For the shown circuit (emitter follower) the resistor RE does the same job - although it provides - at the same time - the output signal.

However, this current-controlled voltage feedback is effective only if the voltage VB at the base node is kept constant. For this reason, the resistive level of the base voltage divider should be as low as possible (in order to produce a "stiff" bias voltage VB, independent on possible IB variations). As a minimum requirement, it must be much lower than the load resistance for this voltage divider. Because the effective emitter resistance - as seen from the base node - is h21*RE (due to the current IE=h21*IB) we arrive at the requirement R1||R2 much smaller than h21*RE.

However, we have to watch the resulting input impedance (should not be too low) and the power consumption of the whole circuit. Hence, a trade-off is always necessary between "good stabilization" (low value of R1||R2) and the input impedance (R1||R2 not too low). In most cases, this trade-off results in the following rule of thumb for the current I1 through R1: I1~(6...10)IB.

Comment: Both equations for R1 and R2 show an interesting and important property of the circuit: We do not know the "exact" value for VBE which gives the desired quiescent current IE. However, it does not matter too much if we assume VBE=0.65V or VBE=0.7V because VBE appears together with IE * RE (normally, several volts) in the equations (VB=VBE+IE*RE). Hence, the influence of the actual VBE value is reduced due to the feedback caused by RE.

Not the answer you're looking for? Browse other questions tagged bias emitter-follower or ask your own question.