Solving a circuit containing a resistor and inductor in parallel

I am working on a problem involving a resistor and inductor in parallel with eachother - I am trying to work out the voltage across the inductor as a function of time. It is clear to me that I will need a formula for 0 < t < 1ms and one for t > 1ms (Because the switch is closed then opened again) however I am really struggling to get my head around how I will work this out. If someone would be kind enough to point out the logical steps for this problem it would be much appreciated - I am wondering if I need to work out a thevenins equivalent circuit then try to solve, however when I attempt this I find the resistance would change with time which wasnt helpful in solving. I have tried my textbooks and google but I couldn't find a worked solution or notes on how to solve such a circuit. Many thanks! 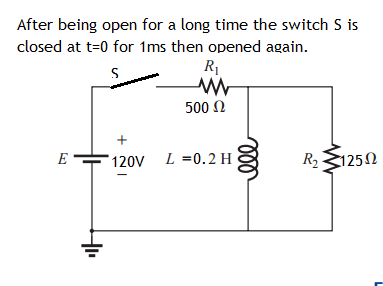 There are three stages to consider (I will assume all variables use si units).

The voltage and current in the inductor are zero.

We can replace the voltage source and two resistors with a thevin equivilent circuit. This works out to a 24V supply with a 100 ohm series resistance. We now have a series LR circuit supplied by a 24V supply with zero current at t=0

We could solve the series LR circuit from first principles but I just went and looked it up on google and found http://www.electronics-tutorials.ws/inductor/lr-circuits.html . This tells me that the equation for this case is.

Where I is the current in the indctor, L is the inductance and V and R are the 24V and 100 ohm we got from our thevinin calculation above.

Since it was left open for "a long time", then its safe to assume that the inductor has been completely drained of energy. So \$V_L = 0\$.

Taking the Laplace transform of the components and simplifying (as a voltage divider):

The inductor drains all its stored energy through the resistor using the standard equation.

Not the answer you're looking for? Browse other questions tagged resistors inductor or ask your own question.