Current flow intuition in a circuit

I am very confused as to why current changes as resistance is added. Where does rest of the current go?

Let's say I have 100V voltage source. Which by chance produce 10A . But the light bulb can only handle 10mA. So I add resistance in between thus decreasing the voltage via V=iR. Because voltage is lowered, current decreases. But 10A produced by 100V does not match the incoming current of lowered current. Where does rest of the 9.990A go?

Correction: If voltage source is current source that produces 10A constantly 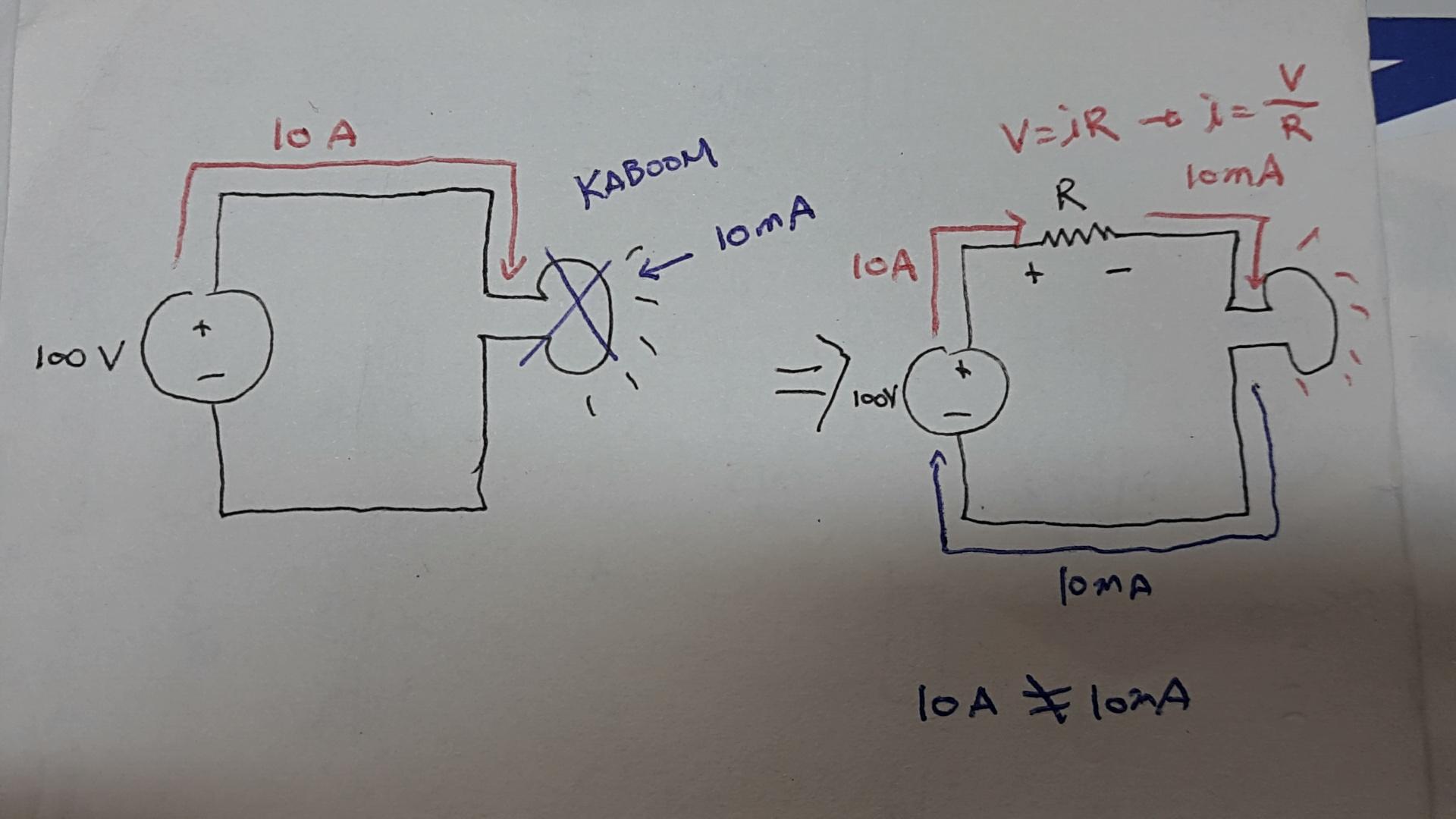 A 100V power supply doesn't produce current. It produces voltage. The 10-amps you mention? It never happens. That's not how circuits work. (Well, maybe we'd see about 300mA for a nanosecond or less, but then it drops to 10mA.) But for intuitive explanation we need clear wording rather than equations. A mostly math-free description.

If we rigidly use the correct terms from our physics classes, then much of the confusion may vanish.

For example, "current" never flows, only charges flow. Yes, the motion of charges is called "current." It can clarify things if we always speak of "charge-flow" rather than current. (Analogy, what moves through the atmosphere, wind? Wind blows here, wind blows there? Huh, I thought it was called "air." To keep our weather-reports more professional, we'll ban the word 'wind.' Always instead say 'air-motion.')

So, these charge-flows (currents) found inside of circuits can appear and vanish. But this only happens because the charges already inside the conductors are able to start flowing. Or halt. Or wiggle back and forth, if AC.

The key point is that the wires are already packed full of enormous amounts of charge. When the wires' own charges are forced to move, an electric current appears. Another point: high current equals fast charge flow, while low current is slow flow. Zero current is when charges halt in place. The charges are always there, but the charge-flow can appear and vanish.

The 100V DC supply is not a source of the charges which flow.

Ask yourself this: where are the charges which flow in conductors? Answer: they're everywhere inside the conductors, always, even when the circuit has been turned off and disassembled. The wires are full of charges, but so is the battery, and so is the light bulb. (Definition: "conductor" is any material which contains mobile charges.) So, a closed circuit acts a lot like a wheel, or like a drive belt, or like a loop of pipe filled with water, no bubbles allowed. The entire ring of charges can move within the wire. Charge-flows in circuits are closed-loop flows.

If your 100V supply is connected in the circuit, it causes all the charges in the entire circuit to start moving. And they all must move as a unit, since we're not allowed to build up charge anywhere in the loop. (That's the "charge conservation" rule. Charge is only allowed to enter a conductor if other charge is leaving at the same time.)

So, we can't have 10A charge flowing into one side of a resistor while 10mA comes out the other side. For each component, and for DC, the charge-flow into one end is always the same as the charge-flow out of the other end. This applies to resistors, but also to batteries, capacitors, coils, etc. The value of current inside the entire loop must always be the same. It can all be 10A, or all be 10mA.

Resistors? That goes back to the wheel analogy. A resistor is much like sliding friction, like your thumb rubbing on the moving charges. Your thumb gets hot! The charges inside the resistor will only start flowing if a voltage-force is being applied to the resistor, otherwise the friction will halt the flow. And, the larger the voltage applied across the resistor, the faster the flow (the higher the current.) Or, if the voltage-force is being kept constant, as when a single resistor is connected across a battery, then the larger the resistance, the slower the flow. This is just Ohm's law, I=V/R, where higher charge-flow is the result of larger volts, or smaller ohms. Ohm's law says "the harder you push, the faster the flow."

The 100V supply is like a driving force; a constant lengthwise pressure which causes the charges inside the entire circuit to rotate along through the loop. Break the circuit and the voltage-force is still there; it's just that an open switch acts like a brake; an infinite friction. Note that the path for charge-flow is through the power supply and back out again. The 100V supply is like a zero-ohm resistor, but also is like a drive-force which makes charges flow. It's a low-friction, constant-pressure charge-pump.

Back to your original question. If we suddenly connect a 10K-ohm light bulb to a 100V power supply, then the power supply applies voltage-pressure to the loop of charges. The friction of the light bulb only allows the charges to speed up until they're flowing at a rate of 10mA. The speeding-up process takes place briefly, over less than a nanosecond. So basically the 100V-supply can "feel" the resistor out there, just as you can feel the friction when you try rotating a steel shaft by hand, or cranking the drive-wheel of a conveyor belt.

Better question: what if a circuit is a million miles long, with a 10mA bulb at the end, and then we suddenly hook up a power supply? [edit: use ideal zero-ohm wire!]

This is a very common misunderstanding of the way current is delivered.

Your 100V source does not produce 10A. It is capable of producing up to 10A, but it will only deliver as much current as determined by the resistance in the circuit.

Such a good answer from wbeaty....nevertheless, I like to add another one which is based on some fundamental electrical rules. As we all know - the current in a closed current loop is determined by the driving voltage and the loop resistance (Ohm`s law). But this is only the RESULT of some considerations and not yet an EXPLANATION.

1.) Question: What causes the movement of charged carriers (electrons) in a resistance? Answer: A mechanical force F=E * q caused by an electrical field E within the body of the resistor. For the following, it is helpful to think just of a piece of resistive wire with a length L and the cross-sectional area A.

2.) The electrical field within this piece of wire is defined as applied "voltage V divided by the length L of the field": E=V/L.

3.) Now the material of the wire comes into play. The number and the mobility of free electrons (available to form a current) are characterized by a factor κ which is the "specific conductivity" of the material. With this factor we define a quantity called "current density" S=κE. This parameter S is a quantitative measure of the electrons ability to move.

4.) If we multiply the current density S with the real cross-sectional area A of the wire, we get a quantity called "electrical current": I=κ*E * A.

8
Ripple current in a linear power supply transformer
1
Difference between current and power
0
Current decrease in a lamp due to the change in scale of an analog ammeter
1
Heat and small appliances
0
Confusion about Ohm's law and electrical power (basics of electrical engineering)..?