How do I trigger a fans function after a setpoint temperature is reached? I want to avoid using a PID Controller, and my heating element will be external of the circuit. Once the fan cools the thermister back to regulation, it should turn off. I have a fan that operates at 24VDC(full speed). Thanks a lot

This circuit looks like it would do exactly what you want. BUT it may not, as we don't yet know exactly what you want. This shows a 12V fan but 24V would work equally well. This use a relay to turn the fan on and off but you could connect it in the transistor collector if the transistor was suitable. As you have not told us the fan power or current rating we can't be sure about the transistor. That circuit is from here but they stole it from somewhere else to get people to look at heir ads so ignore them.

Here is a direct fan drive circuit that is otherwise similar.
IF you use the 24V for op amp supply and FET you'd need a zener on the FET gate to limit gate drive. A say 12V zener so Vgate - ground ~=12 V would be OK. Change R2 to say 10k. P1, R1, P2 could all be larger with increased voltage. They are non critical as long as you understand how they work and can adjust as required. Circuit and OK writeup here. Note that P2 operation is important. It provides "hysteresis" which controls how much diffetrence there is between fan stop and fan start temperatures. 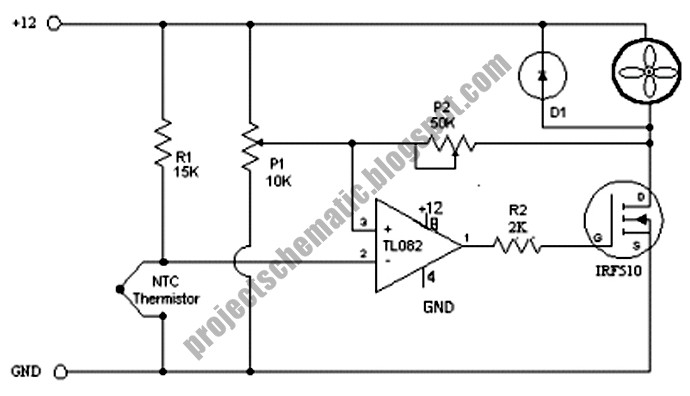 But THIS may be what you REALLY want.
You said you wanted to avoid using a PID controller.
You did not say why - and you MAY have meant that you did not want to pay the usual price for one - ie a cheap PIC controller or similar may be OK.

This simple but clever circuit is a P controller :-) (P for Proportional).
You can easily make it a sort-of PI controller

It's clever in several ways - read the referenced text to find out why.

The MOSFET is directly controlled by the NTC thermistor. As the thermistor cools is resistance goes up, the FET gets less drive, the fan slows and the cooling rate slows. Slow the fan too much and the fan can't keep the temperature down, the temperature rises, the thermistor heats, its resistance drops, the MOSFET gets driven harder the fan speeds up the emvironment cools, we are all happy. It will probably "hunt up and down". It will be fun.

The circuit is from here which gives a good writeup. You will probably have to play with R1 - make it a say 10K pot. Put a 12v zener gate to ground on the FET as above or it will die (if using 24V.)

Note that FET will heat when used like this in its linear mode. Max FET power is a bit complex due to non linear motor power_in / voltage / load relationship BUT PFET max is probably about PFAN max when fan is run on supply by itself. eg if this is a 2A 24VDC fan = 2 x 24 = 48 Watt (quite some fan!) then PFET =~~~ 48/4 = 12 Watt. YMMV. Use a heatsink. Take due care. Put FET on heatsink on exhaust side of cooled area if possible. Doesn't hurt your cooling and uses the air flow.

I said you can make it a PI controller of sorts.
Thus: Mount the thermistor on a block of thermally massive material.
To het the thermistor the system has to heat the block.
Once heated it takes a while to cool.
The longer it is at stable temperature the more it settles down.
This may be a strop of aluminum or Al plate or ... .
You can put it in the air flow to change it's cooling "I" value. Or not. Very rough. more fun. A cap from gate to ground also adds "I" but it needs to be large as the gate resistor is small. 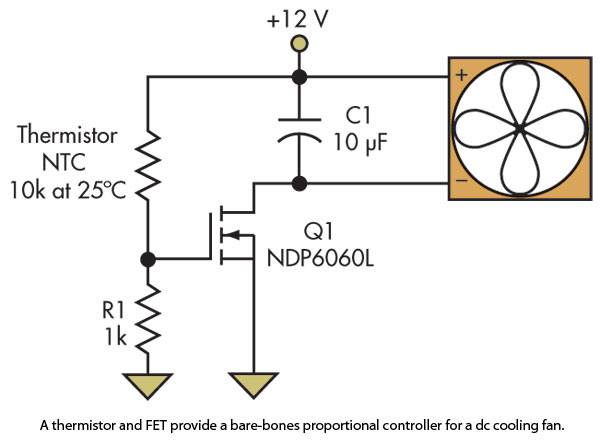 You can make this a "bang bang" controller than switches on an off with the on / off ratio being controlled by thermistor resistance. Then the FET does not get hot and needs no resistance. Usually you'd you end up back with an opamp or comparator but it can be done with just discrete parts. Ask ... .

There would be various ways of doing this, depending how accurate you want it to be.

You could use a simple comparator that turns on/off according to a set temperature and add a bit of hysteresis to prevent it cycling too quickly.

I know you say you don't want to use a PID controller, but an option would be to use a simple 8-bit microcontroller with a PID algorithm controlling a MOSFET to control the speed of the fan using PWM. With correct tuning, this would settle at a certain speed and keep the temperature stable and very close to the setpoint.
The implementation of PID for something like this is pretty simple.

As Russell has noted, some more info on what exactly you are trying to do would help to find the best answer. Things like what you are trying to keep cool/environment, maximum temperature swing +/- set point permittable, price range for components, time allocated, etc.

Not the answer you're looking for? Browse other questions tagged temperature control fan or ask your own question.