Lets suppose we have a pn junction diode made of silicon. When it is forward biased we say depletion region shrinks because electrons in the n-region are pushed towards the junction resulting in the decrease of width of positive charges layer also these electrons cross the junction and current starts flowing from n-type to p-type(electron`s flow) and the holes move opposite to the electrons flow, giving the direction of conventional current. There are no holes in the n-type and the electrons are essentially free electrons(in result of pentavent dopping) that exist in conduction band and go to p-type to fill holes and do not leave any hole behind them because they are not coming from a bond but are free electrons.

Since electron mobility is better than hole mobility, you probably want your "diffusion distance" and "carrier recombination lifetime" to be shorter for holes on the N side, and to be longer for electrons on the P side.

It's helped me to understand that holes don't "move" per se, in as much as a hole is an atom with a missing electron.

The atoms themselves are fixed in the crystal lattice.

If you have two atoms that are fixed, and one is missing an electron, if an electron moves from the other atom to fill the "hole", the location of the hole has changed, but only an electron has physically moved.

I suppose it's like a bookshelf with a missing book. If you take another book from the shelf and place it in the open slot, the location of the open slot is different, but only the book was "moved".

Holes move opposite to electrons but up to which point inside the diode?

Holes pour across the junction, and flood into the n-type material, forming a moving cloud of opposite carriers which is much wider than the depletion zone.

Don't forget that doping density in semiconductor is typically very small. Most of the silicon is neutral and insulating. Only one in ~million lattice locations supports a free electron, or supports a mobile hole. The mobile carriers behave as a very sparse, easily compressed gas, millions of times less dense than the electron-sea of a metal. When such sparse "opposite gases" come together, the particles don't instantly collide.

So, when the cloud of holes floods into the n-type side, there's plenty of empty space in the lattice, with only very few free electrons there. Occasionally a hole does meet a mobile electron. They fall together, producing neutral (insulating) silicon. The electron cancels the positive hole, and the hole "freezes" the electron in a valence bond so it no longer moves.

In a forward-biased diode, holes are pouring into the n-side, and electrons are pouring into the p-side. As they travel, the electrons in the p-side are being "eaten" by the holes there, and the cloud of electrons gradually disappears, ending up with an exponential-shaped density profile. And, in the n-side, the moving holes are being eaten by electrons, and the cloud of holes gradually thins out to nothing, with similar profile, but not necessarily the same general width. Yes, in the depletion zone some of this "cancellation of opposite clouds" occurs. But many carriers make it past the zone, and flow far into the silicon on the other side before finally meeting an opposite carrier. 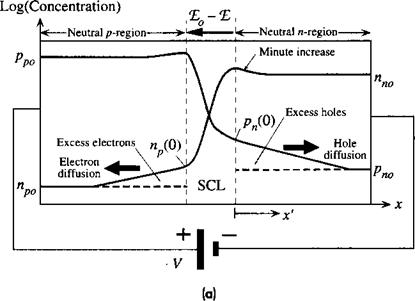 Above is a classic combination-graph of forward-biased diode, showing a graph of hole and electron population density, p-side to the left, n-side to the right. Note that it's a log scale. Note that the depletion layer is thin, while the invading clouds of mobile carriers spread to much wider distance. (In a transistor, they'd spread all the way across the entire base layer!)

PPS holes definitely do move. (Go and play with an abacus, sliding the beads around, and you'll see the moving holes.) I think many people get confused about this. It's true that protons don't jump between atoms. Only electrons do the jumping. But the jumping of electrons is causing the holes to move through the lattice. Flows of holes, hole currents, these are perfectly real. The real issue is that these aren't proton currents. A "hole" is an exposed proton, an excess positive charge. Whenever an electron then moves in from a neighboring neutral lattice site, it cancels that excess proton, but it also exposes a new excess proton behind. The "excess positive" has moved, the lattice-vacancy has move. Some people insist that holes cannot move, but they are simply wrong. Instead they should insist that positive protons cannot move! A jumping valence-band electron means that the hole has moved through the crystal, but without any protons needing to move.

It is true that holes don't move but n-type silicon has one extra electron in its outer structure notes if it migrates it will leave the hole. However, p-type silicon has a hole which is left over in its last orbit.

As the attraction force of the positive terminal battery must be more than 0.7EV for silicon or 0.3EV for germanium which is higher than attraction force by the holes in the crystal which may be around 0.025EV. The free electrons never combine with the holes in the crystal and move towards the positive terminal. This is why the diode conducts the current in forward bias mode.

Remember that free holes and the holes move. An electron leaves a hole only in the case when the electron is inside the orbit of a particular atom, if it is out of the structure the electron doesn't leave a hole.

If the electron is outside a structure then how it will exist in the case of the pn diode a silicon is doped with pentavalent impurity where four electrons fill the holes available. In the silicon and the other one is left in the free space, the +1 charges that move from atom to atom are called free electrons.