The leads of my 3-phase motor are incorrectly labeled. How do I determine the correct labels?

I connected my new-in-box 3-phase motor to my new-in-box VFD, following the instructions in both manuals and the wiring diagram on the name plate (low voltage configuration).

With the power off, the motor rotates freely and easily by hand. At 5Hz on the VFD, the motor runs in a rough, bumpy manner and I can reverse the rotation of the shaft simply by grabbing it and spinning it the other way by hand (which it then maintains indefinitely). At 10Hz, the over-current protection in the VFD is triggered.

I verified that all 3 terminals of the VFD are providing voltage.

I suspected that one of the motor coils might be burned out or shorted, but a simple continuity test shows that none of the leads are shorted to ground, and there is continuity between each pair of leads as you'd expect from this diagram. 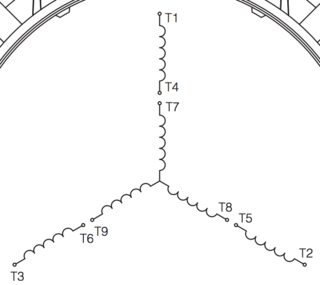 My reasoning is as follows:

So, how can I work out the proper labelling of the leads?

As a sanity check, I verified the connectivity of all 9 leads (as they are labelled on the wires themselves, T1-T9):

Preparing for Trial and Error

The next thing I needed to work out was the polarity of the other 3 windings. Lacking an analog voltmeter to attempt the method described here (listed under "I have lost track of the leads of a nine lead three phase motor. How can I re-identify these leads?"), I decided to puzzle it out through trial and error.

Note: all indications found online suggest this is a bad idea, and can cause you to burn out your motor. I relied on the current-limiting feature of the VFD to protect my equipment, and this may not be appropriate for your application.

The first step of trial and error is to get a baseline understanding of what the motor would sound like with only 3 windings working properly -- because that would indicate success.

The T7, T8, and T9 leads are perfect for this. I simply lowered the maximum current on the VFD to 1.6A (half the rated current for low voltage mode, presumably the rated current for each individual winding) and connected the VFD's 1, 2, and 3 terminals to T7, T8, and T9 (all other leads were disconnected and isolated). With the VFD at 5Hz, the motor ran with a slight amount of bumpiness but did not trigger the over-current protection and did not allow its rotation to be reversed.

Essentially, I am recreating the configuration that I used in my baseline test, but with the other 3 windings. I took one wire from each of the T1/T4, T2/T5 and T3/T6 pairs and shorted them together (e.g. T1, T5, T3) and connected the other 3 leads to the VFD's terminals. I turned on the motor at 5Hz on the VFD; if it ran more roughly than the baseline (or had one of the obvious symptoms noted earlier), I turned it off and wired up the next combination of positive and negative leads.

Note: if the motor runs in reverse, but seems fine in every other respect, you are ready to go on to the next section.

At the end of this experimentation, I was left with a configuration where the motor ran like it did in the baseline test. This gave me 2 groups of 3 leads (the shorted ones, and the ones connected to the VFD).

There are now only 12 possibilities left to check. The 3 windings need to be properly matched to their T7, T8, and T9 counterparts (6 combinations), but the groupings discovered in the previous section might be reversed.

If there appears to be no solution, then it's time to disconnect all of the T1-T6 leads from the VFD, swap that entire group with the group of 3 shorted T1-T6 leads, and start this section over again.

But for me, I found a solution and the motor started running smoothly.

Fix your labels and raise the current limit on the VFD back to what it should be.

It is hard to draw in Circuitlab, but this is a way to identify the phase sequence in induction motor with use of a light bulb.

In this diagram, the windings are properly arranged. When you apply mains voltage, the magnetic flux has a free path so the inductivity of the windings is high. The bulb would glow less brightly. 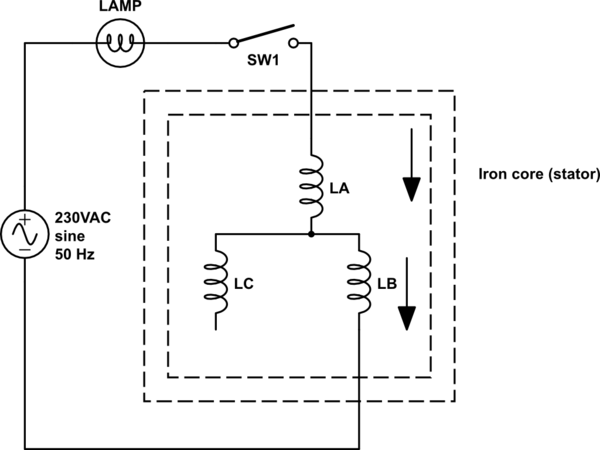 In this 2nd diagram, the windings are improperly arranged. Therefore, the magnetic fields of each winding will collide and only minimal stressed flux will form. The inductivity of series windings is now low, so the light bulb will light with full brightness. 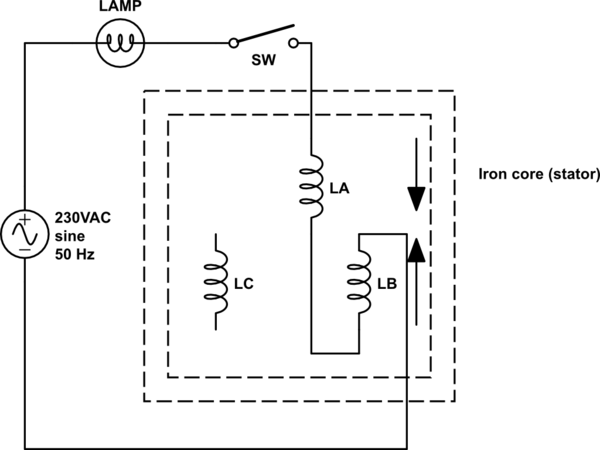 In your initial sanity check chart, I assume 1 = continuity, 0 = open circuit. You have an open circuit between terminal 7, and the center star point. There should be continuity between, 7, 8, 9, through the center point.

I've just checked your chart again, and realized it's only completed vertically, and not horizontally, so my assumption is wrong. The only other things I can think of is to check the actual resistance of the windings, and not just continuity, this would show any imbalance, also, there may be a reversed winding. You can buy cheap analog meters from market stalls, I've seen some for less than 3 Pounds, $5-ish US, since it's only a deflection that's required, it should serve it's purpose.

Not the answer you're looking for? Browse other questions tagged motor three-phase troubleshooting vfd or ask your own question.

2
How to determine phase angle of a three-phase circuit
1
How to wire 3 phase motor to VFD
0
How to wire a 5-leads single phase asynchronous motor to a 3-leads bidirectional controller?
1
How to determine a Permanent Magnet Synchronous Motor (PMSM) Nameplate?
0
2 Capacitor induction motor Humming troubleshooting
0
How to connect a three-phase motor
0
How do 3-phase dual voltage motor windings work?
0
Parameters of the 3 phase geared induction motor
2
Need help identifying wires on 3-phase single-volt AC motor (6 leads)
0
how calculate the energy use for starting a 3 phase motor until return to normal work?