What does a circuit's frequency response in dB refer to?

This is a simulated AC analysis of a small noise generating circuit. 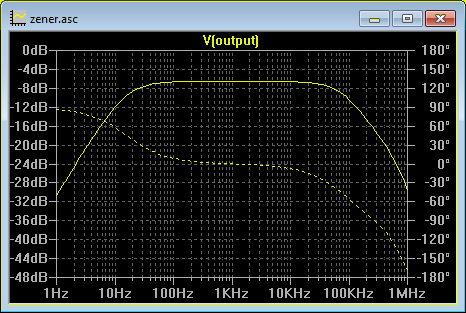 and comes from this circuit

I have one of those fundamental but embarrassing beginners questions. What does the solid curve refer to? My circuit is powered at 30V, and the LTSpice AC sweep analysis was set to an AC current amplitude of 80 nA. One of my circuit nodes is called output, and there is an output signal there of magnitude 1 V p-p. The curve is flat at approximately -7 dB, but that is a relative measure. Relative to what please?

Craig K gave the definition of the dB, so I won't need to go into it. I'd like to point out though, that the reference LTSpice specifically uses is indeed 1 SI unit of whatever you're measuring (as The Photon was assuming in the comments) so for voltages 0dB is 1V, currents it is 1A and so on. So the reference is arbitrary, and in my opinion a bit useless.

You can work around that though, by plotting specifically the ratio of the output to the input, in which case the ratio is dimensionless and unity gain gives 0dB.

For a bit more detail, see my answer here

First lets honor the gentleman who gives the capital letter "B" to dB. Alexander Graham Bell.

Where some confusion arises is when the denominator is relative to some fixed value of power. Example is RF power is usually relative to 1mW of power. So 0dBm is 1mW, 10dBm is 10mW, 20 dBm is 100mW and 30 dBm is 1.0W of power. Makes sense? Honestly it is useful to engineers but very confusing to laymen.

Another source of confusion with the dB notation is when dealing with Voltage. Remember I stated that ratios of equivalent power units are expressed in dB. Power is proportional to the Voltage squared. So if you have a -20dB attenuator it is a 10:1 divider of voltage while it is also a 100:1 divider of power. Again I'll say it is useful to engineers but very confusing to laymen.

It is relative to the amplitude of the signal (voltage or current) supply that makes the AC sweep.

A convenient way to make an AC analysis is to define clearly which supply makes the sweep.

You can double click on the voltage/current source, go to "Advanced", and define it the "Small signal AC analysis: AC amplitude" property. You can double check by placing a probe in this supply to make sure the amplitude is always the same for all frequencies.

Not the answer you're looking for? Browse other questions tagged circuit-analysis ltspice or ask your own question.

4
A question about negative dB in LTspice