I'm testing an RS-485 comms network that is having occasional problems. Looking at the waveforms on the scope it looks like fairly bad overshoot and undershoot of the voltage levels at signal edges. Is this bad enough to be causing a problem? I have never had a problem with RS-485 before, so have never actually looked at the analog signals before, so don't know what normal is. 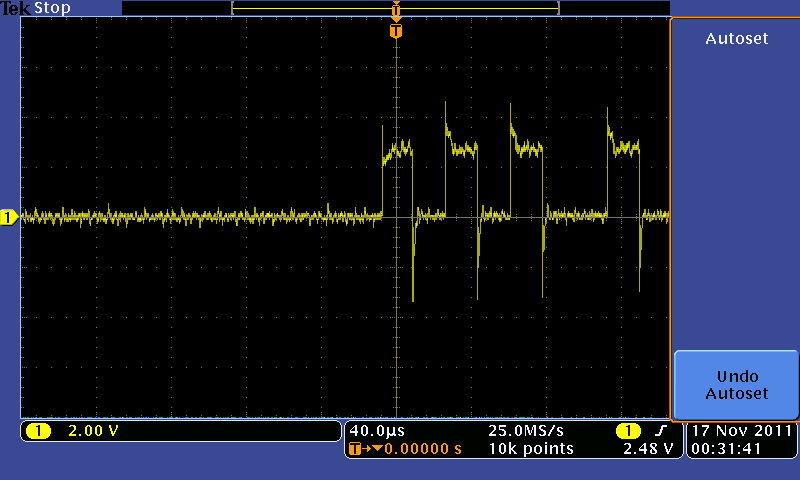 RS-485 is differential, so looking at only one line doesn't tell you much. Such spikes on a scope trace can also be more a artifact of the scope than real, especially if the scope probe ground clip is not in a good spot. So the spikes shown on the plot may or may not be a real problem. You could try putting something like a transorb clamp accross the two lines to see if that changes anything.

What is more worrisome is the amount of noise shown, but again, we can't tell if that is common mode or a artifact of bad scope probe grounding.

You now say the plot is supposedly showing the differntial signal because the scope probe ground clip was connected to one line and the tip to the other.

That doesn't add up. First, if you were really seeing the difference between the signals, then the peaks should be symmetric about ground. In other words, they should be -5 to +5 V, not 0-3 V. I suspect the scope is simply grounding one of the lines thru its wall plug ground, and then displaying the other using the wall plug ground as reference. That explains the single ended voltage level and the rather high amount of high frequency noise. Since the probe is not correctly grounded, the spikes might not really be there but rather a artifact of your flawed measurement setup.

You really know little about your signal at this point. At the very least, capture both lines independently on dual traces, and make sure the probe grounds are properly connected to the circuit ground near the transmitter chip. Until then, we really can't tell what is going on.

Don't measure differential signals using chassis/earth/ground of the oscilloscope unless you have a "differential" probe.

You're basically shorting out half of your signal via the 12AWG green wire used in the United States for 20 Amp AC circuits, referred to in the National Fire Protection Association NFPA 70 National Electric Code (NEC) as the Equipment Grounding Conductor (EGC). The EGC is a safety feature creating a ground-fault current path designed to pop a circuit breaker or blow a fuse. Your probe ground is at the same ground potential as the non-current-carrying metal parts connected to the system grounded conductor (SGC) and/or to the grounding electrode conductor (GEC) (aka ground rod/ground grid) by the EGC.

If you had picture of your RS-485 signal when a 120 ohm end of line resistor (EOLR) is used at the final termination device to match characteristic impedance of the transmission line (twisted pair wire) that prevents high Voltage Standing Wave Ratio (VSWR) reflections and you are using two channels of your scope and the math function to view the difference between channel A and channel B.

The noise and spikes you're seeing on your scope trace should go away when you look at a differential signal differentially. There should be no buildings on fire or ambulances responding to a shock or electrocution from cutting the ground connector on your oscilloscope's power plug.

Not the answer you're looking for? Browse other questions tagged rs485 or ask your own question.

14
How do I measure differential signals (like RS-485 or DMX) on an oscilloscope?