So I'm trying to control my front lights of my car using an Arduino Nano. In total there are 14 lights (including foglights and blinkers etc.). I'm using two 75HC595 shift registers to control these lights. In my car I also have 14 LEDs so I can see which lights are on. To switch the lights I wanted to use MOSFETs, but because all the lights have a common ground I must use them as a high side switch -> P-channel. I'm using the IRF4905. The lights I'm switching are 55W. At 12V the current thats flowing is around 5A, which should not be a problem, right? The problem is that the MOSFET gets really hot after a short amount of time.

This is the circuit I used to switch one light (all lights would be a huge picture). Transistor is BC547C. Relay is the standard one in my car. Couldn't find lightbulb in Fritzing so I used a Resistor (R6 is lightbulb). The value of R6 is not correct 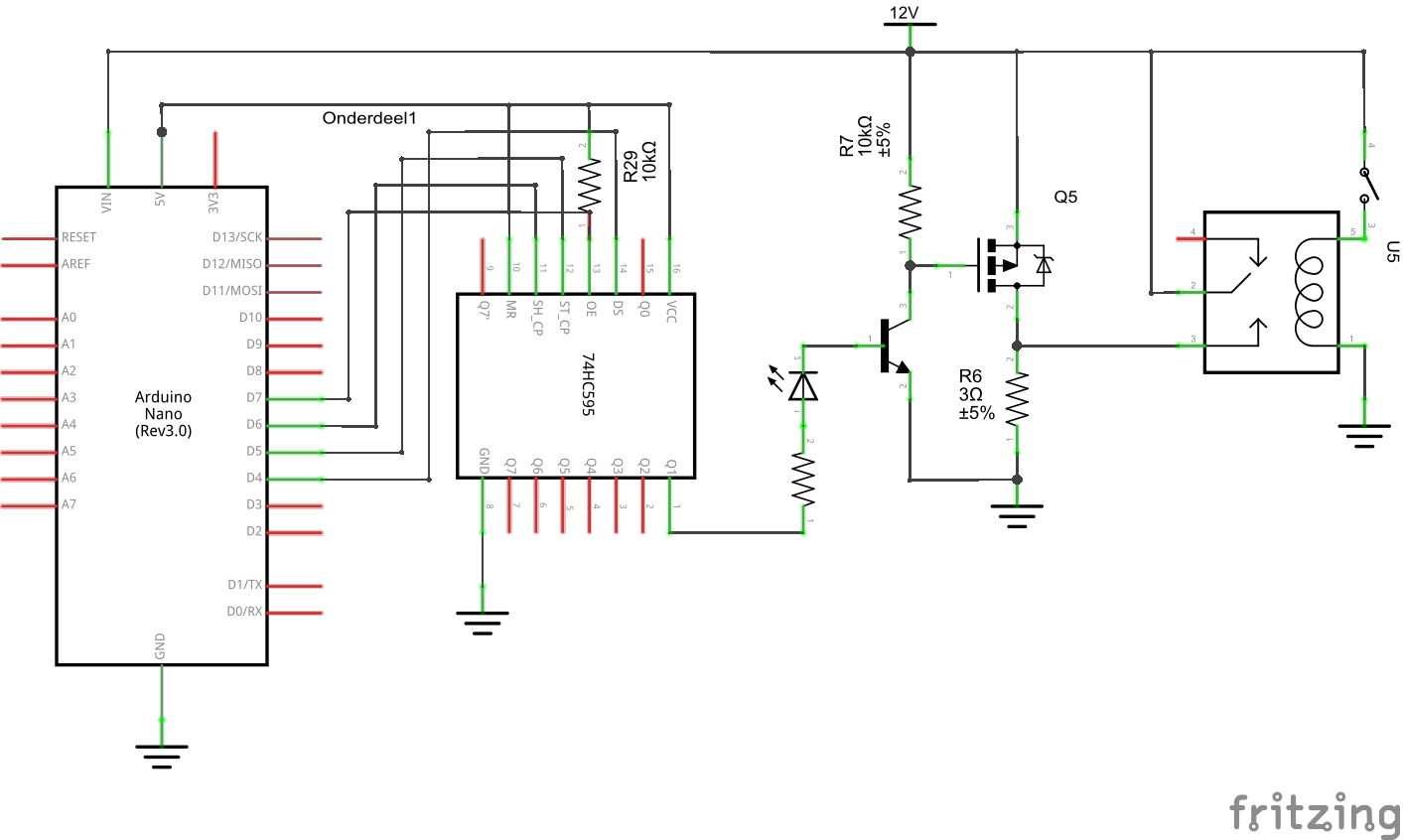 When the light is on there is about 11.52V across the (+) terminal of the battery and negative side of the light, but there is 10.85V across the light itself. So am I correct if I say there is 0.67V across the MOSFET? I measured the current and it was about 2.58A.

Edit: I've already tried to remove the 74HC595 in the circuit but it's still running hot. 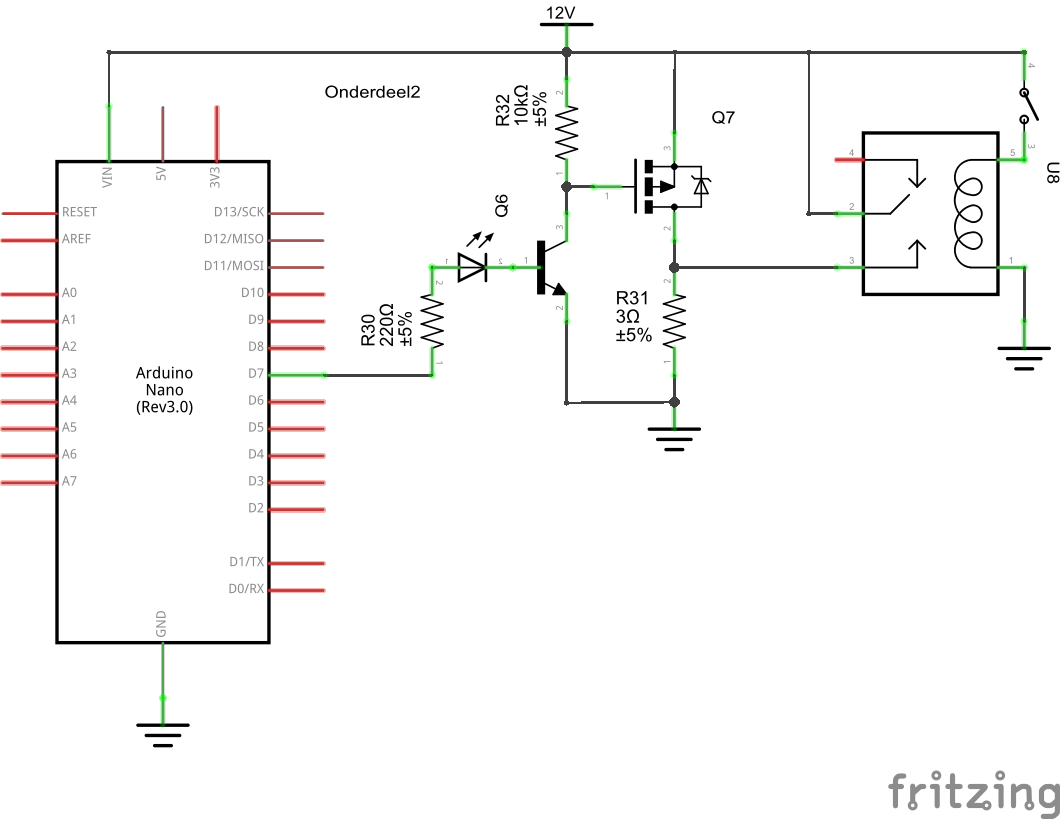 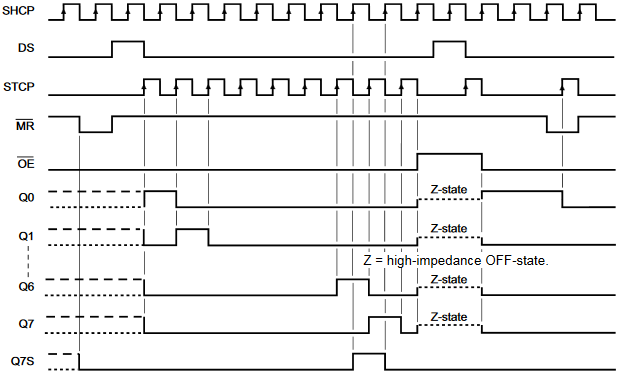 You have tied the /OE pin to the 5 V supply trough the 10 kΩ resistor R29, so the output drivers are always in the high impedance state.

Ideally no current would flow in this state, and consequently the unnamed NPN bjt would never conduct any current, but in practice there is always some leakage current present:

There is no such thing as a "BC447C", so I assume that the transistor is either a BC447, a BC547C or some other similar part. If say +1 μA was to leak from the 74CH595 output to the collector of the BJT, the transistors DC current gain (likely somewhere between 100 and 600) would cause it to conduct from 100 μA to 600 μA of current from the collector to the emitter. For example a collector current of 300 μA would lead to a voltage drop of 3 V over the 10 kΩ resistor R7, leading to a Vgs (gate to source voltage) of -3 V.

This hypothesis is consistent with what you saw (Ids of 2.58 A and Vds of 0.67V), the gate voltage must be very close to the threshold voltage (Vgsth): 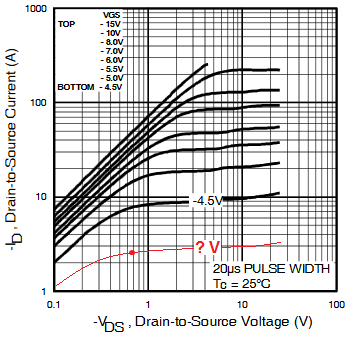 The components you have chosen are just fine for what you are doing.

We can now say that the p chan has low enough on resistance and the gate source drive volts are adequate .There is no protection for your gate so you could be damaging your fets from power supply spikes .Place a say 18V zener between gate source and try again.Another possibility is parasitic oscillations which a scope would prove or disprove .I think you should place a gate resistor in series with the gate of say 1K ohm to eliminate the possibility of parasitics. Your 12V rail should have some decoupling caps also.

I think, that the correct answer would be that the MOSFET is getting hot because it should be.

Let's make some calculations: According to datasheet of IRF4905, it has junction to ambient thermal resistance \$R_{ja}\$=62°C. Let's assume ambient temperature \$T_a\$ of 25°C and dissipated power of 1,7W. Now, according to this site: http://www.rohm.com/web/eu/tr_what7 to calculate junction temeprature you have following equation: $$T_j = T_a + R_{ja}*P$$ When you do the calculations for your case, you get junction temeprature 130°C - pretty hot, but still not hot enough to cause any damage to transistor. Still if you want to put it in some compartment, I would suggest adding a heatsink. Following circuit design advice given by jms is also a good idea.

My idea is that the ground point of MOSFET source pin is inductive as much as kicking the source voltage up and drop the gate voltage under theresold after the rising edge, causing a new inductive kick after rise of Vgs, preparing the conditions nearly same with the first kick, enough to make a stable oscillation. So, the recipe is to reduce the rising speed of turn-on voltage OR improving the ground connections.

Not the answer you're looking for? Browse other questions tagged arduino mosfet switches light pmos or ask your own question.

12
P-Channel MOSFET high side switch
2
Backup battery switch with MOSFET?
0
Switching Fuel Pump through MOSFETs instead of Relays
0
P-channel MOSFET for 100A?
2
MOSFET for 5V high-side switch
0
Switch that turns one lamp on while keeping the other one off - Mystery
1
Why does this Mosfet get Hot?
0
Using one Mosfet to control the gate pin of another Mosfet