I own a Revo Blik radio that has developed a flaw: the display doesn't completely light up anymore when activating the device. When you're close by you can make out what it says, but not from a regular distance. It sometimes flickers to full brightness a few times before failing.

I opened it up and there is a white led mounted on the side of the display, I suppose serving as its backlight. Since opening it up, it flickers constantly when the device is in operation.

I'm not really sure how to proceed from here to diagnose the problem. As a physicist and programmer, I think I have the necessary background to understand and fix the problem (if possible), but I have little experience with working with the hardware itself and specifically don't have any substantiated hypotheses as to what could cause this behavior, other than a hunch may is simply be a faulty contact along the power path to the LED, like in a buzzing lightswitch. Is that possible or doesn't that happens with these low voltages?

Does anyone have an idea what the problem may be and how I may proceed from here to fix this problem?

Edit: As requested, I added some photos. They can be seen here (if you hover over the photos, there are some descriptions of what you see, but they are not all complete; if you click on a photo, they become somewhat larger and display the full comment). The led itself is hidden under some adhesive tape that I'm not sure I should remove: I think it fixes something underneath in place, although the entire display seems to be stuck to the board pretty solidly.

@AndrejaKo: immediately after booting, the led emits at full strength for ~ one second. After that, the flickering starts. I don't have the means to identify a specific (average) frequency, but it's easily visible by the eye. I would say it's between 5 and 20 Hz: the intervals are irregular. Certainly not so slow I could count the flickers and certainly not so fast that I have a hard time seeing it is flickering.

@Oli Glaser: I've tried tapping the board and touching/pressing various components, but that didn't change anything. I'll try to get my hands on on a hairdryer and something to cool the device. I failed to identify a specific IC as the one that drives the led. I need to disassemble the device further to follow the lines.

@Majenko and JustJeff: if it's a dry joint, applying some pressure to the right component should result in the flickering stopping, right? That would be just like the buzzing lightswitch?

Based on what I read here, I have just successfully brought my Revo Blik back to life by replacing the backlight LEDs with 2x Bright White 3mm LEDs (ÂŁ0.84 each from Maplins). A window scraper blade happily cuts the adhesive that holds the LCD/Backlight/PCB together. The LCD folds out by 90deg. The backlight removal was the biggest problem as the two existing LEDs proved very difficult to unsolder. For insertion of the new LEDs I drilled the holes out to 1mm. and used high lead solder (old stock).

With the old diodes removed, the +ve voltage was +5.1V . After the new LEDs were soldered in, the anodes were at +2.24V.

The screen is now fully readable. Thanks to all previous posters for the guidance that led to my success. Bob

Hard to say without a bit more info (photo might help) but here's a few thoughts:

It's probably got a little WLED driver IC (here is an example) that's stopped regulating properly.
This could be due to one of the components involved in it's operation (inductor, diode, capacitor, etc - see datasheet) failing. It could be something to do with the dimming control if it uses it, or even power supply problems/dry solder joint somewhere.

Follow the trace from the anode of the LED to the nearest IC and take a look at it and surrounding components. Check all the solder joints look okay. You could try powering it up it, and tapping gently around this area with a plastic implement and seeing if the display lighting "responds", this can give clues as to the problem area. Also heating with hairdryer or cooling with freezer spray can tell you things.

Thanks for the pictures, they are helpful. Could you possibly take another one of the area highlighted in the picture below and also post the part number just in case it's not readable (you can gently bend the large inductor L7 leaning over it out of the way): 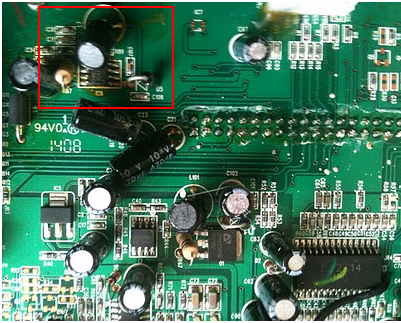 I would try tapping/wiggling the connector (the one with LED +/- on it) a bit and around the highlighted IC too.

EDIT - here is another better snip of what I think is likely to be the LED driver, although I still can't quite make out the part number (I had a couple of tries on find chips with the characters I can see but no luck): 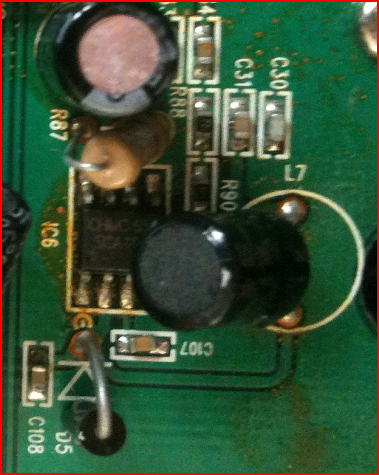 Notice what looks like it may be some corrosion around the IC, the solder joints look like they could be a potential problem. Tapping/pushing gently directly on each individual pin may locate the problem.
If the problem does lie with IC6, simply reflowing all the IC pads may fix the issue. If you do this use plenty of flux if you have it, if not at least tin your tip with some fresh solder then wipe the excess off. Don't solder the pins for too long, you should just be able to touch for a second or two and it will do the trick.

Not the answer you're looking for? Browse other questions tagged power led or ask your own question.