Trying to build a simple circuit to power a small pump while the sun is out. Here are the specifics:

I purchased a resistor that meets these requirements and hooked everything in series. (Solar panel lead to resistor, resistor to pump, and pump to other solar panel lead.

The pump does not turn on when the panel is in the sunlight. I measure the voltage coming out of the panel and it is within specification. I also tested the pump by hooking it up to a car battery and it works fine.

Any ideas what I am doing wrong?

You can estimate the V - I characteristics of your solar panel to get a general idea of the performance. Here is an estimate (corrected): 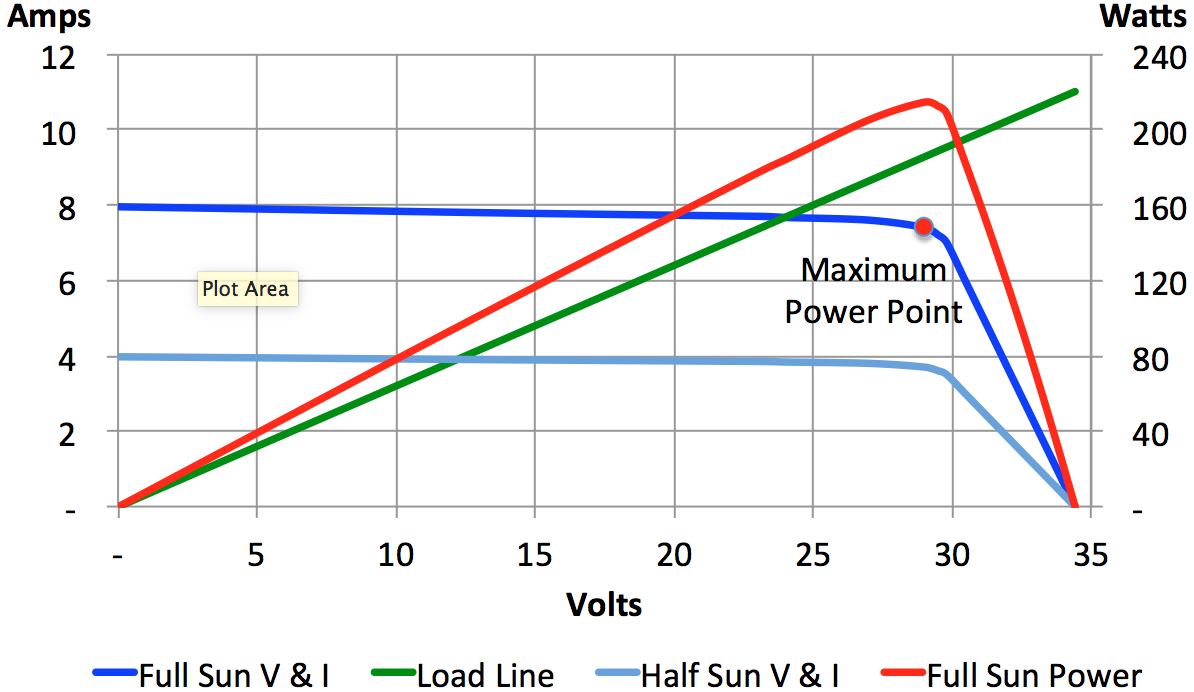 I am assuming that the 9 amps maximum motor current is the maximum continuous operating current, the current for rated motor power output. The input power to the motor for full load operation would then be 108 watts. I am also assuming that this is a permanent-magnet motor with a commutator, not a brushless motor with an electronic control or commutating circuit. The full-load losses due to the resistance of the armature winding would probably be something like 10 watts. If we assume that the resistance of the armature and brushes is (correction) 0.125 ohms, the load line of the motor plus series resistor intersects the solar-panel curve at about 24 volts and 7.7 amps. When the motor is not turning, there is no back EMF, so the solar-panel current is determined by the series resistance plus the resistance of the motor.

You need a solar panel with a maximum-power-point (MPP) voltage that is equal or slightly above the rated voltage of the motor. The MPP current can exceed the motor current rating by as much as you want, but the motor will need to be protected. It could draw too much current and overheat if there is a mechanical problem that causes an overload. The You can then connect the motor directly to the solar panel without a series resistor.

When there is less than the maximum sunlight, including the effect of the sunlight hitting the panel at an angle, the V-I curve will have a similar shape, but lower current values. At lower sun brightness, the load line will intersect the V - I curve at a lower voltage point and the motor will slow down. If it slows down too much, it could stall, so it should be turned off at some minimum speed. It could overheat even if the current is not too high because it will not cool properly if it is running too slow.

The nature of a centrifugal pump load will help with the performance.

Note that the load line with an operating motor and load will not be a straight line and will change as the motor speed changes.

Not the answer you're looking for? Browse other questions tagged motor solar-cell or ask your own question.