I am planing my first MCU board and this MCU has several pins that need VCC (3.3V). My friend suggested that I put capacitors 0.1uF near every VCC pin to remove disturbances. But if these pins are close together it looks like this: 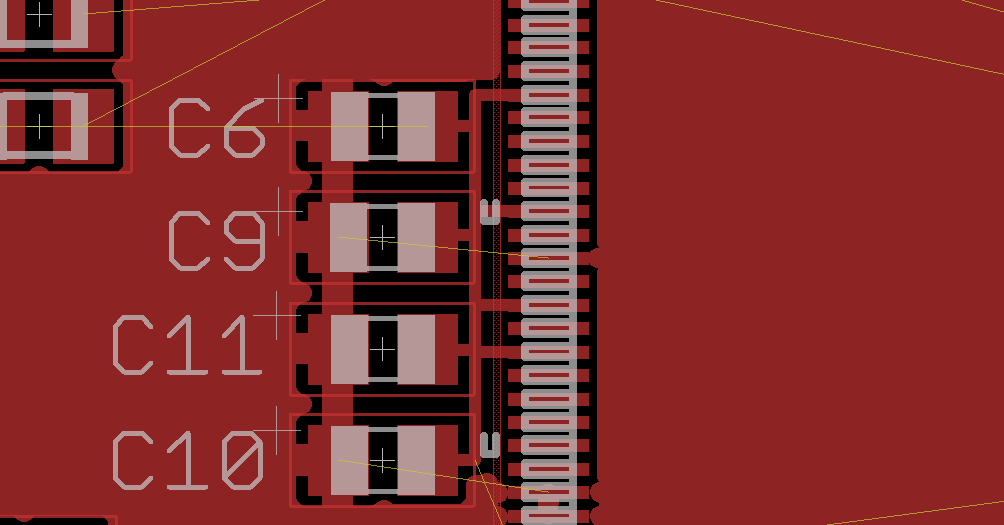 To me this looks like one big 0.4uF capacitor right? So should I only put one 0.1uF capacitor instead of 4 here? I mean: "Can I use one capacitor for multiple VCC pins if these are close together or is this not a common praxis?"

Yes. Capacitors in parallel can be added up. So, the common question that comes to mind is "Why not use one 0.4uF instead of 4 in parallel?" But the idea of using 4 0.1uF capacitors here is different.

Capacitors connected between Vcc and GND are generally called bypass capacitors. They are used to fill up the dips and variations in supply voltage. We put them close to the power rail to make sure they bypass the voltage ripple/variation before other critical components of the circuit "feel" the ripple.

The value of the bypass capacitor depends on the frequency of operation of the circuit. If you are using an AtMega 328 or similar MCU running at 16Mhz of less, 0.1uF would be enough. Your friend is right! If you are expecting higher frequencies, consider adding a couple of 0.01uF capacitors also. The exact value isn't critical but important. The smaller the capacitor, the faster it responds to variations in voltage and vice versa. High frequency signals have to be dealt with quickly. Hope you got the point.

If you plan to source small DC motors directly off the MCU board(I had built such boards for my projects), you might want to use larger capacitors(like 4700uF) because motors draw lots of current on startup and would cause huge volatge dip and that would upset all other components(MCU may reset). So a large capacitor(not a fast one) is needed to handle this.

I guess I have given you a good idea. Based on the application and size constraints of your board, choose the capacitors wisely. Bypass capacitors wouldn't hurt anyways even if you end up using more than what's required. So don't worry. What you've done looks good. All the best!

Not the answer you're looking for? Browse other questions tagged microcontroller power-supply capacitor pcb-design decoupling-capacitor or ask your own question.