How can I know the rated current of a 6v transformer?

I Connected it to the basic rectifier circuit with a voltage regulator (7805) so that the output voltage is 5V.

The transformer produces about 8V DC across the smoothing capacitor.

When I connected a 20 ohm resistor as a load, The voltage across this load resistor was about 3.75 volts.

I connected a 30 ohm resistor as a load, The voltage across this load resistor was 4.25.

I'm not sure but I think the drop in voltage is due to I'm exceeding the rated current (maximum) current that the secondary side of the transformer can handle.

My first question is How can I know or measure the rated (maximum) current of this transformer?

Second question: If the rated current does not cause the problem, What could be the reason?

Thank you very much,

However this simple calculation only applies to a purely resistive load. With a rectifier and filter capacitor the current will be drawn in short pulses during the peaks of the AC waveform, so voltage drop in the transformer will be higher. Your bridge rectifier will also drop 1.4-2V, and the capacitor voltage will droop between peaks.

Here's an LTspice simulation of your transformer/rectifier/capacitor, with a load drawing ~180mA. 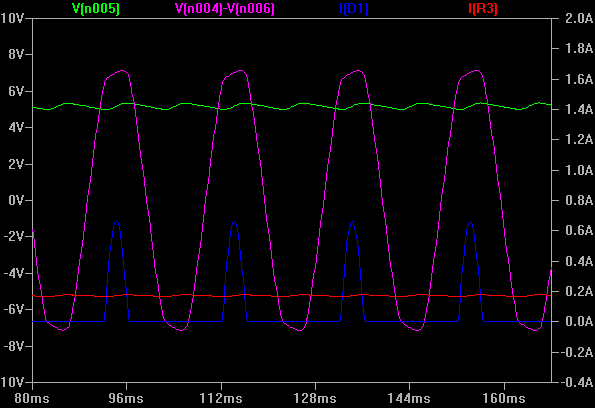 The purple trace is the AC voltage output of the transformer. The green trace is the raw DC voltage on the capacitor. Blue is current through one diode, and red is load current.

Diode current peaks at 0.66A, which causes a loss of around 1V in the transformer and 1.9V in the rectifier bridge. Finally there is about 0.35V of ripple voltage across the capacitor, so the minimum raw DC output voltage is a miserable 5.0V. This leaves nothing for the regulator to work with. The 7805 needs about 1.5V of 'headroom' to overcome its dropout voltage.

To fix this you have a couple of options. The obvious solution is to get a transformer with higher secondary voltage, eg. 8V with bridge rectifier or 15V center tapped (7.5V-0-7.5V) with two rectifier diodes.

Alternatively you could keep the transformer and try to reduce losses in the rectifier and regulator. Schottky diodes drop about 0.4V (raising the raw DC output to 6V) and an LDO regulator could drop less than 0.2V, giving you about 0.8V of headroom. That's not a lot, but might be enough if your load is not bothered by occasional mains dropouts.

It is because of rated current. Your transformer's core goes into magnetic saturation at some power, so you cannot exceed it. I guess you should change the load until the produced voltage on output is at rated voltage.

Are you sure it is rated at 6V AC (output)? All transformers when not in load produce little over rated voltage. On smoothing capacitor you would get (under no load): $$V_{dc (max)} = V_{ac} \times \sqrt{2}$$ If you get 8V, than I would expect it to be 5V rated transformer. (Under no load its voltage would be little above rated). Off course, losses on diode bridge should be calculated also. Usually they are ~0.6V per diode (on light load). You did not specified how do you rectify, half-wave (reduces 0.6) or full-wave (2x0.6V).

Because of high voltage drop you get under load, looks it is rated at small current, but it is hard to guess current without measuring.

Adding some other ways ie. By observing the physical parameters.

If you have wire gauge, you can measure the size of secondary winding according to you may find in some standard current ratings like 0.3A,0.5A.

Not the answer you're looking for? Browse other questions tagged transformer rectifier maximum-ratings or ask your own question.