I am in doubt about how to route the relay in below situation.

The thick lines(3mm) on the left are Normally Closed, Normally Open pins of the relay, and the third line(2mm but top and bottom) is Common. 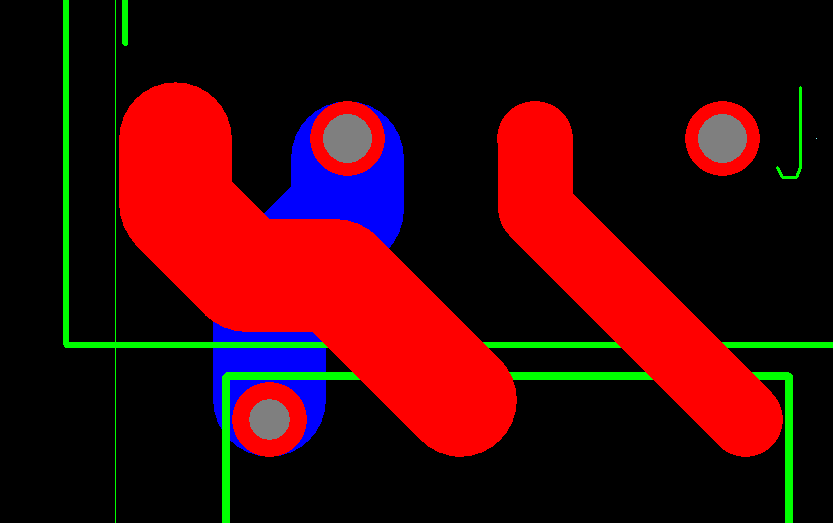 The relay is supposed to withstand 220V AC with 2A. The trace length is about 8mm The PCB is two layered PCB with 1/2 Oz copper and 1.6mm board thickness.

Is there any better way to route it? Can the routing withstand the specification?

If you want your product to be safe, for normal indoor use (office/home - dry areas) the absolute minimum recommended distance between a trace carrying 230VAC mains voltage and ANY other trace is 2.2mm.

And that number is a very old one. Usually these days "one prefers" 4mm. In that about 3.25mm would be the minimum for live traces to any low voltage or earth traces if you want official approval.

If you want to switch your 230V on and off inside a box to some pump or motor or a lamp, where there is an expectable understanding of it always being dangerous to touch, since opening the box is required, then the rules aren't as strict with the distances. Then it comes down to: What can cause a spark that will harm your device or a user in some way.

There I personally would still keep 4mm clearance at the least. If it's an inductive load probably even more.

If you put it in moist or dirty environments, or ones with risk of explosion the rules become much harder. Clearance requirements of 5mm and more and something new called creep distance, which is even higher, which means you need to have slots milled out of your PCB, to prevent dirt from accumulating between traces.

For the width of your trace I will assume: 1/2oz copper with no plating finish, i.e. end thickness 1/2oz copper and trace heating of less than 20degrees. Since the voltage losses will be negligible in such cases for 230VAC applications I won't make assumptions about those. Trace heating in this case ignores fat relay pins and the like, so it'll not even heat up that much.

I won't add all the maths, in stead I'll say that the Saturn PCB Tool is excellent for 'young designers' to play round with minimum trace properties. And I still use it myself, also for this question, since I don't have the time to calculate it more accurately.

The width of your trace is over done for 2A, but, you need to be sure no more than 2A will ever flow to be able to reduce it. If you fuse it at, let's say 3A, you can probably do with 3mm width. (if you plate the PCB with another 1/2oz to make a total of 1oz that drops to 1.5mm)

If it isn't fused in your device and only relies on external fusing of 10A/16A/20A/25A you need to design for those currents. And also are violating CE design rules, by the way. You need to have a fuse for those.

So in a pessimistic case you need to design for 25A continuous if you have no fuses, which would mean a whopping 90mm trace. (you'd want a 2oz board or thicker, really, and possible slot the solder mask to get down to 10mm)

With relay, I think the length not importance, but the length shortest is better. In some my project, I often drawn the width of net is 1mm for 1 A. You should creat a resist zone about 1.5mm from pad to safety for AC load.